As part of our programming for Black History Month, the National Gallery of Jamaica (NGJ) will be hosting a special event on Saturday February 17, 2018, at 1:30 pm entitled 21ST Century Kapo. Mallica “Kapo” Reynolds is considered to be Jamaica’s foremost Intuitive artists; and the newly reinstalled gallery features a selection of sculptures and paintings from the Larry Wirth Collection, the John Pringle Collection and the Aaron and the Marjorie Matalon Collection. The works in these galleries showcase the broad subject matter and iconography that Kapo explored and highlight the cultural significance of this artist.

The Kapo Gallery – which is one of only two NGJ galleries that are dedicated to single artists – was reopened on January 28 after being closed for almost a year; 21st Century Kapo will give the public an opportunity to learn more about this artist and engage in a discussion of his legacy and relevance to Jamaicans today.

21ST Century Kapo will feature a special screening of the archival film, Kapo the Artist, which first aired on BBC TWO in 1986. In it Kapo speaks about his life and work as an artist and Revivalist leader, it features commentary by Dr. David Boxer, Professor Rex Nettleford and Ambassador Dudley Thompson among others. The screening will be followed by a short, candid discussion between Dr. Clinton Hutton, Professor of Caribbean Political Philosophy, Culture and Aesthetics (University of the West Indies, Mona) and NGJ Senior Curator, O’Neil Lawrence.

Attendance to 21ST Century Kapo is free of cost and is open to the public. Visitors are being encouraged to view the newly reinstalled galleries prior to the beginning of the discussion. 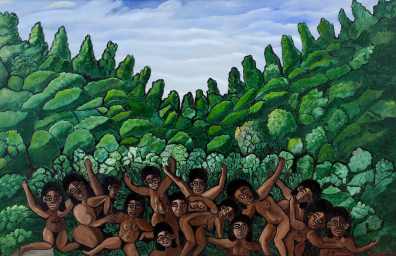 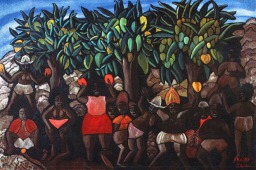 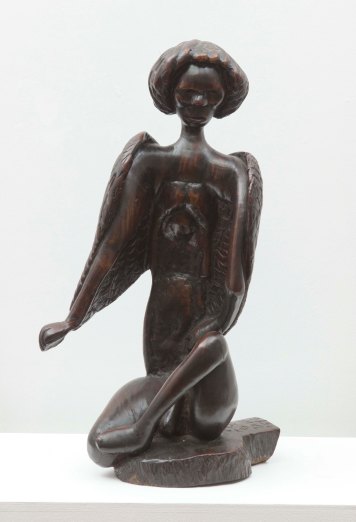 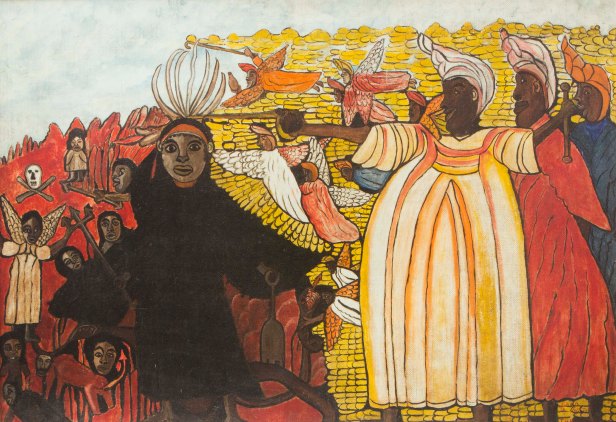 National Gallery West is pleased to present its latest exhibition Selections from the National Collection: Mallica “Kapo” Reynolds, which will be on view until mid October 2017. The exhibition is the first in a series of exhibitions that feature aspects of the National Gallery of Jamaica’s collections, while the permanent galleries in Kingston are being refurbished.

The Jamaican artist and charismatic Revivalist Bishop Mallica “Kapo” Reynolds was born in 1911 in Byndloss, a rural St. Catherine community some thirty miles from Kingston. At age sixteen he received his first vision and started traveling the countryside preaching. In the early 1930s he made his way to Kingston and settled in Trench Town where he established his Zion Revival church, the St. Michael Tabernacle. He later relocated to the Olympic Gardens community in western Kingston.

We now present the second of a three-part blog post series based on a lecture presented by NGJ Executive Director, Dr Veerle Poupeye, at the Jamaica Music Museum’s Grounation programme of February 16, 2014.

But let me now turn to the more specific instance of music and art in Jamaica. Music plays a pivotal role in Jamaican culture and this is predictably and prominently reflected in the country’s visual art. Much of this has to do with the performative character of popular, African-derived religions in Jamaica, which make very active ritual use of music and dance. The three artists who are the focus of this presentation – Kapo, Everald Brown, and Woody – all came from such context. Pioneering research was done by Olive Lewin, Janet Grant-Woodham and others on the music produced by the church communities of Kapo and Everald Brown. Not being a music specialist myself, I have little to add to the research on their music and my focus is instead on the represented and implied music in their work. Everald Brown was also an instrument-maker and his instruments qualify as works of art in their own right, so I am also discussing these in this presentation.

Mallica “Kapo” Reynolds was born in 1911 in Byndloss, St Catherine and died in 1989. He received his first vision at age 16 and started preaching in the country side. Like many young rural men and women of his generation, Kapo soon moved to Kingston in search of opportunity and settled in Trench Town, where he established his Zion Revival Church, the St Michael Tabernacle. Kapo started painting and sculpting in the 1940s and 50s and rose to local and international prominence as a major artist and cultural icon in the 1960s, aided by the support he received from Edward Seaga and also from others, such as the first Tourism Director John Pringle and the American art impresario Selden Rodman.

END_OF_DOCUMENT_TOKEN_TO_BE_REPLACED

On Tuesday, November 17, the NGJ will open an exhibition of work by Mallica “Kapo” Reynolds from its permanent collection, under the title “Selections from the Kapo Collection”. This exhibition temporarily replaces what used to be known as the Larry Wirth Gallery of Kapo’s work, which is currently closed for refurbishing and will reopen as the Kapo Galleries in early 2011, as was explained in the previous post. Below is a short biographic tribute Kapo, written by the NGJ’s Chief Curator, David Boxer, and starting with an excerpt from an autobiographic account by Kapo from the NGJ archives.

“I was born 1911 the 10th day of February in Byndloss, St. Catherine. My father’s name was David Reynolds, my mother’s name before marriage was Rebecca Morgan. My father married her when I was nine years old. At the age of 12, I received the Spirit of Conversion. I was then reading in Fifth Standard. At the age of 16 I left school; I was not bad at reading. I did not love drawing. Drawing days I used to prefer to go and work in the garden. Before the death of all my sisters and brothers, we all used to play together, go to Church and school. I can remember as far back as my creeping days, and forty years ago when I started as a self-taught artist, scraping on a stone with homemade tools, never having seen before a piece of sculpture in any medium. Then I started working steadfastly without any instruction. Happily for me guiding lights appeared in my life – a number of prominent men who took interest in my work and encouraged me.” — Kapo

END_OF_DOCUMENT_TOKEN_TO_BE_REPLACED

This is the first of two posts on Mallica “Kapo” Reynolds. In this segment, we focus on Kapo’s work in the collections of the NGJ. The second post will focus on his biography.

In 1974, when the National Gallery of Jamaica was established and the collections of modern Jamaican art transferred from the Institute of Jamaica, Kapo in terms of numbers was one of the better represented artists. There were five sculptures and seven paintings but the quality was uneven and there had been little attempt at exploring the wide range of Kapo’s iconography, his subject matter. While the fledgling National Gallery went on to acquire two further paintings directly from the artist – the large Orange Paradise and the superb Silent Night, Kapo’s unique treatment of the traditional Christmas nativity scene – it was clear that the very best Kapos of the previous decades resided in private collections. In Jamaica none could rival the collection deposited in the rooms and public spaces of the Stony Hill Hotel, domain of the inveterate Kapo collector, Larry Wirth.