The painting Road Menders, by Jamaican Intuitive Gaston Tabois (1924 – 2012), was created in 1956, six years before Jamaica achieved political Independence in 1962. It depicts a group of labourers in the process of building a road. Taking place within an idyllic tropical scene, women and men work together to ‘dig up’ the ground, lay aggregate and pour water. As they work, a steam roller operator paves the areas they had previously completed. In the background, left-hand side of the composition, another woman sits on the ground with a fire going under a vessel, perhaps cooking in preparation for when the workers take their break.

Despite the fact that Road Menders preceded 1962, its depictions symbolize major themes of Jamaican Independence, which have been used to enrich our contemporary understanding of what becoming a nation may have meant for Jamaicans, such as the ones Tabois portrayed.  These include but are not limited to, the importance of our communities as a part of social, infrastructural and economic development, and also critically, of self-determination. It is the fight for this right that helped Jamaica to achieve self-governance in 1944, a celebration of which Tabois may have considered for this painted scene. It was also the continued advocacy for that right by Jamaicans that helped to establish the new nation of Jamaica on August 6, 1962.

As we reflect on the circumstances surrounding Jamaica’s first national achievement and the progressions we have made since, let us remember that the journey of nationhood will always be ongoing, transitioning from one generation of citizens to the next. As the current generation of Jamaican people, let us remember that challenges overcome will yield the fruits of resilience, unity and insight for a greater and prosperous future. 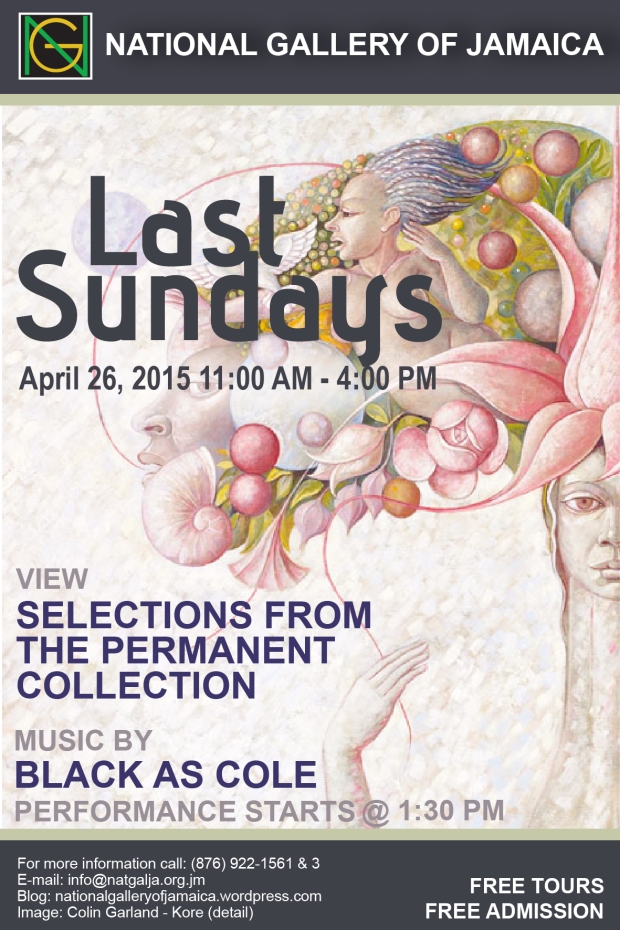 The National Gallery of Jamaica’s Last Sundays event for April 26, 2015 will feature a performance by the band BLACK as COLE.

Brainchild of songstress Cecile Black and bassist Craig Cole, BLACK as COLE’s performance style is a fusion of different genres: Alternative, Blues, Gospel, R&B, Reggae/Dub-Rock which they have integrated into a base component of Reggae and Dub; the result is a new genre that the band calls Jam-on- Dub.   Most of the band’s members became close during their time in the UWI Pop society at the Mona campus and according to the band their goal is to ‘to ignite your hearts with conscious uplifting messages of truth and love.’

BLACK as COLE performs mostly original material and cover versions are usually interpretations of songs with significant impact on the band. The band has been together for over three years and have graced a number of stages performing several times at the Jamaica Jazz & Blues Festival and venues such as Red Bones Blues Cafe’; Jamnesia; and Plug ‘n’ Play @ the Jonkanoo Lounge of the Wyndham Hotel to name a few. To date the band has released two official singles namely, ‘Musical Romance’ a R&B themed love song of how the founders of the band met; and also a Reggae cover of Adele’s ‘Hometown Glory’.

Doors will be open from 11 am to 4 pm, the performance starts at 1:30 pm. As is customary admission to the NGJ and guided tours and children’s activities will be free. The gift and coffee shop will be open for business and we welcome contributions to our donations box. The revenues from our shop and your donations help to fund programmes such as our Last Sundays. 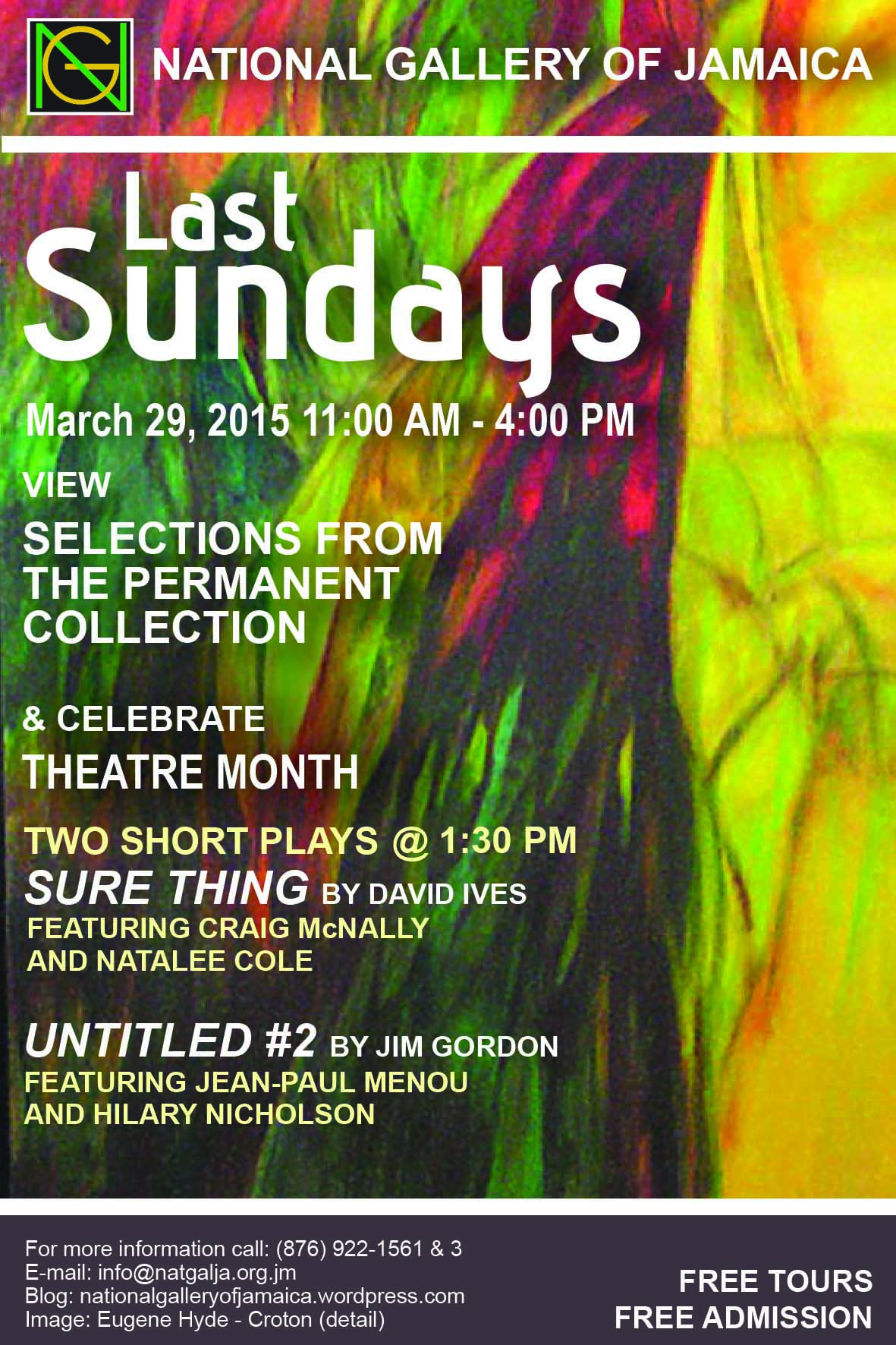 The National Gallery of Jamaica’s Last Sundays event for March 29, 2015, will feature two short plays set in the galleries, Sure Thing by David Ives and Untitled #2 by Jim Gordon, which are staged in observation of Theatre Month.

Sure Thing is a short comic play featuring a chance meeting of two characters, Betty and Bill, whose conversation is continually reset by the use of a ringing bell, starting over when one of them responds negatively to the other. The play is directed by Peter Abrikian and features Craig McNally and Natalee Cole. Untitled #2 is about two “art critics” who view a painting by one of their favourite artists in an art gallery and come to strikingly different opinions as to the meaning of the work. Caught up in a fever of contrasting artistic and political views they come close to fisticuffs before the artist appears and sets them straight. This second play is directed by Brian Heap and features Jean-Paul Menou and Hilary Nicholson.

Doors will be open from 11 am to 4 pm, the plays start 1:30 pm. As is now customary, admission to the NGJ and guided tours and children’s activities will be free. The gift and coffee shop will be open for business and contributions to the donations box are welcomed. Revenues from our shops and donations help to fund programmes such as our Last Sundays.

As has become customary for all our exhibitions, we are publishing the text panels in the In Retrospect: 40 Years of the National Gallery of Jamaica exhibition. Here is the introduction:

When the National Gallery of Jamaica (NGJ) opened its doors on November 14, 1974 it was the English-speaking Caribbean’s first national gallery, and forty years later it is the region’s oldest and largest national art museum. The recent addition of National Gallery West at the Montego Bay Cultural Centre, has further added to its reach and size. Since 1974, the NGJ has held over one hundred and thirty exhibitions and established an encyclopaedic collection of Jamaican art. Through the process of amassing and exhibiting the art of Jamaica it has done more than preserve and display Jamaica’s artistic heritage. What the NGJ has truly excelled at is telling a story (‘the’ story, the NGJ has at times claimed) of Jamaican art, crafting the raw material of artists, artworks and anecdotes into a coherent narrative that resonates with how Jamaicans see and understand themselves in the world.

When the original two-hundred and sixty-two paintings and sculptures from the Institute collection arrived in 1974, the NGJ inherited a set of artworks but not a cohesive art history and its new Director/Curator, David Boxer, who joined the staff in 1975, embarked on articulating such an art history. What we now know about Jamaican art has been the product of dedicated research and, at times, fortuitous discovery, but still the process of compiling facts and perspectives into history is a storyteller’s art. This story has been told through our exhibitions and publications, through major donations, and even through the controversies that have swirled around the NGJ from its earliest years. It is a story about personalities, about nation building and competing interests and perspectives, and about articulating who Jamaicans are as a people.

The task we have set ourselves with In Retrospect: Forty Years of the National Gallery of Jamaica is to tell the story of that story, examining with a critical eye the role the NGJ has played in establishing how Jamaican art is understood. Since our acquisitions are an integral part of that story, the exhibition consists mainly of works from our collection, supplemented with a few loans and works that are presently in acquisition. For our examination of the NGJ’s history to be manageable, decisions had to be made about what to include and what to leave out. We do not claim that this exhibition provides an exhaustive overview of the NGJ’s history—this story, too, could have been told in a number of different ways—but we have sought to represent what we consider to be key events and developments.

END_OF_DOCUMENT_TOKEN_TO_BE_REPLACED

The National Gallery of Jamaica is pleased to report that a exhibition of Jamaican art, Jamaican Art from the 1960s and 1970s, is presently on view at the National Gallery of the Cayman Islands in Grand Cayman. The exhibition, which opened on Friday, March 21 to an enthusiastic capacity audience and continues until May 15, is the second Jamaican exhibition in the Cayman Islands that was brokered between the two country’s national galleries – the first one, an exhibition of contemporary Jamaican art, was held in 2004.

The present exhibition examines Jamaican art from around Jamaica’s Independence in 1962 to the politically eventful 1970s – one of the most culturally dynamic periods in Jamaican history – and consists of thirty works from the National Gallery of Jamaica Collection and two works from Cayman-based collections of Jamaican art. It includes later works by artists who were already established at that time, such as Edna Manley, Alvin Marriott, Albert Huie, David Pottinger and Carl Abrahams, and younger artists who emerged in the 1960s and 1970s, such as Barrington Watson, Eugene Hyde, Karl Parboosingh, Osmond Watson, Judy Ann MacMillan, Mallica “Kapo” Reynolds, Everald Brown, Gaston Tabois, Hope Brooks, George Rodney and Winston Patrick. The works were selected by NGJ Executive Director Veerle Poupeye and Acting Senior Curator O’Neil Lawrence.

“The National Gallery of the Cayman Islands is delighted host Jamaica Art: 1960s & 1970s from the collection of the National Gallery of Jamaica,” says National Gallery of the Cayman Islands Director Natalie Urquhart. “This exhibition marks an important international collaboration between NGCI and NGJ, and it is an opportunity to reflect and celebrate the long-standing social, cultural and economic relationships between our two countries.” The exhibition, which is one of several planned exchanges between the two national galleries, also reflects the NGJ’s present thrust towards greater regional engagement and visibility.

Whenever our central and mezzanine galleries are not in use for our formal exhibitions, we mount selections of our permanent collection. We have just updated the display with selections from our International Collection, with a special focus on a group of works from the London Group. Here is the text panel for the London Group section of this temporary exhibit, which includes works which have not been on view for more than twenty years.

These early London Group works were brought to Jamaica for exhibition by Edna Manley in 1937. Established in 1913 to contest the dominance of the Royal Academy and its conservative view on art, the London Group is one of the world’s oldest continuing artists’ collectives and continues to promote the work of contemporary artists working outside of institutional settings.

The London Group was an influential resource for Manley and a strong connection can be seen between the painting styles of its early members and the “Institute Group”, the collection of Jamaican artists that Manley herself was instrumental in cultivating. Manley joined the London Group in 1930, the same year as British sculptor Henry Moore. Both the Group’s representational approach and interest in Modernism made it a good fit for the Jamaican nationalist school as it looked for ways to picture a forward looking and confident nation.

Frank Bowling, whose large abstract work Maverick is also shown in this gallery, is a current member of the Group, having joined in 1963. Ronald Moody’s 1938 sculptural head Tacet is from the same period as many of the London Group works shown here. Though not a member of the Group, the Jamaican born Moody lived and worked in London since the 1920’s and it is there he became a sculptor of note.