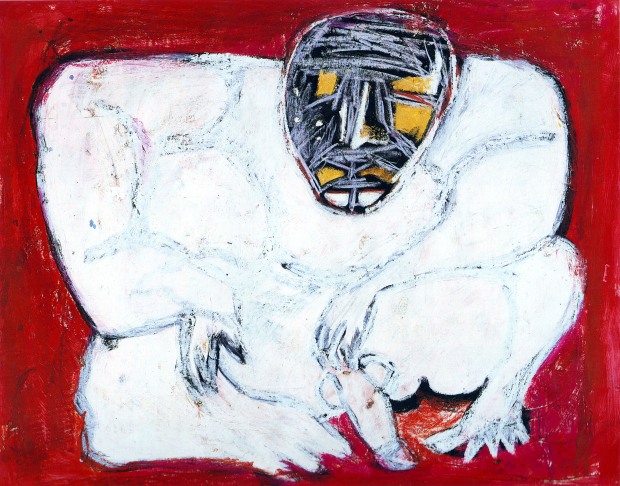 This post focuses on one of the major figures in contemporary Jamaican art, Omari S. Ra. His work also provides an interesting perspective on the symbolic significance of Haiti in the African Diaspora, which has new poignancy in the aftermath of the devastating Haiti earthquake and which has motivated the timing of this post. The text is adapted from the doctoral dissertation of Veerle Poupeye, the NGJ’s Executive Director (all rights reserved by the author).

Omari Ra, also known as Afrikan, is one of the most significant artists to emerge from the 1980s and his work has helped to define the course of contemporary Jamaican art in the last twenty-five years. He was born in Kingston in 1960 as Robert Cookhorne but later changed his name to the Afrocentric Omari S. Ra. He graduated in 1983 from what was then the Jamaica School of Art (now Edna Manley College) and has more recently completed MFA studies at the University in Massachusetts in Dartmouth. Informed by his radical African Nationalist politics, Omari Ra’s work provides provocative, satirical commentaries on the historical and contemporary issues that have shaped the African Diaspora. Ra was originally a painter, who worked mainly in mixed media and collage on paper, but his recent work includes three-dimensional objects and installations and large drawings on fabric. Ra has exhibited regularly at the National Gallery, including the National Biennials, where he won the prestigious Aaron Matalon Award in 2004, and Curator’s Eye I (2004), which was curated by Lowery Stokes-Simms, then Director of the Studio Museum in Harlem. His overseas exhibitions include the 1986 and 1994 Havana Biennale and the 1995 Johannesburg Biennale. He lectures in Painting at the Edna Manley College, where he currently also heads the Painting Department.

Omari Ra is fundamentally a political artist and his work grew out of the cultural and political aftermath of the 1980 elections, which was punctuated by the 1983 Grenada invasion and the 1985 gas riots. These events, along with the general tensions that pervaded the final years of the Cold War, the increased exposure to current events through the media, and the international success of reggae, made Jamaicans acutely aware of their vulnerability in these international conflicts but also their capacity to “talk back,” be it only symbolically. This was evident in the visual arts, in the work of artists such as Ra, but perhaps most eloquently in Peter Tosh’s final album No Nuclear War (1987). Several of Ra’s early works specifically commented on the threat of a nuclear holocaust. Peter Tosh is a crucial reference in the work of Omari Ra and his peers: with his Stratocaster guitar in the shape of an M16 gun (in effect a present from an American fan) and his aggressive image as a tall, dreadlocksed and antagonistic Black man, he was the antithesis to the more conciliatory, redemptive rhetoric that had made Bob Marley internationally popular. Omari Ra’s direct indebtedness to those more militant politics was asserted in a 1984 portrait of a crowned Tosh playing his M16 guitar.

The power of Omari Ra’s work from early on derived from a deliberate ambiguity of meaning, which set it apart from the more sloganesque political arts that have proliferated in Jamaica. In the mid 1980s, for instance, he produced a series of portrayals of beggars and street people that defied their conventional representation as passive, powerless victims. Crouched uncomfortably in the tight compositional spaces, they seem to growl and scowl at the viewer and aggressively display their sexuality, as if it were a weapon. Their confrontational stance brings to mind the concept of “dread” in Rastafari, which mobilizes the ruling elite’s fear of the unkempt “lumpen proletariat” as a source of revolutionary subaltern power.

Figure with Mask (1987), a late version of Ra’s beggar imagery, features a crouching, male nude wearing an “African” mask and with large, prominent genitals. The squat, almost rectangular, chalky white figure is set against, or rather framed by an ominous blood-red background. This visual contrast adds to the expressive power of the work and helps to foreground the brown and black mask, which acts as the visual counterpart of the prominent white phallus. It is tempting to invoke Fanon’sBlack Skin, White Masks as a clue to the significance of this work, were it not that the metaphor has been inverted. The work could perhaps be construed as a comment on primitivism, specifically on the white adaptation or usurpation of black identities, but such an explanation would also be reductive and does not account for its relationship with Ra’s previous representations of beggars and street people.

Ra’s crouching figures are confusing, irritating and enigmatic presences, which are simultaneously animalized and demeaned and heroicized and ennobled (and some wear crowns and resemble his earlier portrayal of Peter Tosh). They are early explorations of his broader thematic of race, sexuality and power which he has since explored through a variety of troubling, ironic metaphors in which animal imagery has played an increasingly important role. One such was his extended Moby Dick series of the early to mid 1990s, in which the story of the white sperm whale became a fable of white power and its discontents. Ra’s titles became longer and more poetic, with bantering sexual allusions: a key work in the series was titled The Dick is Killed (from the Opera “Samedi’s Mind Set”) (1993). Ra’s titles highlight the carnivalesque quality of his exploration of the perverse dynamics of world power, in which Baron Samedi, the lecherous Vodou divinity of death, becomes the black nemesis of the phallic white whale. 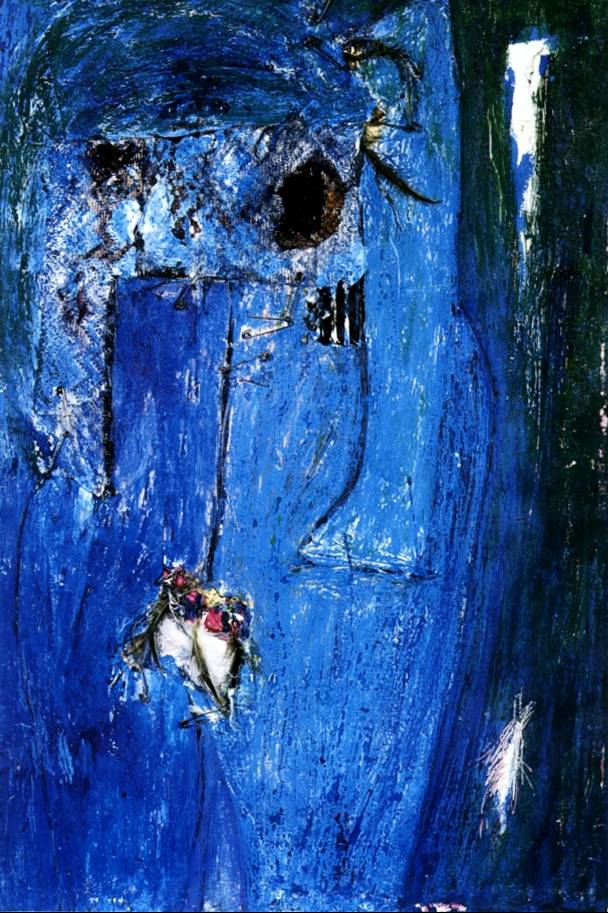 Most of Ra’s early works are on a cheap but substantial type of paper sized about 38 by 25 inches that was readily available locally in the 1980s, when many conventional art materials were scarce. Working on this surface was economical but limited the scale of his works. This he resolved by creating multi-panel images, a solution also used by other Jamaican artists who have to work in cramped living spaces but wish to produce larger works. In the earlier-mentioned The Dick is Killed, he aligned three panels horizontally, each with a section of the whale’s body: the head, body and tail. The multi-panel format added to the significance of the work: the visual slicing of the whale can also be read as a symbolic slaughter or, to extend the phallic metaphor, emasculation.

Using paper also allowed Ra to work with and within the surface, which introduced an element of violence into the creation process. Sometimes he glued several sheets together and literally slashed and hacked into the layered surface, creating patterns of wound-like fissures. He also built up the surfaces by collageing found objects and images with textured substances to create dense, crusty, weathered surfaces that were suggestive in their own right and added to the multiple meanings of the works. The use of standardized sheets of paper was ultimately too limiting and by the late 1990s, Ra was exploring larger formats without, however, reverting to conventional painting surfaces and methods. His MFA studies provided an opportunity to explore new possibilities and his subsequent full-time employment at the EMC lessened his dependence on sales and allowed him to venture into directions that are not supported by the local market. Ra then started painting on white bed sheets or other types of fabric such as military-style camouflage. This provided him with cheap, flexible large surfaces that do not require much space to work on or to store or transport. He thus moved away decisively from the conventional art object, with which his earlier work had kept an ambiguous relationship: the fabric paintings are tacked directly to the wall or casually suspended, with disregard for the polished presentation and material durability that conventionally signal value in the Jamaican art market. Fabric lacks the relative rigidity of paper, which had allowed him to create heavily built-up surfaces. Ra thus had to rely more on the image to make his statement, although he managed to create an illusion of material density with the deep darkness of the paint and charcoal images. The first such works were in black and white, although he has since re-introduced color.

Ra’s first major fabric work was Bois Caiman’s Foreign Policy Retro: Restruction Globe Shrugged (2004), which was shown in the NGJ’s 2004 National Biennial and for which he won that year’s Aaron Matalon Award. It consisted of four painted white bed sheets that were hung in a curtain-like configuration that played up the theatrical quality of the work and allowed it to dominate the mixed exhibition space in which it was shown. Each sheet bore a monumental black male portrait head in what appeared to be a military uniform from the Napoleonic period. They reminded of the historical portraits of the leaders of the Haitian Revolution, Toussaint Louverture and Jean-Jacques Dessalines, but were obviously also self-images – a shift away from the depersonalized metaphors of his earlier work. As a group of portraits exhibited together, the work also challenged the traditional portrait galleries of the metropolitan West, which are mostly concerned with “dead white males.” The work was created during the bicentenary of the Haitian Revolution and the title refers to the site of the legendary Vodou ceremony that marked the start of the rebellion. 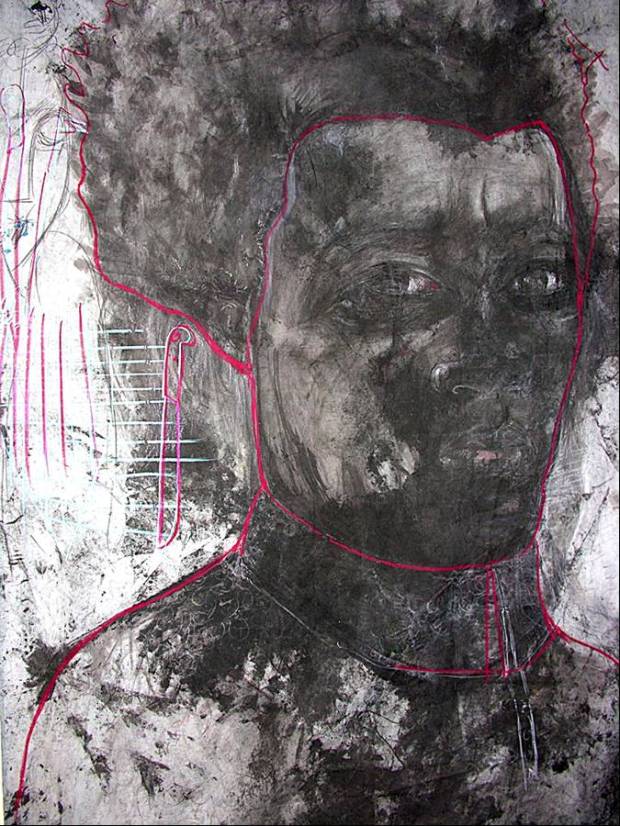 In subsequent works the references to the Haitian Revolution became more explicit and Reconstruction: Legbara in Space (2004-05) is a self-portrait in the guise of Toussaint Louverture. It more closely follows the official iconography of Toussaint, which was consolidated in 19th century portrait prints, while the background contains suggestions of a machete, the weapon/tool of the Caribbean peasantry, and linear patterns that remind of the Haitian vèvè drawings, abstracted ritual ground drawings that symbolize the various Haitian Vodou divinities. Ra thus foregrounded the association between Vodou and the Haitian Revolution as instances of rebellion and self-affirmation. The title refers to the West African trickster and crossroads or gatekeeper divinity Esu-Elegbara, or his Haitian counterpart Papa Legba, to which Toussaint’s adopted surname Louverture (“the opening” or “the opener”) may have deliberately referred. By turning this image into a self-portrait, Ra also alludes to his own subversive persona. This identification does not humanize Toussaint: with its looming monumentality and “supercharged” blackness, Ra’s portrayal turns Toussaint (and himself) into a fearsome mythological being that exemplifies his notion of Black Revolution. Ra, characteristically, raises more questions than answers but presents Haiti as a site of a crucial and as yet unresolved symbolic struggle in the Black World.

More recently, Ra’s work has critiqued the role of conventional Christian religion among the African Diaspora and actively participates in current debates about religion in historical and contemporary Jamaican society. In these works, such as 1865 Still on the Agenda (1985), he combines conventional, Western Christian iconography with symbols of violence and revolution, such as guns, and other provocative references to various Jamaican cultural practices, resulting in his most controversial statements to date. 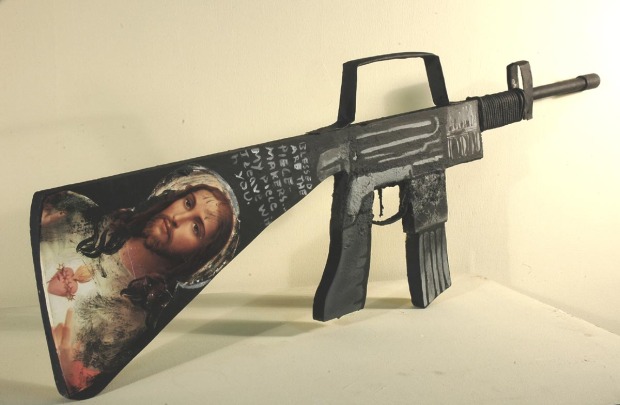