Here is part II of Wayne Cox’s catalogue essay for the exhibition Spiritual Yards: Home Ground of Jamaica’s Intuitives – Selections from the Wayne and Myrene Cox Collection, which opens on December 11. Part I can be found here.

Pastor Winston Brown created the Garden of Eden attraction at his home on the main road just east of Hope Bay, Portland. It is by far the most vibrantly colored of Jamaica’s yard shows. At the roadside, he has signs with spiritual messages, seals, rows of zinc panels, even his whole house, all covered with unique patterning. He preaches occasionally in the area, sermonizing on his visions. 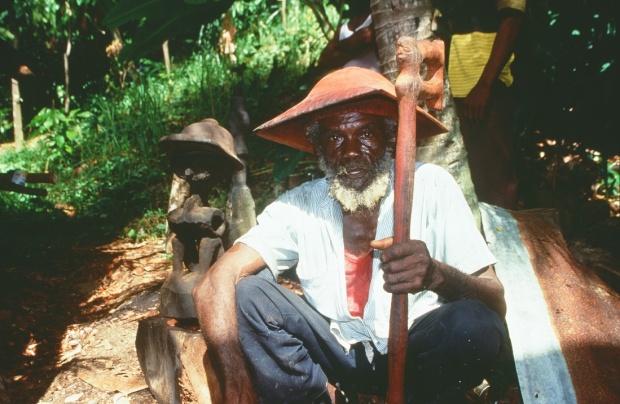 Errol Lloyd Atherton lived back in the countryside in Albany, St Mary. He knew the power of carved effigies from his father Vincent who carved to help him gain control over unpredictable forces. Vincent carved highly evocative heads, the tops of which were carved out or burned out, becoming vessels. In 1999, he carved two figures—one to propitiate the century leaving and another to welcome the new one arriving.  His son Lloyd was known as “Powah” in part because of the “powah” his yard possessed.[1] He participated in Kumina-influenced “Bongo” meetings that brought forth spirit possession, particularly, by the ancestors.

Lloyd displayed numerous stands on bamboo poles, many holding highly charged figures carved by his father or himself. On some he added material such as dried herbs, libations, metal objects and toy figures. The zinc at the border of his yard was painted with messages to please the ancestors. He hung a three-meter long strap of metal he says was an earlier relative’s gong. A gowned figure hung in effigy from a tree high above his front gate. He incised panels of zinc fencing, some in the shape of crosses, with designs and spirit words. Backlit by the sun, the panel’s spirit message would shine through. He placed round objects reflecting the power of the circle passed down from the Kongo cosmogram that evokes the redemptive healing of the daily movement of the sun where the day’s troubles are lifted each night during one’s time with the ancestors when the sun goes below the ground.[2] 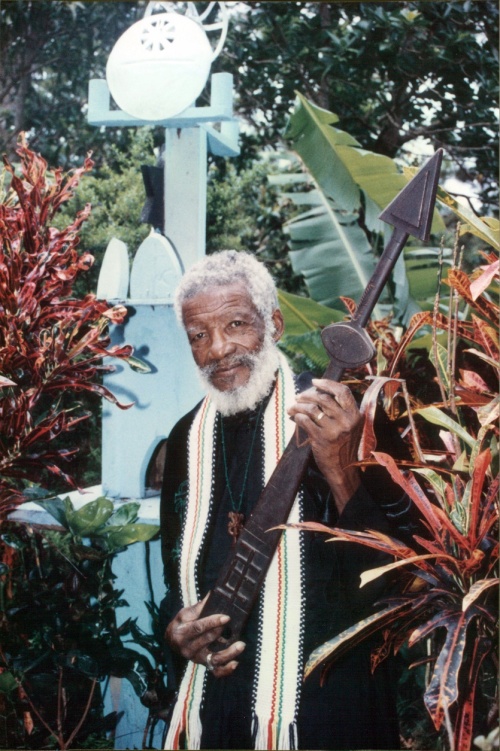 Some of Everald Brown’s earliest images at his church on Spanish Town Road in Kingston invoke his creolized knowledge of the cosmogram in both its circle and diamond forms. Among his first paintings were ones of each archangel.  In Outer Circle, he painted an aerial view of a plan for a future spirit yard. It included the cosmogram in its circle form with the initial of each archangel at its corners. The plan included an antenna surmounted by a symbolic object, which he built at his later home in Murray Mountain. There he also built seals on poles. A spot in his yard was marked SIS (Spiritual Inner Self), the importance of inner vision he learned from his Rastafarian tutor Joseph Hibbert.[3] He used what nature provided—croton leaves for divination and the images on the limestone where he saw biblical images. 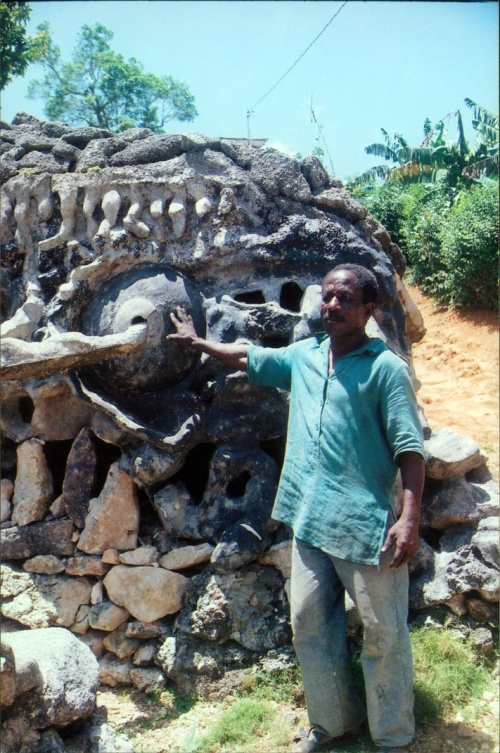 Thirty years ago, Errol McKenzie in Walderston, Manchester, placed his life in service to a spirit figure, the Moon Mother. “She talks to me every day, and tells me what to do.”[4] And he does. She exists in varying forms. In the 1980s, in her guise as the Black Moon Mother, she told him to build her a house in stone in the form of her body and include ways to protect her. He did and he lives in the house.

At the front of the house is the Black Moon Mother’s head, the features of which are apparent only after McKenzie explains them. On the inside walls he constructed vines he views as spiritually beneficial through a Bible reference and the word association de vine means divine. Much of what he carved uses a singular biomorphic or botanical language. He called one room the womb room. It had an uneven low ceiling. Embossed on a section of the floor were concrete humps. These, he said, were the seeds of the Black Moon Mother.

This admiration is not shared by some who live nearby. His devotion to and display of a god others do not know nor wish to know causes some to fear him. Similarly, just beyond the border of Brother Brown’s yard was a rusted abandoned pickup. I asked a neighbor about it. He said it was there to protect people like him from Brother Brown. Like most Intuitives, McKenzie is privy to visions others are not—visions that carry a moral burden to serve. For these culture-bearers, that is their sacrifice. And that is their gift.

Wayne Cox and his wife Myrene have collected and documented the work of Jamaica’s Intuitives for 30 years. Their homes in Port Maria and in Royal Palm Beach, Florida, serve as important repositories of the work of these artists. Works of the Wayne and Myrene Cox Collection have been widely exhibited internationally. Wayne has written exhibition catalogue essays for a number of exhibitions, including “Intuitives III” at the National Gallery of Jamaica. He has presented at symposiums including “Taking the Road Less Traveled: Built Environments of Vernacular Artists” at the Kohler Art Center and “Uncommon Visions” at the American Folk Art Museum in the United States. In 2005, Art and Antiques named the Coxes to their list of the “Top 100 Art Collectors in the United States.”  Wayne Cox’s email is artjamaica2@yahoo.com.

[1] Powah is Jamaican Patwa for “power.”

[2] “The priests of Bakongo mapped the journey of the soul within an ancient series of geometric cosmograms. Circles or diamonds or spiral-from designs were used to encode a central message of the classical religion: woman as such or man as such are seconds suns, born in the east, flourishing in the north, fading in the east, and spiritually reborn as ancestors in the south…In Black North America, (the symbol took on additional meaning), under the apparent influence of Revelations 7:1, to ‘the four corners of the world,’ or ‘the four winds of heaven.’” (Robert Farris Thompson. Another Face of the Diamond. New York: INTAR Latin American Gallery, 1988, p29).

[3] Joseph Hibbert was one of the pioneers of Rastafari in Jamaica and represents its religious, mystical side. (Leonard Barrett. The Rastafarians: The Dreadlocks of Jamaica. London: Heineman, 1977. p82-83)

One thought on “YARD POWAH by Wayne Cox – Part II”