The Girl and the Magpie – installation view

We at the NGJ are committed to fostering critical dialogue and our exhibitions are designed to do just that. The current New Roots: 10 Emerging Artists exhibition is a perfect example and it has already elicited a variety of responses, informal and in writing – we welcome both. This morning we received the following comment from a George Blackwell to one of our posts on the exhibition:

The New Roots Exhibition at the National Gallery of Jamaica is interesting to take note of for several reasons. Firstly, ‘New Roots’, as the title suggests, betrays a desperate bid to get away from any serious discourse that foregrounds the black as the essential constituent in local identity matters. Therefore, the exhibition is insipidly curated to avoid this discussion.

Secondly, new routes are not really new. Videos, installations, animations and graffiti art have had enduring presence in Jamaican art. Nor are the directions and messages of the respective artists new. What is new, however, is the irrational extent to which the curators have gone to scrape the barrel to find people who have no skills or claims to the art making process regardless of the media or medium they choose to work with.

The short film by Saulter suffers from a lack of interesting camera angles and a powerful metaphor has been sacrificed to a gruffly overdone gabble posing as narrative. The other videos are for the most part jejune, the entertainment value and cultural schmaltz become part of the naked technological seduction, while artistic endeavor is absent.

Nor is the graffiti display new. What is new about it is that though most graffiti works display a competent level of intellectual finesse in their political charge and their artistic ambitions, in McCarthy’s case, one would have to dig deep into the dense layer of clichés to find any smidgen of such. This he compensated for by his PR teamwork and media savvy.

But there is some hope for the exhibition, and one would find it in the many self-portraits of Camille Chedda.  Although they suffered from curatorial ineptitude, the work manages to prevail. The many faces with active orbiting eyes seem to establish the authority of probing into the human souls as the heads traverse and deliquesce into the cycles of life, death and decay without flinching from the inevitable human condition of temporality. Chedda is not interested in the new, whatever that is, but is more apt to improvise and invent by way of reduction and deduction along the trajectories where materials and medium coalesce in a profound sense of aesthetic imperative.

Finally, if I were the Magpie I would dissociate myself from the girl, as I think by myself I could make a better showing of my love for trinkets and shiny things.

To this comment, our former Senior Curator Nicole Smythe-Johnson, who was part of the curatorial team for New Roots, penned the following response (and the rest of our team could not have put it better):

Thank you so much for your witty and thorough response to the exhibition. It is always a pleasure to encounter someone who displays such unbridled passion for art, and in writing- all the better for a good, solid debate.

As one of the curators working on that exhibition, I am not only happy to see such a strong response to the show, but I am keen to keep the conversation going. You have brought up some good points, but I think the discourse could benefit from an expansion of the terms of reference.

You have made some interesting points about the exhibition’s title, claiming that it “betrays a desperate bid to get away from any serious discourse that foregrounds the black as the essential constituent in local identity matters.” You are correct, but I would take your point further. Let us expand the terms of the discussion so that it becomes visible that the title could equally be said to:

“betray a desperate bid to get away from any serious discourse that foregrounds any single essential constituent in local identity matters.”

I want to point out that my small adjustment to your sentence, does not make your original statement untrue. It merely expands the terms of reference, so that the conversation is not about “blackness” and what its relative weight and density is in the set of “all (non-essential and essential) constituents of national identity”.  Rather, the conversation is expanded, more nuanced, and attentive to the ways in which the concept of identity itself is re-configuring itself to make way for more inclusive, multiple and flexible articulations. 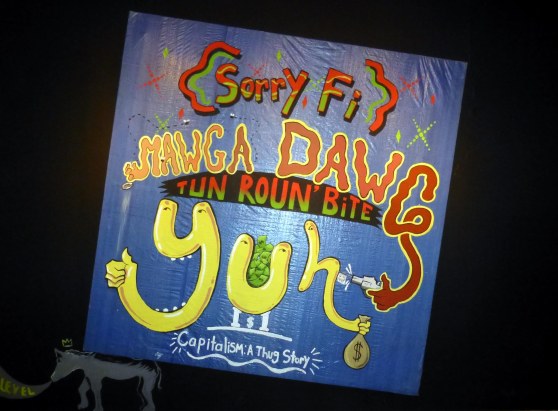 I think that this is a good development. Why? Because at the moment, I am far less worried about “whitewashing” of the nation, than I am about the havoc that fixed and exclusive models of identity (and even humanity) are wreaking on our society. An exclusive model of Jamaican identity is at the root (pun intended) of the violence and lack of protection from the state that Jamaican born-and-bred LGBTQ communities face. I would go further to say that a related exclusive model of humanity is at the “root” of the grip that violence (in all its hateful, annihilating and neglectful forms) holds on Jamaican society in general. Ikem Smith’s 2063, McCarthy’s “sorry fi mawga dawg” piece, and even Varun Baker’s revelation of Joshua Brown’s humanity from under the shadow of an alienating, silencing other-ness, all index this exclusionary and divisive aspect of contemporary Jamaican-ness.

From the perspective of the curatorial team and at least some of the artists, “New Roots” – the title and the exhibition – is not about “new-ness”. Instead, the title operates through it’s oxymoronic potential. As you point out, “new routes are not really new”. We know. That’s the point.  “New” always comes from somewhere, always references some history. There is no newness, without a “root” from which it departs. The works themselves and their curatorial context invite you to think about the ways that these two “constituents” of identity – newness and rootedness – are always simultaneously active and in dialectical relation to each other. They are equally essential constituents – to use your language – of contemporary Jamaican art, culture and identity.

Hence, what you refer to as McCarthy’s “dense layer of clichés”, and “PR teamwork and media savvy” are precisely the point. McCarthy’s work is about symbolism, clichés, visual lineages and mining the contradictions and potential implicit in all of these trusted forms of knowledge (and self-knowledge). He is also interested in the fate of Jamaican graffiti and signage, as they compete with more recent developments in printing technology and society’s more cosmopolitan tastes that look disdainfully on local and traditional forms. His work is about demonstrating the continued relevance of Jamaican sign-painting, graffiti and lyrical traditions. And, if the enthusiastic reception of visitors of all ages and backgrounds is any indication, the work is finding resonance with many. 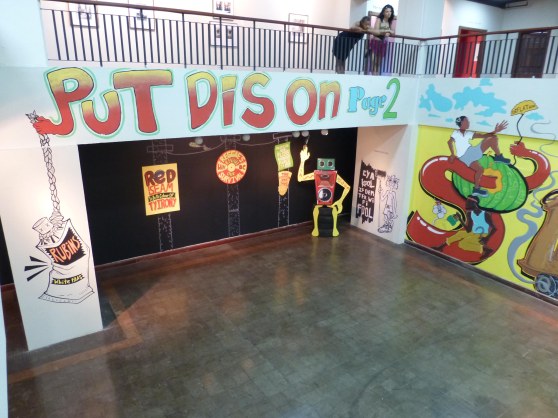 It is not that McCarthy’s work is above reproach. In fact, giving these artists the opportunity to test a long-seeding idea – noting its limitations, strengths and potential for development- and providing opportunities for critical and constructive engagement with a community was one of the curatorial team’s aims in planning the project. A number of participating artists, have also told me that they found this aspect of the project to be the most rewarding.

So… constructive criticism is welcome. I instead take issue with the extent to which your assertions about his work, and others, suffers from a narrowness of focus, and unwillingness to acknowledge nuance or multiplicity. Thereby, limiting the discourse to a realm that McCarthy’s work (and much of the work in the show) does not give credence to or take seriously, but instead tease- as people tease dogs when they know that a sturdy fence protects them from coming to any real harm.

As for your comments on Nile Saulter’s work, they suffer from the same narrowness of focus. Your assertion that: “powerful metaphor has been sacrificed to a gruffly overdone gabble posing as narrative,” fails to grasp the fact that Saulter did not aspire to the creation of a “narrative” (in the traditional sense), and overlooks the potential for the “powerful metaphor” to be articulated in a non-narrative format. Incidentally, non-normative approaches to narrative is one of Nile Saulter’s fascinations as a filmmaker. Additionally, your clear identification of the “powerful metaphor” within the work, suggests that you got more out of the “gabble” than you let on. 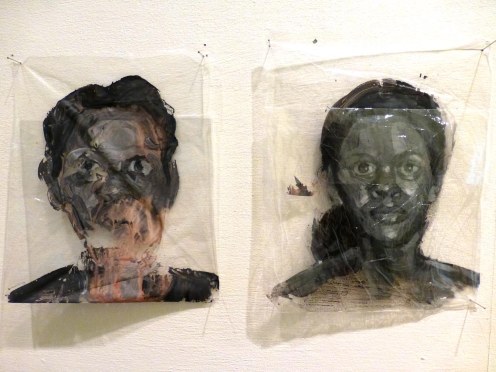 I will not dignify your extremely subjective (and more than a little nasty) comments on Girl and the Magpie’s work with a reply. As I’m sure you are aware, those comments lack the density to facilitate worthwhile engagement. Furthermore, your better articulated comments on Saulter and McCarthy’s work, and your apt reading of Camille Chedda’s work over-shadow it. It strikes me as churlish and mean-spirited, when the conversation really calls for sophisticated and rigorous analysis.

Nonetheless thank you for your contribution and the invitation to spirited debate. I hope to hear from you again,

We hope that this exchange will jump-start further debate, on the comments made by both and on the exhibition, and we invite you wholeheartedly to participate, by commenting on the present post or by contacting us via Facebook or email (please use info@natgalja.org.jm)

And we do want to see robust debate but we also want to stay on the proverbial high road. So, in case there is temptation for things to get too spirited, please check our community standards before you submit a post.

10 thoughts on “New Roots: An Invitation to Dialogue”