Croton Series (1964) is a part of Eugene Hyde‘s flower series. For most of his career, Hyde’s stylistic approach was adventurous and foreign to Jamaican audiences who were unfamiliar with abstraction and more inclined towards classical realist art. He is considered a major force in the development of abstract art in Jamaica and saw himself as something of an outsider to the local art scene. In the mid-1960’s, Hyde’s work began to reflect a strong Abstract Expressionist influence, the Croton Series exemplifies this moment.

Abstract Expressionism is an art movement that gained prominence in post-World War II America (mid to late 1940s). The movement is characterised by a combination of the emotional intensity and self-denial of the German Expressionists with the anti-figurative aesthetic of earlier abstract movements such as Futurism and the Bauhaus. Elements of abstract expressionism such as  dynamism and movement in form, shape and space characterize Croton Series and other such works by Hyde. The works use of sweeping movements of gradating colours to imply form is also typically Abstract Expressionist. Though Hyde was interested in abstraction, his work never became strictly formalist as was the tendency with European and American abstract movements. He re-interpreted abstraction to suit the Jamaican context, always maintaining a representational element in his compositions. 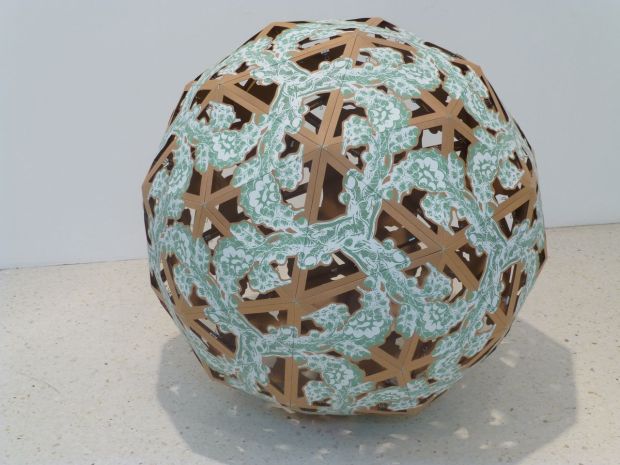 Transporter 6 is a part of an ongoing project that Charles Campbell started in 2011. According to Campbell’s website: ”The Transporter Project inhabits the interstices of a number of artistic, and political concerns. Begun initially as a visual investigation of the phenomenon of forced migration, the work also combines the desire to find a more material form for the motifs inhabiting my paintings with an emerging interest in the play between various aspirational futures and the present.”

Like much  of the Transporter series, this work utilises Richard Buckminster Fuller’s geodesic dome concept. Fuller (1895– 1983) was an American architect, systems theorist, designer and futurist. Though he is not the inventor of the geodesic dome, he is credited with popularising the structure. Fuller envisioned the dome as a part of a rational utopian future built on his environmental sustainability concerns and exploration of nature’s constructing principles to find design solutions that facilitated doing more with less.

Hand-printed on the pieces that come together to create the Transporter 6 dome is an image of lung bronchioles. The colour of the prints makes a link between the human body and nature. On first glance, this human form appears to be some kind of vine. The significance of lungs, and especially bronchioles, for this work can be read in many ways. One possibility is to consider bronchioles as sites of transmutation within the human body. There, inhaled gases (oxygen etc) are absorbed into the blood stream and made a part of the body. When combined with the aspirational futures indexed by the geodesic dome and Campbell’s longstanding fascination with the Caribbean’s violent colonial history it is possible to view the work as a delicate but ultimately hopeful statement, expressing the desire for the transformation of fraught pasts into politically viable, brighter futures.

A closer look at Deborah Anzinger’s work in the Natural Histories Exhibition:

Instability is a major theme in much of Deborah Anzinger’s recent work. In both Gone and Lizard Anzinger uses images of nature as a means to reference anxieties around the instability of life- which she experiences as an“urgent sense of mortality”. This is paralleled with an anxiety around representation, which is always dual in so far as it is both the thing it represents and not. The word “tree” is a tree- in so far as it signifies one- and at the same time is not a tree in so far as it is only a four-letter word.

In Gone the thick, almost sculptural rendering of the words makes the text at once tactile and symbolic, their duality as signs is made visible through their excessive physicality. Similarly, the photograph floating in the corner is from a visit to her family’s rural farmland in Maroon Town, Jamaica; the figures in the image are Anzinger’s sister and two friends coming out of a cave. The image is completely un-moored, out of context, and like the words, made to bear both what it represents (the memory of “back” then/there) and its unstable status as image, capable of being made to mean many things and/or nothing. Taken together, the work stages an interrogation of representation at the level of form, and an interrogation of the concept of“belonging”at the level of content.

In Lizard (the video piece to be found in the next room), the ethereality of nature and looming mortality are again the focus. As in Gone, this is paralleled with an anxiety around the unstable sign. The video seems to perform the instability of the sign“lizard”. A feared creature for many Jamaicans including Anzinger, the lizard is here transformed by natural processes into a sad carcass of little interest to anyone, and further transmutated into art object by abrupt infusions of a distinctly synthetic yellow. In the artist’s own words, the work is“an oscillation between tactile physical experience and representative language”.

We continue our features on the Natural Histories exhibition with a series of extended labels on specific objects and works of art in the exhibition.

African-American artist Fred Wison has argued that ’objects have memories”. Taking his argument seriously, this object is an exemplary case. This selection of woods was collected by Jamaica’s Public Work Department for Jamaica’s Great Exhibition of 1891.

The Great Exhibition was inspired by the many international exhibitions and world fairs of that period, particularly the 1851 Great Exhibition at London’s Crystal Palace. The newly founded Institute of Jamaica played a major role in the development of the project. And according to historian and educator Dr. Rebecca Tortello, the exhibition ”did much for promoting Jamaica and awakening the world to the creative talent and industry of its people as well as the beauty and possibility of the land itself.” (”The Great Exhibition of 1891: Jamaica on Show” The Jamaica Gleaner). As Tony Bennett has pointed out in his book The Birth of the Museum, the great exhibition and related world fair model is foundational in the development of modern museums (such as our own National Gallery and the Institute of Jamaica’s other museum divisions) and illustrates their connection to notions of empire. One only has to consider the fact that Jamaica’s Great Exhibition was originally conceived as part of the permanent Colonial Exhibition in the Imperial Institute, which opened in London in May 1891 to see the imperial ideology embedded within the project.

END_OF_DOCUMENT_TOKEN_TO_BE_REPLACED

Another post on Natural Histories, written by Nicole Smythe Johnson.

We end in earth, from earth began.
In our own entrails, genesis.

Natural History has always figured strongly in visions of Jamaica. It is in the way the plantation system and its legacy orders the people of the region; classifying them into races, classes, colours etc. It is also in the use of bucolic landscapes as pro-slavery propaganda in the eighteenth and nineteenth centuries. Today, in much of the world, Jamaica and the Caribbean are still visualized primarily as a tourist paradise of sun and sand, rainforests, tropical birds and flowers. This exhibition looks at the ways that Jamaican artists of the past and present have engaged this recurring aspect of how the region is visioned. Whether artists are challenging, re-interpreting or celebrating Natural History discourse, the conversations these works stage show the myriad ways in which nature and the study of it figure into how we understand ourselves and our experience of the world.

The trend is not unique to Jamaica or visual art. Versions of this conversation can be found in many of the Caribbean region’s creative outputs, which makes sense given the shared history of transatlantic slavery and cultural blending. In literature, writers like St. Lucian Derek Walcott and Guyanese Wilson Harris engage similar themes. Thinkers such as Martinican Edouard Glissant and Antonio Benitez Rojo of Cuba use the region’s natural features, particularly the sea, as a means to explore cultural, historical and geopolitical features of the Caribbean. Nature also figures strongly in the work of visual artists such as Cuba’s Wifredo Lam and Puerto Rican Arnaldo Roche Rabell.

This exhibition also builds on previous exhibitions such as the Institute of Jamaica’s 2007 Materialising Slavery exhibition which featured an installation by African American artist Fred Wilson. Wilson’s  installation, An Account of a Voyage to Jamaica with the Unnatural History of That Place re-contextualised some of the Institute’s natural history and ethnographic collections to bring unexamined assumptions about power, place, privilege, and history to light. Another important reference is Susan Vogel’s 1988 exhibition Art/Artifact which sought to re-think the West’s engagement with African art by placing objects designated as art side by side with objects designated as artefacts, thereby questioning the values we assign to these categories and the places and people that create them.

Here is the first in a series of posts on the current Natural Histories exhibition, written by Nicole Smythe-Johnson. We welcome your comments on this post, the exhibition and our current direction at the NGJ.

Carl Linnaeus (1707–1778) was a Swedish botanist, physician, and zoologist, who laid the foundations for the scheme of binomial nomenclature (scientific names of plants and animals) that is still used today. He is known as the father of modern taxonomy (or classification), and is also considered one of the fathers of modern ecology. He is less well known as the first to articulate a scientific theory of race, a development that contributed significantly to justifications of the colonial project and is at the foundation of eugenics, the pseudo-science of race that reached its height in the early 20th century.

In his seminal book Systema Naturae, Linnaeus subdivided the human species into four varieties based on continent and skin colour: “Europæus albus” (white European), “Americanus rubescens” (red American), “Asiaticus fuscus” (brown Asian) and “Africanus niger” (black African). In the tenth edition of Systema Naturae he further detailed stereotypical characteristics for each variety, drawing on the concept of ”the four temperaments” from classical antiquity, and changed the description of Asians’ skin tone to “luridus” (yellow). Additionally, Linnaeus created a fifth category “monstrosus” for “wild and monstrous humans, unknown groups, and more or less abnormal people”. These are the links between nature and race that works by artists like Hope Brooks and Shoshannah Weinberger illustrate and challenge. Linnaeus did not merely classify people, he assigned particular traits to the races. Of course, this assignment of characteristics was heavily biased toward Europeans, positioning that race as the civilized pinnacle of man’s evolution. 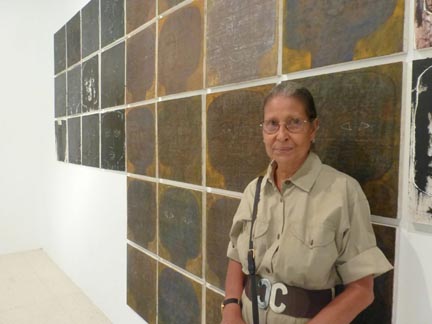 Hope Brooks in front of her Slavery Trilogy triptych, April 28, 2013