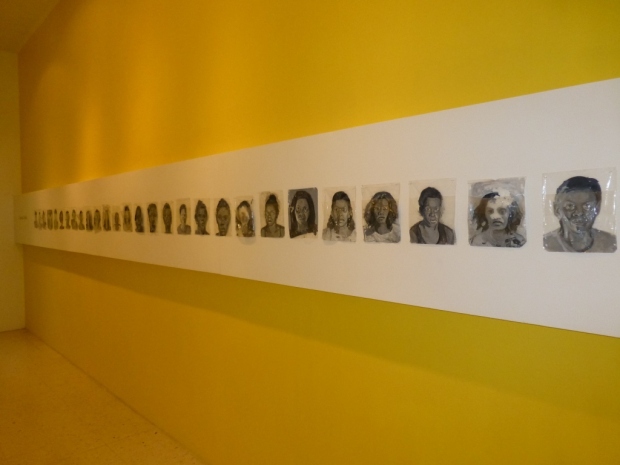 Here is another in the series of reviews that were produced as part of the NGJ’s recent art writing workshop for its curatorial staff. This comparison between the self-portraits of Henry Daley from our permanent collection and Camille Chedda’s self-portraits in New Roots was written by Monique Barnett-Davidson. Monique is a Painting graduate of the Edna Manley College and is one of our two Curatorial Assistants.

As an art enthusiast, I always enjoy tracking how artists over time have extended long-referenced concepts and subject matters to discuss and explore aspects of culture and social life. As I explored the recently installed contemporary exhibition, New Roots: 10 Emerging Artists, at the NGJ, I was excited to identify parallels between that and works from the NGJ’s permanent display of older modern pieces.

Take self-portraiture for example. In Jamaican art, approaches to self-portraiture have been largely conventional. There are, however, some Jamaican artists who are exceptional and whose approaches to self-portraiture may be more aligned to figures like Van Gogh and Frida Kahlo. These artists – by consistently referencing themselves in their artistic output – set new standards of openness that move beyond the older heroic depiction of the artist, to the artist as a vulnerable, fallible and questionable human being.

Recently, two Jamaican examples of this approach to self-portraiture have stood out for me. One work is entitled (and aptly named) The Artist (c. 1943), done by early twentieth century painter Henry Daley. The other, entitled Built-In Obsolescence (2010-2011) is executed by young contemporary artist, Camille Chedda. These two works illustrated not only a common interest in subject matter shared by these artists, but offered me a fascinating parallel between two different time periods and generations within Jamaican art and cultural history.