Henri Tauliaut is another of the artists in the Digital exhibition, which is on view until July 4, 2016:

Henri Tauliaut was born in Guadeloupe in 1966. He defines himself as a digital and a “bio-artist.” He has been educated at a number of regional and international institutions, including the Mains d’Oeuvre in Saint Ouen, France, where he trained in interactive art (2015). From 2012 to 2016, he attended the Doctoral School of the Université Antilles Guyane (University of the French West Indies and Guiana). He was featured in the 12th Havana Biennial in Cuba in 2015. Tauliaut currently works and lives in Martinique. 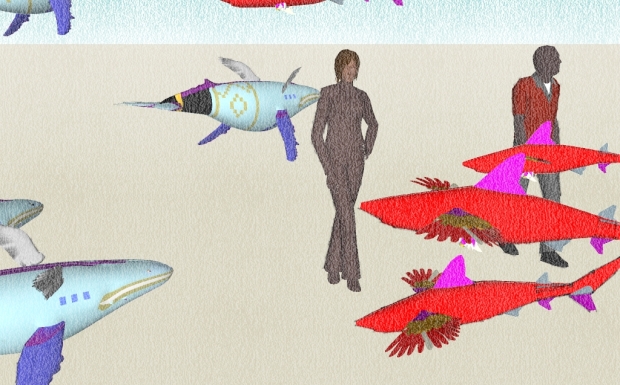 “For fifteen years I have been developing an approach around the thematic of living things and artificial ones. The common denominator of my projects is the link that they draw between art and science. Additionally, they all address the question of Life, its complexity, its beauty, its extraordinary profusion and banality. … While these projects have some autonomy between them, they contribute to each other to produce new works; this is what I call ‘Visual translations.’”

“My projects are primarily aimed at introducing new items into my art: my research around the Organic Project incorporated ‘living items’ as artistic materials. Also, I infused my work on courtship rituals with the strategies and behavior of seduction. In my other work, D.E.V.A.H., where I question Life, I introduced elements necessary for the development of life. In the framework of this project, I realized a laboratory where plants thrive to develop in extreme conditions in order to create unique vegetal species in the world: The Cultivarts.”