The closing event for the National Gallery of Jamaica’s Digital exhibition will be a panel discussion and Twitter chat on the possibilities and potential of digital art and its role in redefining contemporary art. This panel discussion will be held at the National Gallery on Saturday, July 2, 2016, starting at 1 pm and will feature four digital artists, Corretta Singer, David Gumbs, Shane McHugh and Danielle Russell. The latter three are are represented in the Digital exhibition.

The panel discussion will be organized around four major discussion points:

The panel discussion will be accompanied by a Twitter chat for members of the audience and persons who are not able to come to the gallery for the event, including some of the artists in the Digital exhibition. All that is required is that they follow the National Gallery of Jamaica’s Twitter account, @natgalleryja and include #NGJDigital in their comments or questions. Participants in the Twitter chat can begin tweeting by 12 noon on the day.

The panel discussion is free and open to the public. Persons in attendance will also have a final opportunity to view the Digital exhibition. 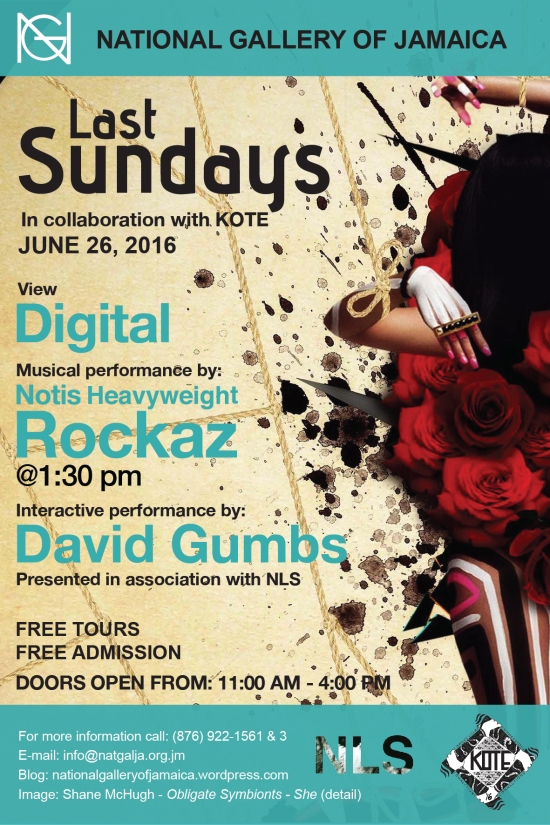 The National Gallery of Jamaica is presenting a special edition of its Last Sundays on June 26, 2016, on the occasion of the 2016 Kingston on the Edge (KOTE) urban arts festival. The programme features music by Notis Heavyweight Rockaz and, in collaboration with New Local Space (NLS), there will be an interactive video performance by the Martinique-based artist David Gumbs. There will also be opportunity to tour the current exhibition, Digital, and to view the permanent exhibitions.

END_OF_DOCUMENT_TOKEN_TO_BE_REPLACED

The National Gallery of Jamaica celebrates Child’s Month with special programming for its Last Sundays programme for the month of May.  The programme will feature a musical performance by Stephanie, which will appeal to all audiences, and, for the younger patrons, special readings by three children’s book authors: Tanya Batson-Savage, A-dZiko Simba Gegele and Kellie Magnus. The current exhibition Digital will also be featured.

Stephanie Wallace-Maxwell, known professionally as Stephanie, is a singer and songwriter, whose sound is a fusion of R&B, Reggae, Soul, Dancehall, and Pop; having grown up on a rich variety of music. Stephanie has toured internationally as both lead and backing vocalist with the band Groundation and has also worked with the legendary producers Sly and Robbie for Sony Music Japan, as a member of the group UNITZz, which has had two tremendously successful albums, J Paradise and J Lovers. Stephanie’s musical journey continues to blossom into the realization of a dream that has stuck with her since conception: to make an indelible mark on the world.

END_OF_DOCUMENT_TOKEN_TO_BE_REPLACED

While we wait for the production of a longer video on the Digital exhibition, we are pleased to present this teaser video with interviews with three of the artists in the exhibition.

This is the last of our features on the artists in Digital. Look out for other posts on this groundbreaking exhibition.

Ronald Williams was born in Barbados, in 1990. He attended the Barbados Community College where he attained a BFA degree in 2013. Williams has had a number exhibitions, both in Barbados and internationally. His most recent include Finite Project Altered When Open (2015) at the David Dale Gallery in Glasgow Scotland, and 300 dpi (2015) at the ArtSplash Gallery in Barbados.

This series explores the role that sports and the black athlete/figure play in society; placing an emphasis on the perceptions and stereotypes about the black image. Using the technique of digital collage, a wide variety of popular based images is manipulated and compiled together to make the artwork, which takes the form of a sportsperson.