The National Gallery of Jamaica’s Last Sundays programme for the month of November will feature a musical performance by Alex Gallimore, more popularly known as Alexx A-Game. November 26 will also be the last opportunity to see the Annabella and Peter Proudlock Collection and the We Have Met Before exhibitions, which had both been extended.

Alexx A-Game’s career as a musician began as the lead singer of Di Blueprint Band, which became popular in 2012 after winning the Global Battle of the Bands competition in London. They went on to appear at major music festivals in Jamaica and toured the United States, the Caribbean, Suriname and Europe. Alexx began his solo career a few years afterwards and released his first official single, the motivational anthem A-Game Everyday. His mixed tape of the same name soon followed, and more recently he released the 10-track Real ‘N’ True Vol. 1. With his lyrical prowess, catchy hooks and witty freestyles, Alexx A-Game is making a significant mark on Jamaican music while opening up a door to international urban music. His music is inspired by Jamaican legends such as Damian Marley and Shabba Ranks as well as US and UK Hip-Hop culture.

The Annabella and Peter Proudlock Collection chronicles the contributions made to the Jamaican artistic community by the principals of the north coast based Harmony Hall Gallery, while displaying their personal art collection gathered over nearly fifty years. We Have Met Before, which is presented in collaboration with the British Council, features the work of Graham Fagen (Scotland), Joscelyn Gardner (Barbados/Canada), Ingrid Pollard (Guyana/ UK) and Leasho Johnson (Jamaica). The work of each of these artists creates contemporary platforms for engaging with the difficult conversations that still surround the histories and legacies of the transatlantic slave trade.

As is now customary for our Sunday programmes, the doors will be open to the public from 11 am to 4 pm and Alexx A-Game’s performance starts at 1:30 pm. Admission and guided tours will be free. The gift and coffee shop will also be open for business and the gift shop features Jamaican craft and other gift items that make wonderful Christmas gifts.

The National Gallery of Jamaica is pleased to announce that due to popular demand we are extending the Annabella and Peter Proudlock Collection and We Have Met Before  exhibitions to November 26, 2017.

There will exceptionally be no Last Sundays programme for the month of October 2017, but the National Gallery of Jamaica will present a special “First Sundays” programme on November 5 instead. The programme on November 5 will feature a musical performance by Jamila Falak and visitors will also have a final chance to view the Annabella and Peter Proudlock Collection and We Have Met Before exhibitions, which are both being extended by one day for this special event. The November 5 programme is part sponsored by CB Foods.

We Have Met Before is presented in partnership with the British Council and features works by artists Graham Fagen (Scotland), Joscelyn Gardner (Barbados/ Canada), Leasho Johnson (Jamaica) and Ingrid Pollard (Guyana/ UK). The exhibition offers four distinct and contemporary perspectives on Plantation Slavery and its afterlives and the works invite the public to engage in the still pertinent and difficult conversations surrounding the subject.

The Annabella and Peter Proudlock Collection features selections from the personal collection of Annabella and Peter Proudlock, who operated the celebrated Harmony Hall Gallery. Their collection spanned some fifty years, from the 1960s to the early 2010s, mainly featuring Jamaican artists, but also art and craft collected in their wide ranging travels around the Caribbean and Central America. The exhibition documents the history of the Harmony Hall Gallery which held a unique position in the development and promotion of the arts in post –independence Jamaica.

As is now customary for our Sunday programmes, the doors will be open to the public from 11 am to 4 pm and Jamila Falak’s performance starts at 1:30 pm. Admission and guided tours will be free. Complimentary refreshments will be offered, courtesy of CB Foods. The gift and coffee shop will also be open for business.

The National Gallery of Jamaica’s Last Sundays programme for September 24, 2017 will feature the Quilt Performing Arts Company. Visitors will also be able to view the We Have Met Before and the Annabella and Peter Proudlock Collection exhibitions.

The Quilt Performing Arts Company was born out of a need for a fresh, new, innovative way of creating performance art. Using Caribbean rhythms, merging poetry, music and dance, the Quilt performers have developed their own unique performance style and an evolving theatre technique. Artistic director Rayon Mclean and his team continue break boundaries and redefine performance spaces, and this time the women in the company will be quilting from their heART through music, poetry and dance. The show is called #POW- Patches of Women. This is Quilt’s third time at the National Gallery. END_OF_DOCUMENT_TOKEN_TO_BE_REPLACED

The National Gallery of Jamaica’s Last Sundays programme for August 27, 2017, will feature the Annabella and Peter Proudlock Collection exhibition as well as a musical performance by Janine Jkuhl.

The Annabella and Peter Proudlock Collection exhibition features selections from the collection of Annabella and Peter Proudlock, who were the principals of Harmony Hall gallery in Tower Isle, St Mary. It documents some fifty years of collecting, mostly of Jamaican art but also of art and craft from elsewhere in the Caribbean and Central America. The exhibition tells the story of Harmony Hall, which holds a unique position in the history of Jamaica’s commercial galleries as it has served the local and tourist markets, and focuses on its role in the promotion of Intuitive art. And it also tells the story of a particular group of people who made their lives in post-Independence Jamaica and who were deeply immersed in the cultural and artistic developments of that moment, to which they actively contributed.

Janine Coombs, also known as Jkuhl (pronounced Jay-Cool), is an eclectic singer-songwriter and also an eclectic listener who is influenced by many genres of music. She describes herself as “a beatific musician, songwriter and singer of Classical and IndiePop.” A graduate of the Edna Manley College of the Visual and Performing Arts, Janine Jkuhl recorded her first Album, STAR GAZE, in the summer of 2009. This album consists of ten inspirational Indie-Alternative-Fusion tracks, to inspire, heal and soothe the mind and soul of listeners. Since then, Janine has written numerous songs showcasing her developing style which she calls “Jkuhl.” She has been featured in RJR 94 FM’s Music Week Acoustiks Live Concert, the Gungo Walk Alternative Music and Art festival, the French Embassy’s Fete De La Musique, the JARIA Reggae Month Show, and the MUZAK Heart and Soul Noise Talent Show at the California State University, just to name a few. She has also been a guest soloist for the Diocesan Festival Choir of Jamaica Concert Series as well as the National Choral of Jamaica’s Elijah Tour. Her single Tempted was rated in the top ten songs of May 2016 on the USA Indie radio show, The John Wayne Show, Maven FM.

Visitors will also be able to view two other temporary exhibitions consisting of selections from the National Collection: New Dialogues and Art of Independence. Doors will be open to the public from 11:00 am to 4:00 pm; the musical programme will start at 1:30 pm. As is customary, admission will be free, along with free guided tours of the exhibitions. Our Gift and Coffee Shops will also be open for business. Proceeds from these as well as contributions to the National Gallery’s donation box are, as always, appreciated and are used to help fund programmes like Last Sundays as well as our exhibitions . 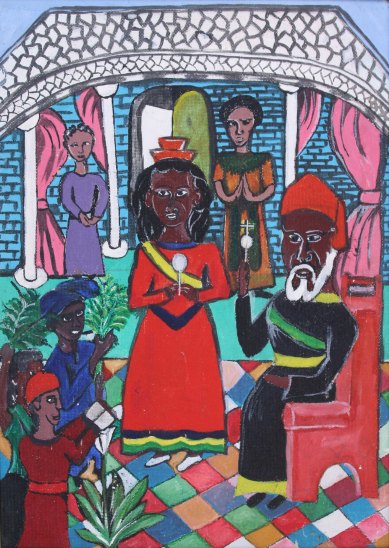 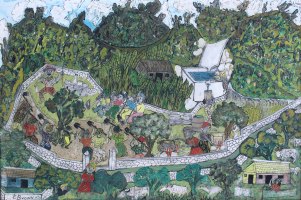 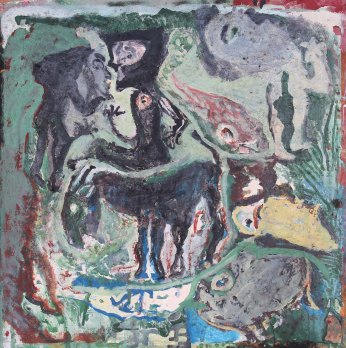 This is, for now, our final post on the Annabella and Peter Proudlock Collection exhibition, which continues until November 4.

Jamaica has a long and rich history of popular and self-taught art but this has not always been fully valued and documented. There have however been several major efforts over the years to recognize the artistic mastery and significance of artists who have come out of this sphere. This started with the recognition of John Dunkley and David Miller Senior and Junior by the nationalist intelligentsia in the 1930s and 40s. In the 1960s, as Mallica “Kapo” Reynolds—a Revivalist bishop — received significant support from the young politician Edward Seaga and Jamaica’s first Director of Tourism, John Pringle. Kapo’s personality and work were, for instance, used in the Tourist Board Board advertising, as part of a campaign to convey that Jamaica was more than just a beach but had a rich and distinctive culture – a campaign which paved the way for later cultural tourism initiatives such as Harmony Hall. The emergence of the Rastafari movement in the 1960s also helped to validate and give visibility to popular cultural production.

The defining moment of what is now labelled as Intuitive art came with the National Gallery of Jamaica’s ground-breaking Intuitive Eye exhibition in 1979,which featured the work of a wide range of self-taught, popular artists such as Dunkley, the Millers and Kapo, as well as several newer exponents.  This exhibition was curated by David Boxer, the National Gallery’s Director/Curator at that time, who coined the term “Intuitive,” as an alternative to derogatory terms such as “primitive” and “naïve.” While the National Gallery’s promotion of the Intuitives was not uncontroversial, it was supported by a passionate group of collectors and enthusiasts. This included Annabella Proudlock, who had been friendly with artists such as Kapo since the 1970s, and Harmony Hall, which opened in 1981, quickly became the main private counterpart of the National Gallery in the promotion of the Intuitives.

This gallery highlights works by Mallica “Kapo” Reynolds, Albert Artwell, Allan “Zion” Johnson and Birth “Ras Dizzy” Livingston – all major exponents of Intuitive art. It includes early works by these artists that were acquired before Harmony Hall was established and owned by Annabella, which also illustrates that there was a longer history of association which paved the way for what was later achieved at Harmony Hall.