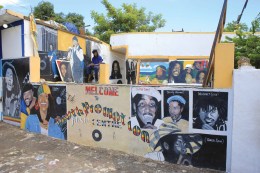 Here is another feature on the themes that structure the Kingston – Part 1: The City and Art exhibition, written by the exhibition curator, Monique Barnett-Davidson:

A simple bus commute or walking tour of the city can bring one into an even more direct engagement with Kingston’s artistic heritage. Street and public art proliferate in the city, whether as officially commissioned statues, monuments and murals, or more informal expressions on community walls, vehicles or vending stalls. These works are experienced on a daily basis by the people who use, traverse, relax or congregate around these spaces and often command their surroundings as iconic landmarks.

As Jamaica’s capital, Kingston is home to a number of public monuments. Their narratives reflect memories of historic triumph, expressions of hope in the face of adversity, or simply reflection in the wake of tragedy; exemplified by Edna Manley’s Negro Aroused sculpture, the monuments of the National Heroes Park, and the Secret Gardens monument, which are all located in Downtown Kingston. Secret Gardens was commissioned by the Kingston and St Andrew Corporation, the local government authority, to commemorate children who die under tragic or violent circumstances and the local media recently reported that no more space was left to add further names—a very sad reflection of the vulnerability of children in Jamaican society.

END_OF_DOCUMENT_TOKEN_TO_BE_REPLACED

UPDATE: PLEASE NOTE THAT THE SUBMISSION AND OPENING DATES FOR THE JAMAICA BIENNIAL HAVE CHANGED. PLEASE CLICK THIS LINK FOR THE CURRENT INFORMATION.

The National Gallery of Jamaica will be celebrating its fortieth anniversary later this year, on November 14, 2014 to be precise. This anniversary provides us with an opportunity to celebrate, to reflect and to plot our course going forward. Here is a preview of what we have in store for you, written by Chief Curator Charles Campbell.

2014 is shaping up to be a big year for the National Gallery of Jamaica. It’s been forty years since we first opened our doors as a gallery to collect, research, document and preserve Jamaican and other Caribbean Art. As I begin to settle into my role here as the new Chief Curator this year’s milestone has been an opportunity to look at both the Gallery’s tremendous accomplishments and how we may wish to change.

To celebrate our fortieth anniversary we’ll be mounting an exhibition that looks at the gallery’s history and the role it’s played in the Jamaican art world. In Retrospect: 40 years of the National Gallery of Jamaica will examine how the Gallery has told our story and influenced how we understand art in Jamaica. We’ll be looking at everything from the crafting of the national narrative to controversies surrounding the development of the Intuitive canon to the role the gallery has played in cultivating young artists and notions of the avant garde. The exhibition opens on July 27 and will offer an interesting dialogue between some of Jamaica’s most senior artists and young contemporaries.

Before we get there though the gallery will be breaking new ground with our two exhibitions opening in May, Japan: Kingdom of Characters and Anything With Nothing: Art from the Streets of Urban Jamaica. Kingdom of Characters, which opens on May 11, comes to us via the Japanese Embassy and showcases Japanese character culture and the development of Anime and Manga characters through visual images, video and life-size models. The show is already generating significant interest from young artists and animators, and in a departure from our usual events we’ll be hosting a cosplaying party as part the programming for the exhibition.