While preparing for our next major exhibition, the Barrington Watson Retrospective which is scheduled to open on January 8, 2012, the National Gallery is pleased to present the following temporary displays:

Selections from the Permanent Collection: On view in the central lobby, mezzanine and circulating areas of the National Gallery are selections from our permanent collection, with works of art in various media from the 1960s to the present, by major Jamaican artists such as Carl Abrahams, Ebony Patterson, Cecil Baugh, Renee Cox, Ralph Campbell, Bryan McFarlane, Kapo, Osmond Watson, Milton George, Everald Brown, Albert Artwell, Hope Brooks, Norma Rodney Harrack, Gloria Escoffery, Peter Wayne Lewis, Karl Parboosingh, and Eugene Hyde. This temporary exhibition includes selections from our ceramics collection, our contemporary art and Intuitive holdings, the Eugene Hyde prints in our collection, Milton George’s Pages from my Diary, as well as a thematic display on religion in Jamaican art. Not to be missed, this exhibition includes several less known but important works from our collection that are not normally on long term public view.

END_OF_DOCUMENT_TOKEN_TO_BE_REPLACED

Isaac Mendes Belisario was the first documented Jamaican-born artist. He was active in Kingston around Emancipation and his work, in paint and in print, provides a rich document of life in Jamaica, seen from the perspective of the Sephardic merchant class to which he belonged. Belisario’s work is well represented in the NGJ Collection and on permanent view in our historical galleries. The following overview of his life and work is adapted from the catalogue of “Isaac Mendes Belisario: Art & Emancipation in Jamaica” (2008).

Isaac Mendes Belisario was born in Kingston, Jamaica, in 1795 into a Sephardic Jewish family of Spanish or Portuguese origin. The family had close ties to the Sephardic community in London. His grandfather, Isaac Mendes Belisario, after whom he was named, taught children at the Bevis Marks synagogue in London. The older Isaac’s son Abraham was sent to Jamaica in 1786 to work for Alexandre Lindo, a wealthy merchant, plantation owner, and slave factor. Five years later Abraham married Alexandre’s daughter Esther, and in 1803 Abraham, Esther and their six children – the younger Isaac, Caroline, Lydia, Hannah, Rose and Maria – moved to London.

Belisario trained as an artist under Robert Hills, the landscape watercolourist and drawing master. He exhibited landscapes between 1815 and 1818 but put aside his artistic endeavours in the 1820s, when he worked as a stockbroker. In 1831 Belisario showed a portrait at the Royal Academy of Arts, London.

Belisario returned to Kingston in about 1832 and remained there for at least fifteen years.  The island had a significant Jewish population in the 1830s, concentrated in Kingston and Spanish Town, and the majority worked in retailing, merchandising, and wholesaling. Belisario may have felt encouraged to return by the Jamaica Assembly’s passing in 1831 of the Jewish Emancipation Act, which gave Jamaican Jews full civil liberties at a time when the rights of Jews in Britain were still being negotiated.

The few works that survive from this period in Belisario’s career show him to have been a versatile artist, capable of working in different media and in a range of genres to cater to his clientele’s demands. In addition to his portrait practice, which was based oat 21 King Street, in downtown Kingston, Belisario painted estate portraits in oils and collaborated with the French printmaker Adolphe Duperly on various print projects. In 1837-1838 Belisario produced his best-known work, Sketches of Character, a series of twelve handcoloured lithographs, which may reflect his desire to produce work of wider appeal and more lasting significance.

The Jamaica to which Belisario returned was on the eve of making its troubled transition from apprenticeship to full emancipation, and his works provide a fascinating portrait of a colony undergoing – and resisting – radical transformation. He did not publicize his personal views, however, perhaps out of concern not to alienate his clients and community.

Belisario’s last documented Kingston work is a lithograph of 1846, and he died in London in 1849. END_OF_DOCUMENT_TOKEN_TO_BE_REPLACED

Inside the NGJ entrance lobby

We could not let the year come to a close without acknowledging that 2009 marks the 35th anniversary of the NGJ. This post is based on a press release we have sent out to mark the occasion and provides an overview of the NGJ’s key achievements and activities.

The National Gallery of Jamaica was established in 1974, as the first national art gallery in the Anglophone Caribbean. National galleries have since been established in Guyana, the Bahamas, Bermuda, the Cayman Islands and soon also in Barbados but within the Caribbean region, the National Gallery of Jamaica is second only to the art museums of Cuba, Puerto Rico and the Dominican Republic in terms of the size of its facilities and collection and the scope of its operations.

END_OF_DOCUMENT_TOKEN_TO_BE_REPLACED

This week, we celebrate the earliest beginnings of art in Jamaica, the art of the Jamaican Taíno, and the earliest works in the NGJ’s permanent collection, four very rare Taíno woodcarvings. The introductory text below was prepared by the NGJ’s Education Department.

The Jamaican Taíno shared much of the culture of the so called Classic Taíno of Hispaniola, having originated from the same roots in South America.

It is believed that at the time of Columbus arrival here there were dozens of large Taíno settlements, some with hundreds of multifamily huts. Estimates of their number range from sixty thousand to six hundred thousand. Each village was controlled by a Cacique. It appears that there was a principal Cacique or “Cacique of the Caciques” for the entire island.

The Taíno were an agricultural people. They also hunted iguanas and coneys, fished and reaped shell food. But central to their way of life was the growing of cassava, their staple food. Highly important were the rituals associated with the growing and preparing of cassava (yucca), which involved the expelling of poisonous juices. In fact, the name Yucahu, given to their supreme Deity, translates as “spirit of cassava.”  In general they worshiped a wide range of sub-deities in the form of idols or zemis, who controlled all aspects of their lives and supervised the land of the dead, but they were in effect monotheistic as they believed in a single Supreme Deity, Yucahu.

END_OF_DOCUMENT_TOKEN_TO_BE_REPLACED 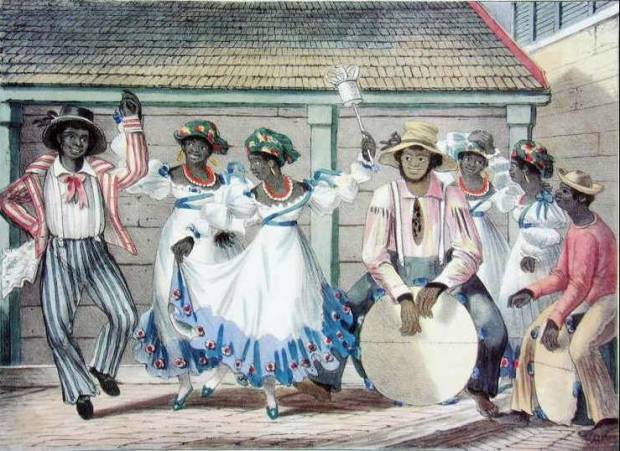 In 2008, the NGJ started reorganizing and re-installing its permanent exhibitions, which are now all located on the second floor of the building, while the first floor is reserved for temporary exhibitions. The re-installation reflects new exhibition practices in art galleries and museums and is designed to be more engaging and visitor-friendly. Among others, we are providing more contextual information by means of text panels and we are also challenging some of the common views about Jamaican art, culture and history, by means of provocative juxtapositions.