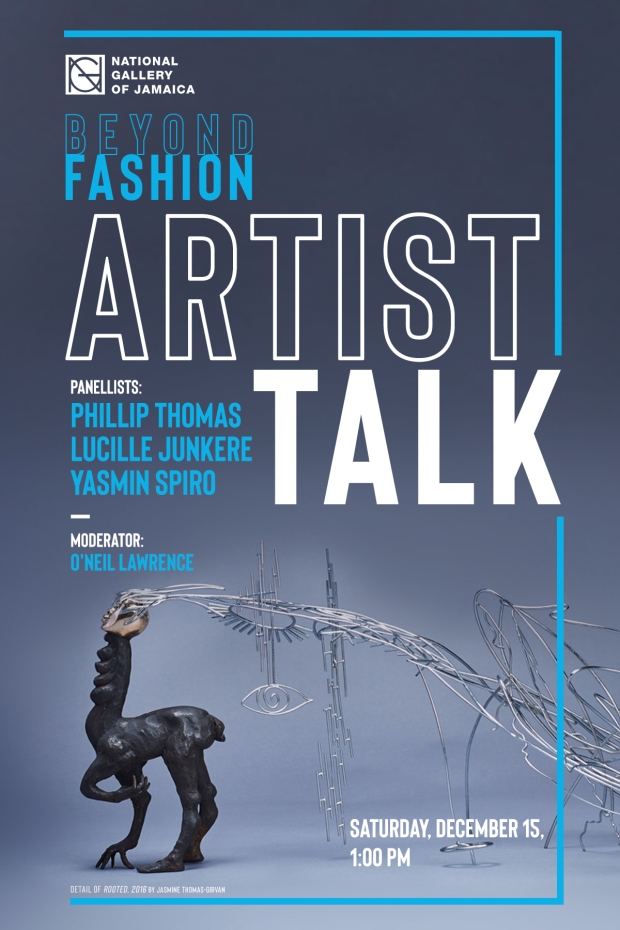 The National Gallery of Jamaica is pleased to present the first of two Artist Talks for its current exhibition Beyond Fashion on Saturday, December 15 starting at 1:00 pm. Beyond Fashion seeks to explore the capacity for fashion themed or influenced art making to reflect and interrogate complex personal and societal histories. The exhibition also questions the supposed distinctions between art and craft. These concepts will be explored in the context of this exhibition during this session.

The discussion will be moderated by the exhibition’s lead curator O’Neil Lawrence and the panelist will include exhibiting artists Phillip Thomas, Yasmin Spiro as well as researcher, indigo dyer and artist Lucille Junkere. The panel discussion is free and open to the public. Persons in attendance will also have an opportunity to view the Beyond Fashion exhibition which will close on January 15, 2019. 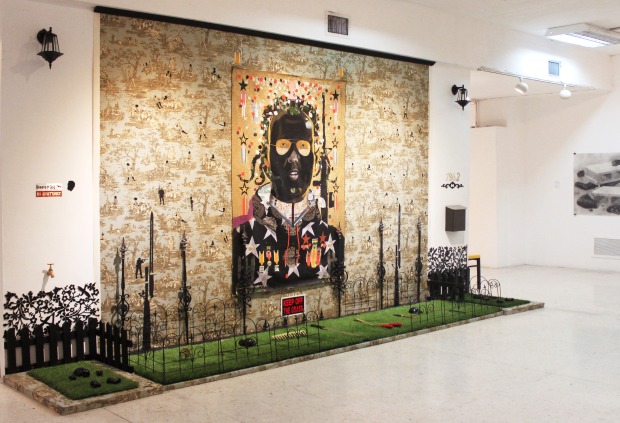 Phillip Thomas – High-Sis in the Garden of Heathen (2017)

Here is another feature from our Jamaica Biennial 2017 archives:

Phillip Thomas was born in 1980, in Kingston, Jamaica. Thomas received his BFA in Painting in 2003 from the Edna Manley College of the Visual and Performing Arts and received the Albert Huie award for Painting at the end of his studies there. He later earned his MFA at the New York Academy of Art. Phillip Thomas has exhibited extensively locally and internationally and is represented in major collections. His awards include the Bronze Musgrave Medal for excellence in art in 2014, the Public Prize in the 2006 SuperPlus Under 40 Artist of the Year competition and the Aaron Matalon Award in the 2008 National Biennial. In his oil paintings and mixed-media works, artist Phillip Thomas combines the imagery and traditions of the Old Masters with contemporary textures and patterns to create a new iconography. As he puts it, “You want a way to lure people into the image, and then it unfolds itself, like a very slow car crash. I try in many ways to present the audience to themselves.” Thomas lives in Kingston, Jamaica. 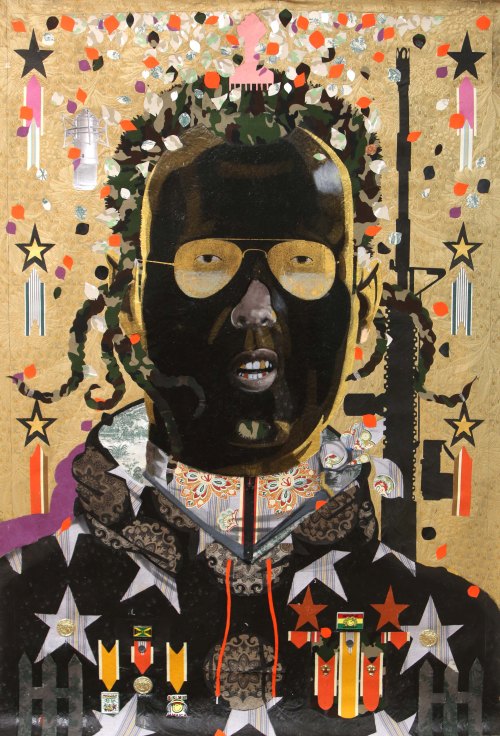 Phillip Thomas – High-Sis in the Garden of Heathen (2017, detail of work in progress) 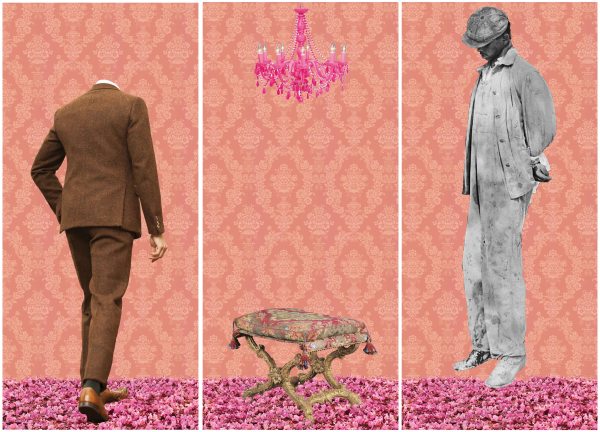 Phillip Thomas is represented in the Digital exhibition, which opened on Sunday, April 24:

Phillip Thomas was born in Kingston, Jamaica, in 1980. He received a BFA in Painting from the Edna Manley College of the Visual and Performing Arts (2003) and an MFA from the New York Academy of Art. Thomas has exhibited widely in Jamaica and abroad, and his awards include the Bronze Musgrave Medal in 2014, the Aaron Matalon Award in the NGJ’s 2008 NationalBiennial, and the Public Prize in the 2006 SuperPlus Under 40 Artist of the Year competition. He represented in local and international collections, including at Sotheby’s and the World Bank. He currently lives and works in Kingston, Jamaica where he lectures at the Edna Manley College. 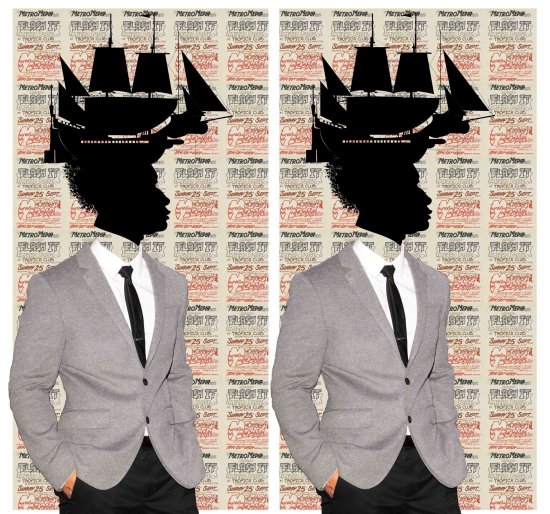 Phillip Thomas’ paintings rely heavily on appropriated images, taken from the worlds of fashion,interior design, historical and documentary photographs and many other sources, and often include collaged elements. The resulting images reflect with ironic sophistication on history, race and sexuality and raise questions about the social roles of art, particularly the tension between its status as a luxury commodity and its potential for politically potent and subversive visual interventions. Thomas has for many years been using digital media to produce the studies for his paintings but these digital studies often take on lives of their own as image meditations that reflect more directly on the politics of representation. Printed on PVC, on a scale comparable to his paintings, the digital images in this exhibition simultaneously challenge and reinscribe the luxury commodity value conventionally associated with his art. 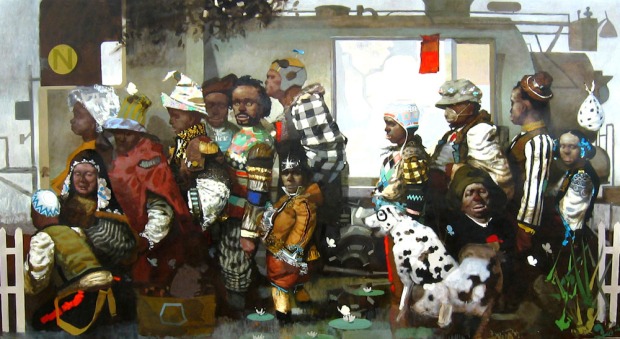 On October 22, three Jamaican artists were awarded Musgrave Medals by the Institute of Jamaica: Petrona Morrison (Gold), Jasmine Thomas-Girvan (Silver) and Phillip Thomas (Bronze). The NGJ congratulates them and, as has become customary, is publishing the citations on its blog, starting with Phillip Thomas:

“The Institute of Jamaica recognizes Mr Phillip Thomas for merit in the field of Art.”

“Phillip Thomas currently teaches painting at the Edna Manley College’s School of Art, his alma mater, where he attained a Bachelor’s of Fine Arts in Painting and in the process earned the coveted Albert Huie Prize for painting. He also earned a Masters of Fine Arts in Painting from the New York Academy of Art, where he was awarded a one year post graduate fellowship. He has recently completed a residency at The Prince’s Drawing School Dimplex Studio at Dumfries House in Scotland.”

“Thomas has exhibited widely in Jamaica and internationally. He won the Public Award in the Mutual Gallery’s Under-40 Artist of the Year competition in 2008 and he is a regular exhibitor at the National Gallery of Jamaica, where he was awarded the prestigious Aaron Matalon Award for his submission to the 2008 Biennial. He is represented internationally by the Richard J. Demato Gallery in Sag Harbor, New York.”

END_OF_DOCUMENT_TOKEN_TO_BE_REPLACED

Phillip Mark Anthony Thomas was born in Kingston Jamaica on February 20, 1980. He received his BFA in 2003 at the Edna Manley College of the Visual and Performing Arts. At this institution he received the Albert Huie Award for Painting at the end of his four-year study. He subsequently received an MFA from the New York Academy of Art. He received two educational scholarships in support of his MFA: a CHASE fund grant and a grant from the Cobb Family Foundation. Phillip is currently completing a  postgraduate Fellowship.

Phillip Thomas has been involved in several group shows such as the Super Plus Under 40 Artist of the Year exhibition and competition, where he received the Public’s award, and the 2008 Jamaica National Biennial, at the NGJ, where he was awarded the Aaron Matalon award. END_OF_DOCUMENT_TOKEN_TO_BE_REPLACED