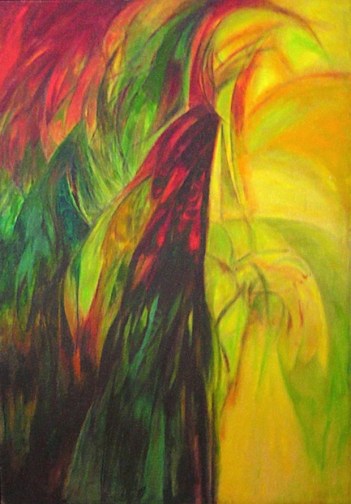 Croton Series (1964) is a part of Eugene Hyde‘s flower series. For most of his career, Hyde’s stylistic approach was adventurous and foreign to Jamaican audiences who were unfamiliar with abstraction and more inclined towards classical realist art. He is considered a major force in the development of abstract art in Jamaica and saw himself as something of an outsider to the local art scene. In the mid-1960’s, Hyde’s work began to reflect a strong Abstract Expressionist influence, the Croton Series exemplifies this moment.

Abstract Expressionism is an art movement that gained prominence in post-World War II America (mid to late 1940s). The movement is characterised by a combination of the emotional intensity and self-denial of the German Expressionists with the anti-figurative aesthetic of earlier abstract movements such as Futurism and the Bauhaus. Elements of abstract expressionism such as  dynamism and movement in form, shape and space characterize Croton Series and other such works by Hyde. The works use of sweeping movements of gradating colours to imply form is also typically Abstract Expressionist. Though Hyde was interested in abstraction, his work never became strictly formalist as was the tendency with European and American abstract movements. He re-interpreted abstraction to suit the Jamaican context, always maintaining a representational element in his compositions.

For some time now, the NGJ has been refurbishing and reinstalling its permanent collections and in 2010 we started work on the modern Jamaican section, “Jamaican Art: the 20th Century”. We have now continued this process and incorporated into this section a gallery with selections from the A.D. Scott Collection, a major group of donations to the NGJ that provide a vivid picture of Jamaican art in the post-Independence decades. Scott was very actively involved in the art of that period, by means of the Contemporary Jamaican Artists’ Association, which he chaired for many, his friendships with Barrington Watson, Eugene Hyde and Karl Parbooshingh, and the 1974 establishment of the Olympia International Art Centre. With the Barrington Watson retrospective currently on view, until April 14, and the Jamaica 50 observations in progress, we could not think of a better moment to open this new section of our permanent exhibitions. Here is more about A.D. Scott and the A.D. Scott Collection:

A.D. Scott, or ‘Scotty” as he was affectionately referred to by those familiar with him, was born in Kingston, Jamaica on January 27, 1912. A.D. Scott was among the first to attend the Kingston College which was established in 1925.

Later, he studied at the McGill University in Montreal, Canada, gaining a Bachelors Degree in Civil Engineering. Whilst in Canada, he further developed his skills as a highly competent engineer, securing key positions including Senior Assistant Engineer in the Royal Canadian Air Force and engineer-in-charge of Aerodrome Construction for the Canadian Government. Upon his return to Jamaica in 1945, he was appointed engineer-in-charge of construction for the University College of the West Indies. His later contributions to national infrastructural development would include the construction of the U.W.I Chapel, the National Stadium and the Hope Reservoir, earning him the title of Jamaican Master Builder.

END_OF_DOCUMENT_TOKEN_TO_BE_REPLACED

This second in a two-part feature on Eugene Hyde was researched and compiled by Monique Barnett, Curatorial Assistant. 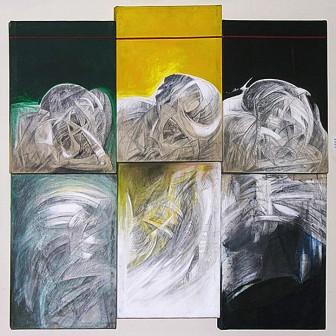 Eugene Hyde’s artistic oeuvre includes drawings and etchings on paper, mix media paintings on canvas as well as explorations in architectural ceramics. Hyde also executed commissions for large murals, for example a stone mural for University of the West Indies Extramural Campus on South Camp Road. He was also commissioned to do a stage backdrop for Dialogue for Three, a dance piece choreographed by the late Professor Rex Nettleford for the National Dance Theatre Company during the mid-1960. Today, he is considered one of Jamaica’s great muralists. “Hyde brought a new aesthetic to Jamaica…together with Barrington Watson, he introduced a new sense of scale [and] a more “expansive” imagery.” (Smith-McCrea, 1984, 10) 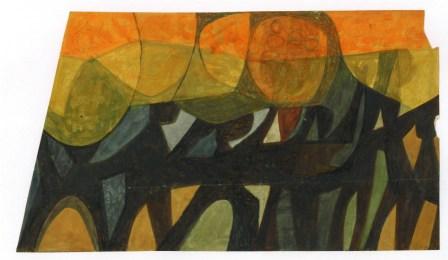 END_OF_DOCUMENT_TOKEN_TO_BE_REPLACED

This first in a two-part feature on Eugene Hyde was researched and compiled by Monique Barnett, Curatorial Assistant.

Rex Nettleford in discussion with Jamaican painter Eugene Hyde, who was working on his 1966 exhibition The Dance (photographer unknown)

One of the most ambitious developments to take place within the realm of the
Jamaican art movement was the formation of the Contemporary Jamaica Artists’ Association (CJAA) in 1963. It emerged at a time when Jamaica had already established several galleries, a tertiary institution of art (the Jamaica School of Art), and a viewing public along with competent critics – all indicators of the professionalization of Jamaican art at that time. This association of professional artists was geared towards building “respectability for the profession as well as [making] art a financially viable concern and [elevating] it to a standard comparable with other movements abroad” (Archer-Straw & Robinson 1990, 57). The founders of the Association, Karl Parboosingh, Eugene Hyde and Barrington Watson, all shared strong commitment to the adoption of modern approaches to art in Jamaica. Hyde in particular was responsible for introducing a number of international artists to exhibit in Jamaica during the sixties and seventies. Described as a quiet and systematic worker, he was possibly the first of Jamaica’s artists to develop the idea of working ‘serially’- creating a series of works based on a single theme. In fact, it was his Flora series (1969-1973) that brought him public recognition as an accomplished young Jamaican painter.

END_OF_DOCUMENT_TOKEN_TO_BE_REPLACED

This post – another in our series in Jamaica’s art pioneers – was researched and written by Monique Barnett, our new Curatorial Assistant. Monique is a graduae of the Edna Manley College (Painting) and has previously worked with Ardenne High School and the MultiCare Foundation.

At the opening of the Karl Parboosingh Retrospective, held posthumously at the National Gallery of Jamaica on December 15, 1975, the Honourable Michael Manley, Prime Minister and guest speaker, spoke these words about the painter:

Parboo felt strongly that art should be functional…the viewer…must somehow be brought into the situation which the artist’s brush described and must find himself reacting to the message of the artist. And Parboo insisted – there must be a message.

END_OF_DOCUMENT_TOKEN_TO_BE_REPLACED

The heart has been ripped out of Jamaican nationalist culture, but the soul remains. His is an incredible legacy of providing us practitioners with a range of strategies for self-definition in both the personal sense and in the national sense.

The Board and Staff of the National Gallery of Jamaica are deeply saddened by the passing of that giant among Jamaica’s creative artists and men of letters, Rex Nettleford. His prodigious writings and achievements as a scholar and educator and his role in fashioning this nation’s premier performing ensemble, the National Dance Theatre Company will be much remarked on in the weeks to come; and any quick perusal of his biography on the internet will yield up the awesomely impressive statistics of this much honoured son of Jamaica who carried this country’s name high wherever discussion and debate about the renaissance of  a true and honourable Black identity took place. We will not recount these facts and statistics here; we would like instead to simply record our own deep gratitude for Rex Nettleford’s continued interaction with this institution from the early days of our gestation when he worked with Edna Manley and Michael Manley, Maurice Facey and Jean Smith and dozens others to establish this Institution.