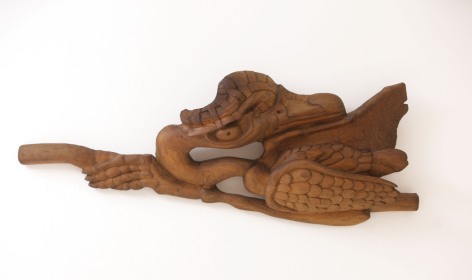 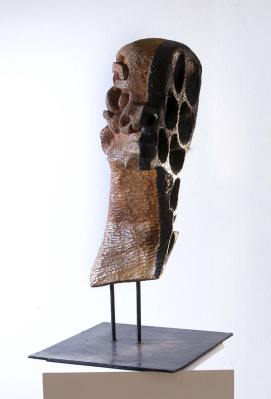 Errol McKenzie – Balance of the Root of Christ (1998), Wayne and Myrene Cox Collection..

Spiritual Yards: Home Ground of Jamaica’s Intuitives – Selections from the Wayne and Myrene Cox Collection, continues until January 29, 2017, and explores the spiritual yard tradition in Jamaica, through ten Intuitive artists whose work is steeped in that tradition. The works of art and documentary material in this exhibition were selected from the Wayne and Myrene Cox Collection, a specialized collection of Intuitive Art. Here is the final of our posts on the artists in the exhibition, along with video footage, courtesy of Wayne Cox.

Errol McKenzie (b1954) lives in Walderston in the hills of Manchester. His belief system is is based on his very own spiritual concepts. Aspects of his philosophy, for example, hold the moon as “the centre of energy and eternal power” and women as natural-born leaders. Nowhere is this best expressed by him than in the design of his home called Black Moon Island, home of the “Moon Mother”– an organically shaped stone-house which utilizes concrete wood to create a number of interconnected chambers of varying shapes. As an artist, McKenzie’s body of work includes woodcarvings, cemented free forms, stone arrangements and paintings, all of which display surrealistic elements. Similar to other Jamaican self-taught artists like Brother Brown, Errol McKenzie has a fair amount of international acclaim, having been featured in a number of overseas exhibitions as well as in international publications on “outsider art” such as Raw Vision magazine. Locally, McKenzie’s work has been widely exhibited including the National Gallery of Jamaica’s Intuitives series and Redemption Songs: The Self-Taught Artists of Jamaica (1997) organized by the Diggs Gallery, USA. He was awarded a Bronze Musgrave Medal in Art by the Institute of Jamaica in 1997.