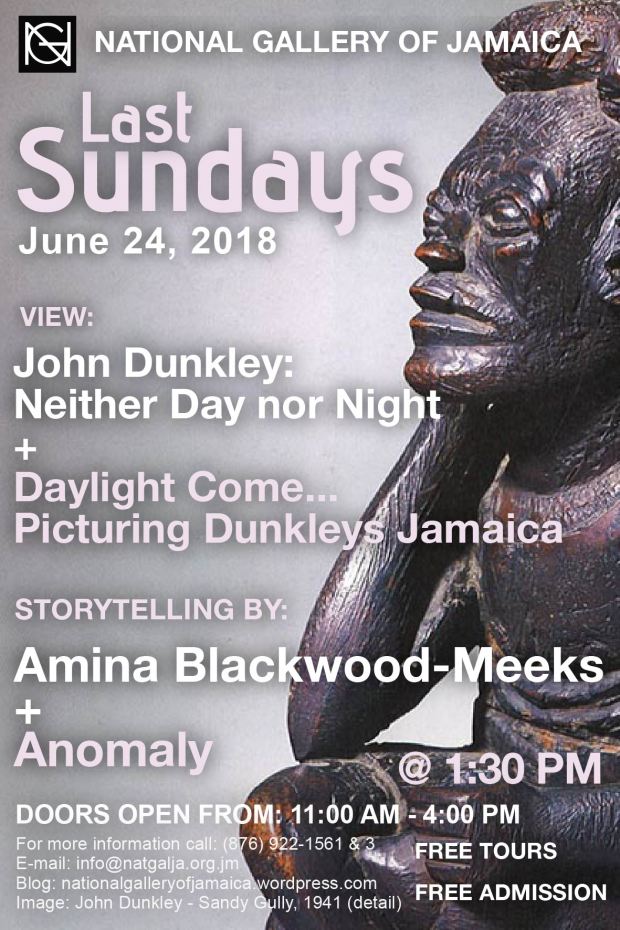 The National Gallery of Jamaica’s Last Sundays programming for June 24th will feature storytelling by Amina Blackwood-Meeks and the visual and performing arts group Anomaly. The exhibitions John Dunkley: Neither Day nor Night and Daylight Come: Picturing Dunkley’s Jamaica will also be on view.

Both exhibitions are filled with stories of Jamaican histories which are rich in their potential to inspire storytellers and on this Last Sunday we welcome writer, director, performer, and custodian of the oral tradition, Dr. Amina Blackwood-Meeks. Widely acclaimed for her contribution to the renaissance of the traditional Caribbean storytelling art form, Blackwood-Meeks communicates both traditional and modern tales and her “…deep, rich, dramatic and deliberate voice brings stories from the heads of the ancestors, connecting ancient wit and wisdom with modern needs.” Her performance on Sunday has been inspired by closely interfacing with the current exhibitions and is guaranteed to delight children and adults alike.   See her website at http://aminablackwoodmeeks.com/.

Formed in 2016, the creative arts company Anomaly interweaves dance and drama to bring about the personal and social development of their performers and audiences. Anomaly has produced an annual creative arts festival and a creative arts summer camp for children. In their own words “We believe in the interaction of creative minds to amplify the art industry in Jamaica.”

Originally exhibited at the Perez Art Museum Miami (PAMM) in 2017 and considered to be one of the most exciting shows that year in the USA, John Dunkley Neither Day nor Night showcases a once in a lifetime compilation of the work of renowned Jamaican Intuitive artist, John Dunkley (1891-1947). Born in Savanna-la-Mar, Dunkley was of the generation of Jamaicans who travelled to Panama, Costa Rica and Cuba at the beginning of the 20th Century seeking opportunities for work and advancement. His moody paintings and whimsical sculptures reflect his life, experiences and views on Jamaica’s fledgling nationalist movement. The National Gallery’s version of the exhibition, which opened on April 29 and closes on July 29, contains important new work not shown at PAMM.

Exploring themes of tourism, immigration and the emergence of cultural nationalism during Dunkley’s lifetime; Daylight Come…Picturing Dunkley’s Jamaica acts as a complement to John Dunkley: Neither Day nor Night. The exhibition contains rare photographs, artefacts and film footage from the turn of the century leading into the Jamaican Nationalist era and provides further context to Dunkley’s creative output. It explores the work of his contemporaries David Miller Snr and David Miller Jnr, Carl Abrahams, Albert Huie, David Pottinger, Ralph Campbell and Henry Daley among others; and shows the move from ethnographic and oftentimes disparaging depictions of Jamaicans, to the attempts at social and cultural empowerment by the aforementioned artists and others of the Jamaican Cultural Nationalist movement of the early 1900s. This exhibition, which opened on May 27, will also be on view until July 29.

Doors will open to the public from 11:00 am to 4:00 pm. Storytelling by Amina Blackwood-Meeks will begin at 1:30 p.m followed by Anomaly’s performance. As is customary on Last Sundays, admission and guided tours are free, but contributions to the Donations Box located in the Coffee Shop are appreciated. These donations help to fund our Last Sunday’s events. The National Gallery’s Gift Shop and Coffee Shop will also be open for business. 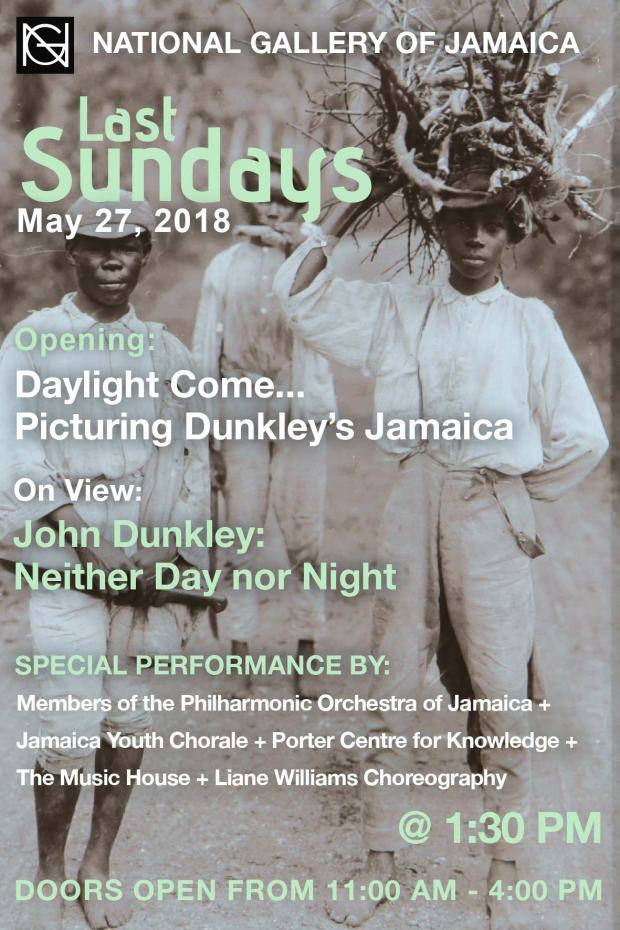 The National Gallery of Jamaica’s Last Sundays programme for the month of May will mark the opening of a new exhibition Daylight Come…Picturing Dunkley’s Jamaica. It will also feature a special ensemble musical performance as part of Lupus Awareness month activities.

Daylight Come…Picturing Dunkley’s Jamaica complements the John Dunkley: Neither Day nor Night exhibition which opened on April 29.This retrospective of Dunkley’s work was curated by independent curator Diana Nawi, formerly of the Perez Art Museum Miami (PAMM), and Nicole Smythe-Johnson, independent Jamaican curator and writer. Originally shown at PAMM in 2017, this version includes six works that were not part of that initial exhibition. 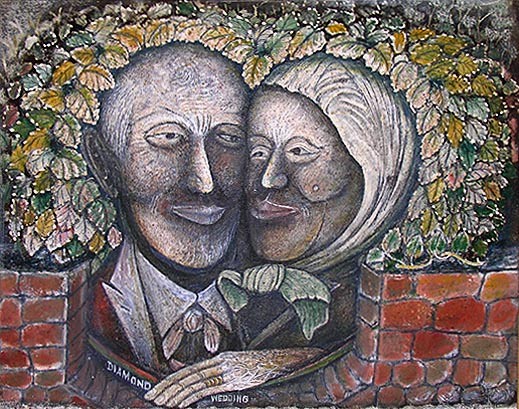 This new exhibition Daylight Come… explores themes such as tourism, immigration and the emergence of cultural nationalism in Jamaica during Dunkley’s lifetime. The exhibition provides further context to Dunkley’s creative output; exploring the works of his contemporaries David Miller Snr and David Miller Jnr, Carl Abrahams, Albert Huie, David Pottinger, Ralph Campbell and Henry Daley among others. This exhibition will be on view until July 29, 2018.

May is Lupus Awareness Month and the special musical performance this Last Sundays serves as one of the activities to raise awareness to this life-altering disease. The music, poetry and dance that will be performed are all inspired by the emotional states experienced by someone with Lupus. The various performers include members of the Philharmonic Orchestra of Jamaica, the Jamaica Youth Chorale, the Porter Centre for Knowledge and The Music House.

As is now customary for our Sunday programmes, the doors will be open to the public from 11 am to 4 pm and the special musical performance starts at 1:30 pm. Admission and guided tours will be free. The gift and coffee shop will also be open for business.

With this post, we launch a new series of features on the pioneers of modern Jamaican art. This article was written by O’Neil Lawrence who acts as Assistant Curator.

Born on September 13th 1911 in Kingston, Jamaica, David “Jack” Pottinger is considered by many to be one of Jamaica’s finest painters. He grew up on Prince Street in downtown Kingston, influenced by the rhythm of life vendors and many Pocomania meetings that took place there. He took a course in house painting, paid for by his mother so that he could do it professionally, and also embarked on the enterprise of sign painting at the encouragement of a Mr. Bailey: a butcher who believed there was something more to this young house painter. And there was; he was to become a central figure in the early defining years of the nationalist movement. END_OF_DOCUMENT_TOKEN_TO_BE_REPLACED