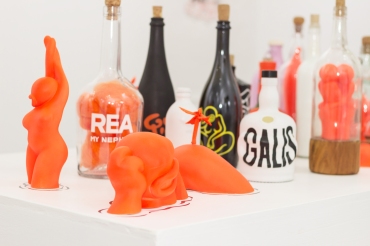 We have met before. Four centuries separate our first meeting when Prospero was graced with the role of thief, merchant and man of God. Our hero was ‘the right worshipfull and valiant night Sir John Haukins, sometimes treasurer of her Majesties navie Roial’; and it is his first Voyage in search of human merchandise.

We Have Met Before, which will be on view at the NGJ from September 22 to November 4, reflects on the question of historical forgetfulness and the capacity of art to unearth and to shed new light on what is forgotten or supressed. The four artists—Graham Fagen from Scotland, Joscelyn Gardner from Barbados and Canada, Leasho Johnson from Jamaica and Ingrid Pollard from Guyana and England— and the works selected for this exhibition represent a conversation on the histories of Slavery, the Transatlantic trade, and its present-day implications. Each artist brings a distinctive perspective to this subject area, with work that was created in different locales, different media, from different experiences, and at different points in time.

These subjects are of course not new and commonly appear in modern and contemporary art from the Caribbean and its Diaspora, as well as in other art forms such as dance, drama, literature and music. In Jamaica, the subjects hold a central position in Garvey and Rastafari culture, which has produced a recognizable African Zionist iconography that is prominent in the popular visual culture and the visual arts. The histories of slavery have been very contentious as a subject area in Caribbean art and this is particularly pronounced in public art, as was best illustrated by the intense controversy about Laura Facey’s Redemption Song (2003), Jamaica’s de facto Emancipation monument. This controversy raised many questions about the representational choices and the equally contentious issue of who can legitimately speak about this subject.

We Have Met Before revisits this complex and contentious territory, and acknowledges that much has been suppressed and left unsaid, especially by the former colonizers. The exhibition argues that the subject area needs to be approached as part of an ongoing conversation, in which there is no final word and in which it must be possible for various perspectives to be expressed. The resulting conversations may be difficult but they are necessary, as they are central to the histories that have shaped and continue to shape the contemporary Caribbean world, and it is hoped that this exhibition will contribute to this process.