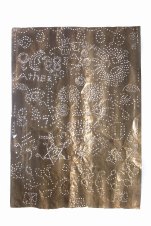 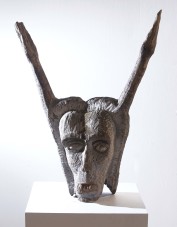 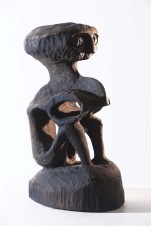 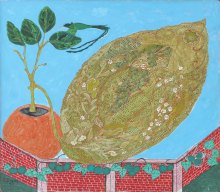 Everald Brown – One String Base (1960), Wayne and Myrene Cox Collection

Spiritual Yards: Home Ground of Jamaica’s Intuitives – Selections from the Wayne and Myrene Cox Collection, opens on December 11. Here is a post on three of the artists in the exhibition, along with video footage, courtesy of Wayne Cox.

Errol Lloyd “Powah” Atherton (1961-2012) lived in Albany, St Mary. He participated in Kumina-influenced Bongo meetings and had a deep sense of the power of the ancestors. He was also the son of intuitive artist, Vincent Atherton, creating, in Randall Morris’ words, “one of the most powerful yard shows in Jamaica with offertory seals honouring the carvings of his father, Vincent.” In addition to carving, he also painted words on wood and zinc to invoke the ancestors. Powah’s work has been exhibited locally since around 2000, when it was featured in the exhibition Prophets and Messengers, held at the Mutual Gallery in Kingston, Jamaica. His work was also featured in 2008 as a part of the National Biennial, held at the National Gallery of Jamaica. He is represented in a number of private and public collections—local and overseas—including the collection of the Patricia and Phillip Frost Art Museum in Miami.

Vincent Atherton (1924-2007) lived in Albany, St Mary. He worked as a groundskeeper at the Green Castle estate and he had a carving shack on the property. It was during this time that he developed his carving skills, initially focusing on utilitarian wooden items such as axe handles and vases before transitioning into his own conceptual forms, which included effigy figures, amulets, helmets and staffs. A number of these are reminiscent of similar objects carved in Taino and some African traditions. Atherton described the objects as possessing great spiritual power and influence for protecting and guarding or to pacify spiritual forces. In some instances, he carved such objects in response to specific events and phenomena, for example, during the transition into the new millennium in 2000. Several of his sons were also carvers, more importantly, Errol Lloyd Atherton. Vincent Atherton’s work has been exhibited locally, most notably in the exhibition Intuitives III (2006) held at the National Gallery of Jamaica, and has also been widely exhibited in the United States. His work is in the collection of the Patricia and Phillip Frost Art Museum in Miami.

Everald Brown (1917-2003) also called “Brother Brown,” was born in Clarendon as the fifth of seven children and the only son of his parents Robert and Nelly Brown. His mother was a religious Baptist, who influenced him on his spiritual path. In 1946, Brother Brown married Jenny Gray with whom he had ten children. One year later they settled at 82 ½ Spanish Town Road, a yard which housed several religious groups. There he became aware of Rastafari and the Ethiopian Orthodox church, establishing the Assembly of the Living as a self-appointed mission of the latter. Around 1973, as a result increasingly volatile social environment of West Kingston, Brother Brown relocated his family and mission to Murray Mountain in deep rural St Ann. Much of the imagery in his artworks were expressions from his visions. Many of these included mystical depictions of landscapes, animals, plants and other beings of the physical as well as supernatural world. He has become highly regarded for creating a rather diverse complement of highly decorated art and religious objects including paintings, wood carvings and a variety of musical instruments of his own design. According to him, “my painting is not just an expression of what is, but what I would like things to be—what things should be.” His artistic legacy has been maintained to an extent by his children, some of whom are also regarded as established Jamaican artists. In 1973, he was awarded a Silver Musgrave Medal for Art by the Institute of Jamaica. Brother Brown was a frequent exhibitor in numerous local and international. Notable showings include the Intuitives exhibition series of the National Gallery of Jamaica and the most comprehensive posthumous exhibition of his work, The Rainbow Valley: Everald Brown, A Retrospective, organized by the National Gallery of Jamaica in 2004. He is represented in a number of private and public collections, locally and internationally.