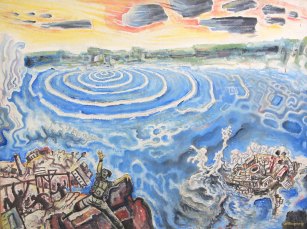 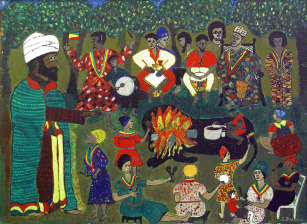 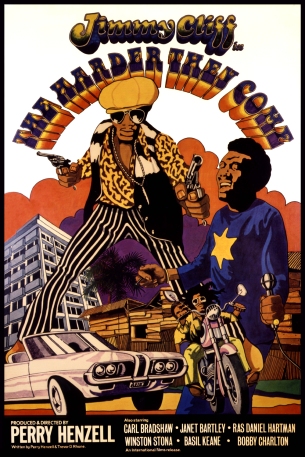 Film poster – The Harder They Come (1972), courtesy of the Perry Henzell estate 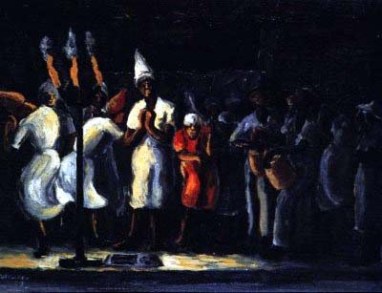 Here is the final of our features on the Kingston – Part 1: The City and Art exhibition:

In addition to concrete structures and infrastructures, stories from the documented and lived experiences of generations of Kingston inhabitants and visitors, contribute to this city’s character, to its celebrity and its infamy. The events, personalities and tales that have shaped this city are part of its collective imagery and have provided major inspiration for artists, some of whom are themselves among the city’s key personalities. A variety of stories have already been explored in the preceding galleries. However, this section focuses on a distinct selection of narratives that are particularly relevant to Kingston events and experiences.

Kingston and its environs have been the sites of some of the deadliest natural disasters in human history and this has been recognized and recorded by documenters and artists alike. The apocalyptic destruction of Port Royal in 1692, was re-imagined by Carl Abrahams in several works produced in the mid-1970s. The 1907 earthquake which almost obliterated Kingston is memorialized forever by several archival photographs from the period which can be found at institutions such as the National Library of Jamaica, another Downtown Kingston institution situated on East Street. Despair in the aftermath of Hurricane Charlie, the deadliest storm of 1951, is expressed in two oil paintings created in the same year by poet and playwright Roger Mais, and his seemingly broken and dejected figures are almost camouflaged within the debris left in the storm’s wake, becoming one with the devastation.

Several works in this section comment critically on the social life of Kingston. The works of Roy Reid, Edna Manley and later, Stanford Watson and Ikem Smith for instance, question ongoing issues of social inequality, economic downturn, violence and civil unrest. Michael Parchment’s No Woman Nuh Cry (2005), a visualization of the 1975 reggae ballad of the same name performed by Bob Marley and the Wailers, reiterates that critical value of endurance in the face of adversity and atrocity resulting from the wave of violence that permeated Jamaica’s inner-cities in the 1970s. Interestingly, the reggae music and the visual arts communities have benefitted greatly from the creative insights of personages like Bob Marley, Peter Tosh, Bunny Wailer and a number of other Jamaican musicians, many of whom originated from Kingston or migrated to the city to seek their fortune at Kingston’s active entertainment scene and recording studios. It was in Kingston at the National Stadium on Arthur Wint Drive that the historic One Love Peace Concert took place in April 1978. The concert took place during the climax of a deadly political war between gang supporters of the People’s National Party (PNP) and the Jamaica Labour Party (JLP). Jamaican photographer Howard Moo-Young captures on film the most memorable highlight of the show, when Bob Marley during his performance of the song Jammin invited the two political leaders to the stage—the then Prime Minister Michael Manley of the People’s National Party and the then Leader of the Opposition, Edward Seaga of the Jamaica Labour Party–and encouraged them to join hands before the audience as a symbolic gesture towards peace and unity.

Adherence to deep spiritual convictions appear to provide balance to otherwise turbulent social phenomena in Kingston, as evidenced by the diversity of religious communities that are based here. Interestingly, some of Kingston’s most prolific artists were also religious leaders, such as Mallica “Kapo” Reynolds and Everald Brown. Everald Brown moved to Kingston from Clarendon in 1947, eventually settling at 82 ½ Spanish Town Road. An adherent of the Ethiopian Orthodox Church, he formed the Assembly of the Living as “a self-appointed mission” of his church and started producing art to decorate and spiritually enrich his church. Brown moved his family to Murray Mountain in St Ann to escape the escalating urban violence. Kapo, who left his home in Byndloss in rural St Catherine and moved to Trench Town and later Waterhouse in Western Kingston, founded the Revivalist church community, the St Michael Tabernacle of which he was the Patriarch Bishop. Almost all of Kapo’s work is directly or indirectly related to his Revivalist beliefs. A reference to Kingston’s Jewish community is made in Maria LaYacona’s portrait of the industrialist and art patron Aaron Joseph Matalon, standing inside Shaare Shalom Synagogue located at 92 Duke Street, one of the oldest synagogues in the Western Hemisphere. Such an image reflects the legacy of Kingston’s Jewish community who have been present in the island since the fifteenth century and the immense contribution to cultural and social development made by them, as exemplified by the Matalon family business enterprises.

State visits are always key events in a capital city such as Kingston, in some instances attracting massive crowds of onlookers; some of them travelling great distances to the city to witness famous arrivals. Queen Elizabeth II was the first reigning sovereign to visit the island. Accompanied by her consort the Duke of Edinburgh Prince Phillip, she arrived in 1953. The Polish artist Michael Lester, who in that same year relocated to Montego Bay, was commissioned to create the official painting of the visit. Lester captured the day of departure for the Royals, where he was permitted the freedom to position himself to the best advantage in order to capture the details he needed complete the commission. The arrival of His Imperial Majesty Haile Selassie of Ethiopia in 1966 at the Palisadoes Airport (now named the Norman Manley International Airport) was one of the most dramatic in Jamaican history as an estimated 100,000 Rastafari from across the island descended upon the airport to welcome and celebrate the Ethiopian Monarch hailed by them as the earthly re-incarnation of God. Clinton Brown’s painting Victory March (1976) similarly celebrates the divinity of the Ethiopian king, leading a throng of celebrants into what appears to be Zion, the Rastafari equivalent of “Heaven.”

Stories to Tell ends with perhaps one of the greatest Jamaican films of all time, The Harder They Come, released in 1972 and starring reggae singer Jimmy Cliff as the film’s tragic protagonist, Ivanhoe Martin. Written by Perry Henzell and Trevor Rhone and directed by Henzell, the film’s celebrity is derived from its all-Jamaican production and casting, as well as its reggae soundtrack, which garnered much more international attention for the home-grown music genre. The film’s gripping narrative about an aspiring but naïve young man coming to seek a fortune in Kingston but falling prey to the grim realities of poverty in a big city, was based on an actual story (the life of the notorious gunman Rhygin) and presented a highly relatable Jamaican tale for many Jamaicans and viewers overseas. The film’s cinematographic approach produced the most comprehensive set of Kingston vistas ever portrayed in film; from depictions of “uptown” communities, to the inner cities, business centres and the areas around the Kingston Harbour.

One thought on “Kingston: Stories to Tell”