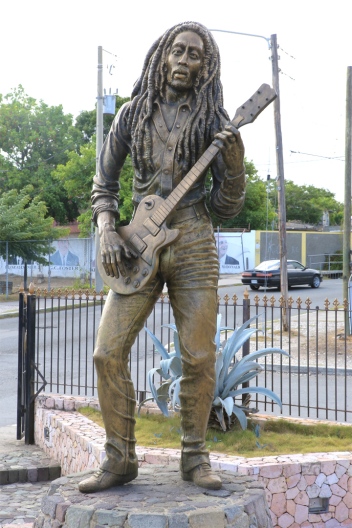 Here is another feature on the themes that structure the Kingston – Part 1: The City and Art exhibition, written by the exhibition curator, Monique Barnett-Davidson:

A simple bus commute or walking tour of the city can bring one into an even more direct engagement with Kingston’s artistic heritage. Street and public art proliferate in the city, whether as officially commissioned statues, monuments and murals, or more informal expressions on community walls, vehicles or vending stalls. These works are experienced on a daily basis by the people who use, traverse, relax or congregate around these spaces and often command their surroundings as iconic landmarks.

As Jamaica’s capital, Kingston is home to a number of public monuments. Their narratives reflect memories of historic triumph, expressions of hope in the face of adversity, or simply reflection in the wake of tragedy; exemplified by Edna Manley’s Negro Aroused sculpture, the monuments of the National Heroes Park, and the Secret Gardens monument, which are all located in Downtown Kingston. Secret Gardens was commissioned by the Kingston and St Andrew Corporation, the local government authority, to commemorate children who die under tragic or violent circumstances and the local media recently reported that no more space was left to add further names—a very sad reflection of the vulnerability of children in Jamaican society.

Some of these monuments, such as Laura Facey’s Redemption Song at the Emancipation Park in New Kingston, are major aesthetic and technical feats, undertaken by fine artists, architects and engineers. Redemption Song was very controversial when it was first unveiled as Jamaica’s de facto Emancipation monument in 2003 but it is but just one of several monuments that  have been controversial—a reflection of the passions and contentions that surround public commemoration in a socially turbulent society. The first such controversy pertained to the proposed National Monument to commemorate the first anniversary of Independence in 1963, a project that was initiated by the art patron A.D. Scott and to be executed by the noted sculptor Alvin Marriott. The monument, which was to be erected at the Harbour View Roundabout, was never completed as a result. Another major controversy involved the symbolically charged Bob Marley statue by Christopher Gonzalez, which had to be removed before it was unveiled near the National Stadium in 1983 because of the negative public reaction. It was replaced by a more conventional statue by Alvin Marriott in 1985 and the Gonzalez statue is presently on view at Island Village in Ocho Rios, a touristic site.

Jamaican street art in many ways serve the same function as, and sometimes shares the space with official monuments. Street art generally tend to reflect a combination of commemoration and valorization specific to a community’s identity, circumstance and culture and some of it simply serves to assert the life views and aspirations of an individual, such as a vendor or driver. Mural portraits of community members, gang and community leaders, national heroes, international figures and musicians are in abundance, such as those found at the Lyndhurst Road recording studio of late dancehall artist, Sugar Minott. Some of these portraits are commemorative and serve to honour and remember community members who have passed away, often under violent circumstances. These too have sometimes been controversial, since the Police sometimes remove murals that are deemed to be associated with gang violence, without much consideration for the sensibilities of families and communities in mourning.

Kingston is not a conventionally “pretty” city, especially in the inner-cities, and Kingstonians arguably respond to their drab concrete environs with colourful wall murals, painted and spray-painted decorations on houses, buses and vehicles that flash by. Artistic social interventions such as the recent Paint Jamaica murals at 44 Fleet Street, capitalize on this culture of colouring the city as way of creating positive and productive relationships among artists, businesses and residents.

2 thoughts on “Kingston: Art on the Streets”