We now present part II of the December 6, 2015 opening speech by Dr Michael A. Bucknor for the Explorations IV: Masculinites exhibition. For part one, please click here.

Anchoring the idea that gender, as Judith Butler and others have pointed out, is a matter of performance, costuming the body is part of the performance paraphernalia that we use in our attempt to consolidate gender norms. (ASIDE: You know, I should have worn the pink shirt today with the flamboyant cuff on the sleeves, rather than this conservative blue one to make that point. Or perhaps wearing the conservative blue, but expressing less than traditional views about masculinity might also make the point. Let me now adjust this traditional costume by putting on this red scarf.)

It seems that dancehall culture is well aware of the role of the costume to changing identities and appropriating images of the self that one wants to project in this postcolonial world where, for some, the one thing they have agency over is their own bodies. The attendant values of competition and innovation that seem to dominate dancehall music also feed upon this ability to transform identity and provide a ready language for [Ebony] Patterson’s gender interrogation; yet, these two values also help to expose the “fabricatedness” of identities and the unnaturalness of the normative. Dress as connecting motif inspires us to consider the costuming of the body in Patterson’s work in relationship to Marlon James’s photography in “Vogue” (2012) where the gender is created through costuming—flamboyant cross-dressing as is also seen in Belisario’s “Koo, Koo or Actor-Boy (1837), where the masquerade of Jonkonnu crosses not only gendered identity, but race as well as class. From Jonkonnu to Dancehall, these artistic portrayals suggest how costuming the body is a performance that enacts and troubles gendered identities.[i] In Gallery 2 we see how clothing (and positioning of) the body determines class, status and economic privilege or lack thereof in Phillip Wickstead’s “Portrait of Benjamin and Mary Pusey” (c1775) which can be viewed in relationship to the 1908-1909 Sir Harry Johnston’s photograph, “Jamaican Negroes” or the 1901 A. Duperly and Sons’ “Castleton Gardens,” both in Gallery 5.

As I close this talk, I want to make two more brief comments about crossings in this exhibition. The conversations across Jamaican history mentioned before are evident throughout the entire exhibition. Cross-referencing is a curatorial premise! We cannot help such cross-referencing in say Gallery 1 between Archie Lindo’s Untitled (1950) photograph of the arched back of a naked black man’s body photographed in the private space and Wayne Rhoden’s “Jamar” whose subject with naked back exposed is photographed on the more public space of a beach. There are also resonances and dissonances in Gallery 3 with all the aroused black men featured, from Edna Manley’s “Negro Aroused” 1935, to Christopher Gonzales’ “Man Arisen” 1966 and the 1980s-1990s work by Omari Ra entitled “Triumph.”

Less obvious cross reading might also take place between Leasho Johnson’s Banana series in Gallery 1 which uses the hypersexual phallic image of the banana to interrogate and make fun of the Jamaican’s man’s phallic preoccupation and Kapo’s diminutive phalluses in most of his carvings and other art works including “Copeland Boxer” (Dillinger) whose power is in his arms (Gallery 4). This cross-reading reminds us that Jamaican manhood need not be defined in terms of phallic power nor even in the possession of powerful arms as in the photograph of an assertive masculinity not limited by the power of one’s limbs in Varun Baker’s 2013 “Journey 6” in Gallery 3. 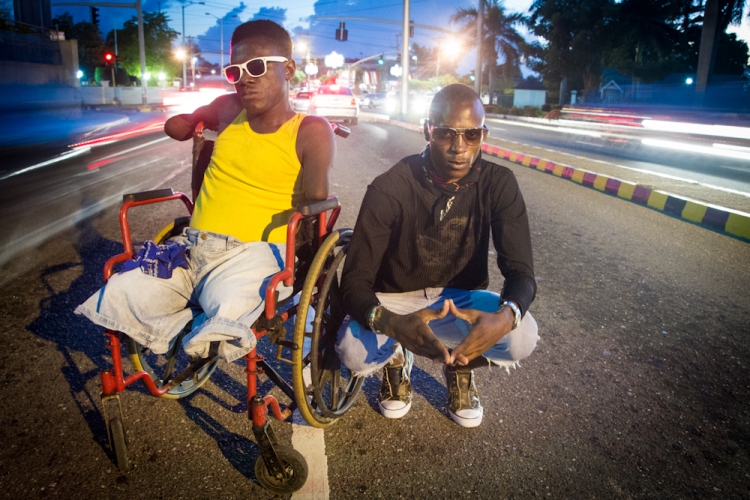 Kapo’s work also helps me to make the last point which is about cross-species references in this exhibition. Kapo’s “The Angel” (Winged Moon Man) engages a conversation with Patterson’s “androgynous bird-human hybrids” (Lawrence) as well as Milton George’s “Pages from a Diary” whose figures are a mysterious mix of human, animal and masquerade that suggests the power of mythology and the imagination to project new visions of masculinity.[ii] The human/bird motif for example helps us to appreciate the idea of the nurturing man as in Edna Manley’s “Man With Wounded Bird.” I want to end this discussion by making the claim that acts of the imagination provide a nation with its most powerful expressions of freedom and the freedom to chart new paths or in the words of David Scott to “fashion futures” for Jamaican masculinities. This “elastic imagination”[iii] is central to what this exhibition of Jamaican visual artistes has shown. In the words of Patricia Powel, a Jamaican novelist who has been focused on Jamaican masculinities:

(‘A Search for Caribbean Masculinities”) 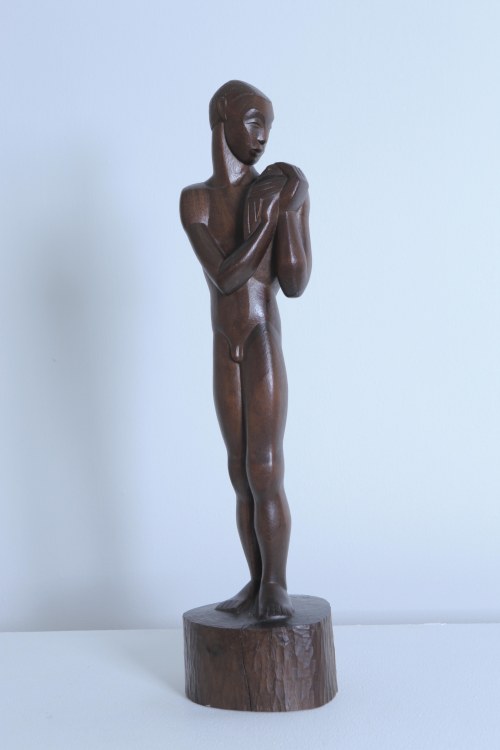 Dr Michael A. Bucknor is Senior Lecturer, Public Orator and Head of the Department of Literatures in English at the University of the West Indies, Mona.

[i] See Kei Miller’s ‘Maybe Bellywoman Was on ‘Di Tape’” Writing Down the Vision: Essays & Prophesies in which he suggests that cultural practices such as the Jonkonnu are informed by queerness.

[ii] See Kei Miller’s notion of the relationship between mythology and “an elastic imagination” (Writing Down 104).

One thought on “Michael A. Bucknor – Refashioning Futures for Jamaican Masculinities (Part II)”