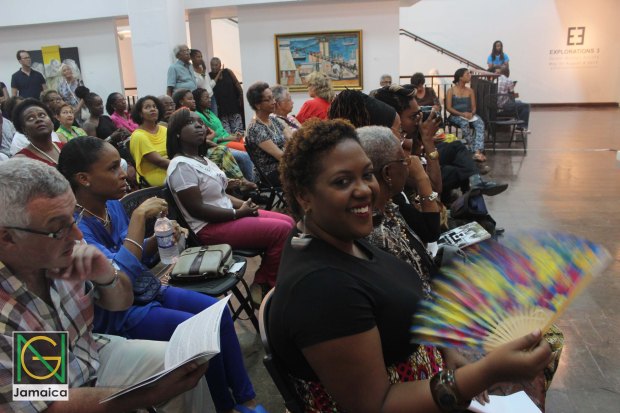 We are pleased to present the remarks presented by poet and scholar Tanya Shirley at opening of Explorations 3: Seven Women Artists on Sunday, May 31, 2015:

If my grandmother saw her children looking untidy she would say, “How you look like you a live bad a man yard so.” The aim of my talk this afternoon is to reclaim my grandmother’s phrase and apply it to the Jamaican art scene where Jamaica is the man’s yard and female artists through the simple act of creating art are being bad. However, I perceive this badness as a good thing: a subversive act of rebellion. My grandmother used the phrase to imply that her daughters looked as if they were being ill-treated by a man. One could argue that the phrase is a metaphor for how patriarchal strictures in our society still prevent female artists from gaining the maximum benefits that could be derived from their artistic output. I want to make it clear that I am not talking today as an art critic. I leave that to the experts like Veerle and O’Neil. I’m a poet and poetry is art; therefore, I am talking about my journey as a female artist. From that viewpoint, I will also address the term “women’s art” or “female art” and how I think the category assists and restricts the work that we do as female artists.

When I was a graduate student at the University of Maryland, I had the honour of having breakfast with the esteemed poet, Derek Walcott. Of course I’ve seen Walcott on many occasions since then and I can tell he has no recollection of our meeting and why should he, I was but a mere graduate student at one of his many university visits. However, that meeting was instrumental for me because one of the things he said very early on in our conversation was, “Don’t ever get married or have children…I’ve met too many good female poets who’ve stopped writing because their responsibilities got in the way.”

One could argue that his sentiment was fuelled by chauvinism and stereotypical ideas of femininity. However, the truth of the matter is that many great female artists have had to deal with the burden of creating art while fulfilling society’s role of the “real woman”; especially in our Jamaican context, where I would argue that art is still not perceived as a viable occupation and though we have many women in managerial positions, women are still judged by their ability to master the traditional roles of wife, mother and housekeeper. As an aside, I will give you a joke, I went to the mineral bath in St Thomas a few years ago and one of the informal masseurs, while massaging me, asked if I had children and when I said no, my good-good therapeutic massage turned into a blessing and a “balming” for my poor, barren womb. Up to when I was getting into my car, this man was still reaching through the window to touch my belly and chant a few Psalms for my womb.

As female artists, when we create in an environment like this, we are constantly aware of the politics of going against the grain. Women are permitted to dabble in the arts as a hobby but when you brand yourself as a serious artist, when you have the audacity to exhibit your work and to spend countless hours creating art, it means that you run the risk of being perceived as a ‘bad’ woman, one who is perhaps neglecting the more important work of contributing to society via traditionally prescribed roles. As the writer Virginia Wolf said, women need a room of their own and metaphorically that applies to having the space to create. The challenge for women artists is that society often does not grant them that space in the same way that men are given the space to work. In the same way that black children in the United State are often told, “you must work twice as hard,” the female artist has to work twice as hard just to claim and maintain her space as an artist. Therefore, when a woman produces art, it is in many ways a rebellious act and her work automatically becomes political.

The term “women’s art” is still useful in societies where there is a drastic gender imbalance in the art world and it emerged at a historical juncture when feminists critics began exploring the under representation of art by women. The classification gives currency and validity to the existence of art by women. It encourages cultural critics to engage with multiple artists rather than examining the work of a female artist as an anomaly or a one-off production. However, too often the classification is reductive and as audiences and critics we are being encouraged to search for stereotypical commonalities in the art produced by women. The irony is that when art is examined under the microscope of female sensibilities it is these same characteristics that are used to dismiss the work as trivial. When my first poetry collection came out in 2009, a Jamaican male critic in his review stated,

Some poets write about the landscape, some about religious, social and political issues; others dwell on the metaphysics, the human spirit, mankind and its idiosyncrasies. However, Tanya Shirley, in her first collection of poems, has delved into the personal… So, if you are into the notion of embracing other people’s personal thoughts and feelings, this is the perfect book for you.

The quote reeks of condescension and the contrapuntal placement of the personal and the political as well as the personal and the other topics mentioned (which I would add were all dealt with in the collection) suggest that one’s personal feelings and thoughts are never about “religion, the human spirit or mankind and its idiosyncrasies.” I am sure this reviewer would label my work as “female poetry” except for him that meant, poetry that was overly and distastefully personal. You know…the things that those silly women write about…feelings….yuck! It is for that reason that I am reluctant to embrace the term “women’s art.” What I do embrace is that art by women does exist and has been and will always be relevant.

I view art as a political platform that can mirror a society as well as impel it to be greater. The artistic landscape of a country cannot be processed as a mirror if only one segment of that society participates in artistic production. The art on view today shows that women are using a vast array of media to create work that covers the gamut of societal issues and their perspectives though possibly informed by their experiences as women, are certainly not defined by same. We could go further to add that if we accept that gender is performative rather than biological then the whole notion of female art is open to multiple interpretations. Female art in the stereotypical sense of what women are expected to produce can therefore be performed by males. I won’t go further into that but I use it as another example of the challenges associated with appropriating the term “women’s art.” 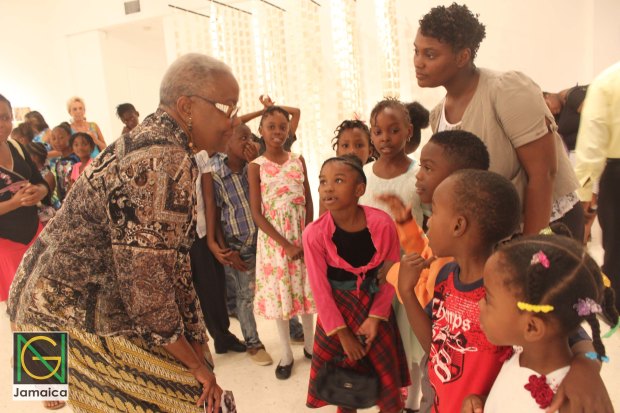 Artist Judith Salmon, one of the seven women artists represented in Explorations 3, interacts with a group of children at the exhibition opening

I will conclude by saying that though I’m reluctant to embrace the term in relation to what women artists are expected to produce, I do think that the term may be useful in challenging the “big boys club” that sadly still exists and often wields financial power. How many art collectors are investing in female art? Are we more inclined to haggle with a female artist over price? How many art connoisseurs when asked to recommend an artist would recommend a female artist? There is power in numbers and when we group female artists under one umbrella it is one way of saying to the powers that be that there are so many of us it will be difficult to continue to only grant opportunities to male artists. A few years ago at a prestigious American writer’s conference there was a panel of writers all published by Peepal Tree Press in the UK which is an excellent publishing house that is now the preeminent publisher for Caribbean writers, and the title of the panel was “The Fruit of the Peepal: A Conversation with African and Caribbean Poets from the UK & North American Diasporas.” Well you can imagine the feedback the publishers got when it was discovered that a panel of fruits consisted of six male writers. Too often, I see photos of writers at conferences and festivals in the region and there are only a handful of female writers present when the truth is that there are many female writers now published in the region. Their absence also begs the question of whether women artists can capitalize on international opportunities because of their responsibilities as mothers and housekeepers. Are there sufficient resources in place to facilitate women’s advancement in the artistic arena? In the same vein, too often when we ask people to list their favourite artists or to discuss art in Jamaica, the impulse is usually to first list male artists and then almost as an afterthought, a few female artists may be sprinkled into the mix.

What this exhibition reminds us is that there are many accomplished female artists doing ground-breaking work in our country and their names deserve to be on the tips of our tongues. Art historian Linda Nochlin, as cited in Maura Reilly’s article in ArtNews says, “women need to consistently make trouble.” I applaud the seven women artists whose work is on display today for being rebellious and behaving badly in the man’s yard.

And I beg your indulgence as I conclude with a poem I wrote and hopefully it will remind us of how art multiplies and spirals out into the world and of the value of the art here on display; how all seven artists are commenting on human experience. 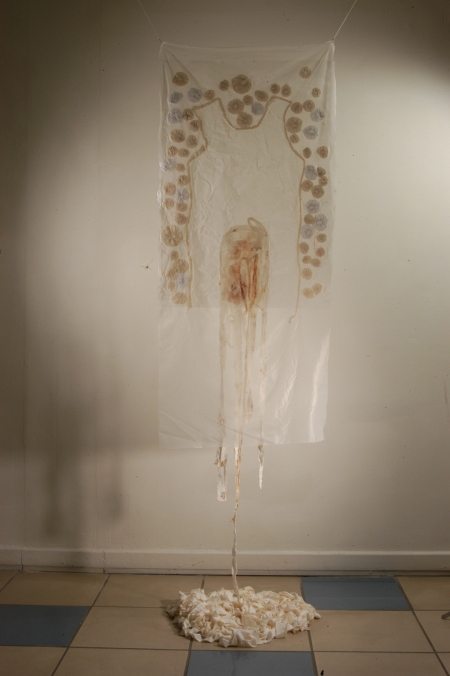 My vagina bleeds too

into poems that will never make their way

into the pot of stew peas my lover’s lips reject

into the unnameable space between

me and a trapped feminine napkin.

It bleeds into the television

when Nigerian girls are stolen

and the missing faces of Jamaican children

hanging in a gallery

follows me home, hangs over my dreams

it is the hood of the Ku Klux Klan

it is the night gown of an Indian bride

of her purity, come morning

it will be draped on the line like the difference

between life and death.

sticks and stones will break my bones

if they rape me, I will unravel

I will not bleed a string of pearls

or cascade into a heap of silk

but I see what you mean,

I will be the ghost