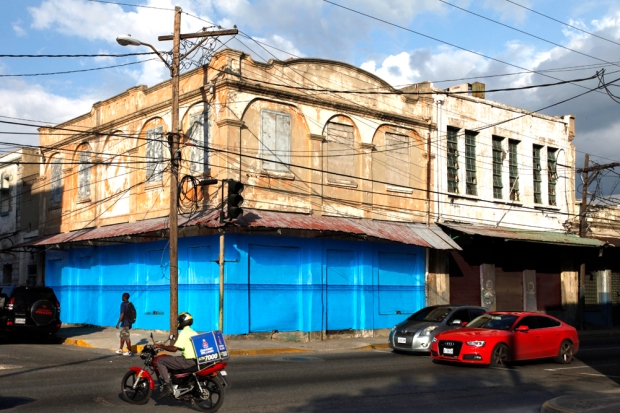 Blue Curry – PARADISE.jpg, at the corner of Orange Street and Port Royal Street

Although the Jamaica Biennial 2014 has now closed, we intend to continue the dialogue. Here is a guest-post by freelance curator and art writer Nicole Smythe-Johnson, who served as project manager for the Biennial and had special responsibility for coordinating projects such as Blue Curry’s.

Bahamian artist Blue Curry flew from London, checking his contribution to the 2014 Jamaica Biennial as luggage. Almost 300 feet of wall poster, divided into sections of 8 by 10 feet were packaged in two large rolls and encased in cardboard. Even though the National Gallery had provided the artist with a letter explaining the nature of the work, and the fact that the piece would not to be returned to London after the exhibition (only because it would be destroyed by then), the customs officer was unconvinced.

As the person meeting Blue on behalf of the gallery, I was called into the customs hall to explain how exactly these were artworks and not advertisements, and why the giant rolls of poster were of “no commercial value”. I did my best, but after 15 or 20 minutes of trying to satisfy her philosophical and functional queries, I began to worry that we would have to leave the posters at customs that night, while the officials figured out what code should apply to this as yet unheard of class of object; artwork of “no commercial value”.

As a last ditch effort, Blue offered to show the officials a mock-up of the poster that he’d printed on a letter-size sheet. He handed the print over, a simple rectangle of gradated blue. The customs officer looked at us as if she wanted to say “yu tink mi born yesterday?”, but instead she said “all of that is just this?”

We left the airport shortly after, with the posters in our possession. Seeing that innocuous blue rectangle seemed to drain the fight out of the official. Surely something that simple wasn’t worth arguing over, it certainly didn’t look like it was worth much.

This has been a recurring theme with PARADISE.jpg. People ask the same question over and over: “But what is it?” As Blue and his motley crew of volunteer assistants (themselves young artists and art students) went from site to site, slathering wallpaper glue on abandoned buildings and painstakingly moulding the poster to crumbling facades, people came from everywhere to ponder the strange image. Some thought it was preparation for something else, “are you going to paint it?” Others approved of the intervention, “yeh man, pretty up di place.” Even if they weren’t sure what it was, “likkle colour.” Several offered advice: “Yu nu si se dat nu do good?” or “Wha kinna glue dat? Dem foreign glue naa go work pon dem dutty wall.” The public installation sessions became a little game, what input will be offered next?

Blue Curry and crew at work on PARADISE.jpg

Blue first exhibited the image that became PARADISE.jpg as a part of an installation at Vitrine Gallery in London in September 2014. There, the poster stretched across the gallery’s store-front windows, a backdrop for sculptures comprised of interlocking hair combs collected in Barbados and India that seem to float on their plexiglass stands. In an interview with Varala Maraj, the artist traces the piece’s origins:

The image is one that I have culled from the internet as a low resolution jpeg that was blown up to make it into a wall poster.  It may have originally been taken in an identifiable place but after undergoing a great deal of manipulation to remove all traces of civilisation it is now just an infinite horizon over the ocean.  It is the sort of blank canvas than anyone can now imagine their tropical fantasies through – whether that is the marketer framing their product with it or the person who has this as a desktop image on their computer.  It’s a generic image of paradise but an impossible paradise and one that as you get closer to it is noticeably un-sharp and of compromised quality.[1]

Since it was in the store-front, the work was open to the public 24-7. Blue welcomed the access to new audiences:

Ninety-nine percent of people won’t enter the traditional white cube gallery space to see your work because they feel intimidated. So here, people consume it as they walk by, they can stop and they can look, study it as they talk on their phones or smoke cigarettes, they can visit several times and there’s no intimidation.[2]

PARADISE.jpg follows on these threads. That digitized seascape provided one kind of contrast to the urban space of London. London is one of those places from which people flee in search of that tropical fantasy of un-touched seascape, but what happens when the image is returned to one of those places it is meant to represent? What happens when this fantasy seascape, pixelated and crumbling from its digital travels, returns home to the derelict buildings of downtown Kingston? There is a seascape downtown, but a very different kind. The work begs the question: are the two connected? What is the relationship between this marketer’s tool, this sign of “Caribbean”, and the real Caribbean place it finds itself in? This Caribbean place with real Caribbean dirt, and real Caribbean people who sometimes tear off pieces or smear matter across it, and sometimes repair damaged spots because they like “beautifying” the area. This Caribbean place that is right now engaged in heated debates about the nature of its “brand”? And in a different thread, the kinds of questions posed by our exchange with the custom’s officer.

This is how Blue Curry’s work functions; whether it’s an installation like PARADISE.jpg or Like Taking Sand to the Beach (2006), a live video feed like S.S.s.(2014), or a piece of sculpture. In “Blue Curry: Art, Image and Objecthood”, art historian Erica James notes that: “As one settles on an understanding of Curry’s sculptures, they often respond with a quiet ‘no’ or ‘not quite.’ Just as the works appear to reveal meaning, they recede from fixed comprehension. However, they are not opaque or esoteric, but elusive.” (emphasis original)[3] Curry’s work is not hard to read, it’s just saying so much. Not in a jumble either, in discernible threads, neatly braided into a singular work.

In 2011, Hyperallergic asked five arts practicioners to pick out some of those threads by “Decod[ing] Blue Curry’s Ambiguous Sculptures”. Rocío Aranda-Alvarado, curator at Manhattan’s El Museo del Barrio had this to say, ”Blue Curry’s objects present woven narratives that are the result of perception, coincidence and subjectivity. Blue is primarily interested in the viewer’s own relationship to each object and what his/her gaze might reveal.”[4] Though these quotes are in reference to Curry’s sculptures, PARADISE.jpg operates in a similar way. 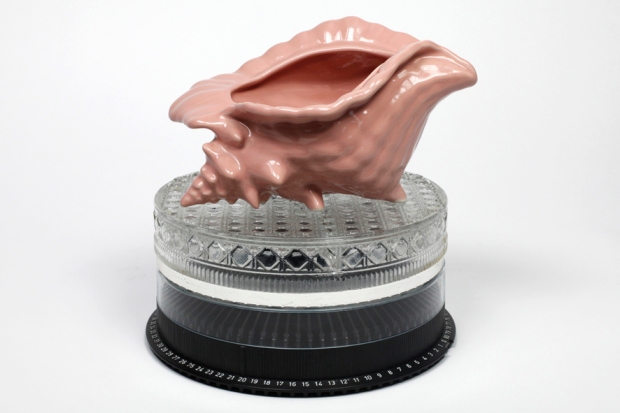 The sculptures bring together apparently disparate items, and re-deploy them in a way that opens a whole new field of meaning through the relationship between the components. PARADISE.jpg does the same with a low-quality image of a seascape presented as a large-scale public intervention that derives its beauty from the encounter it stages between (i) the hyper-tropical image, (ii) printed on the industrial grade poster, pasted on (iii) the walls of the simultaneously urban and seaside streets of downtown Kingston. All this means something, but it’s hard to pin down. Each component- the material, the city, the image, the architecture and the buildings themselves- carries its own narrative, and each viewer weaves them together (to borrow Aranda-Alvarado’s turn of phrase) in a way that is as informed by their particular way of seeing, as what is seen. 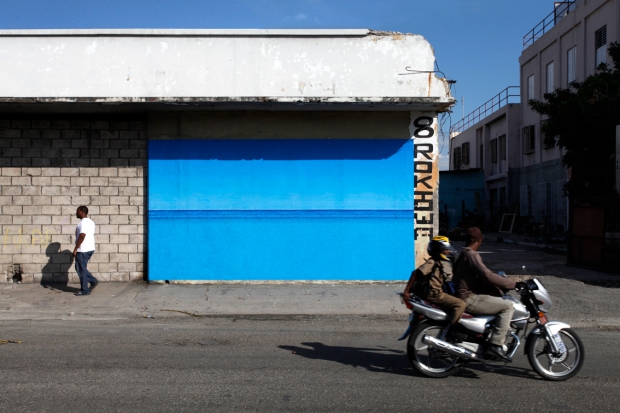 Curry has said of his work, “I don’t want to direct people to understand anything in particular from this work [Souvenir] or any of my work in any way. I still feel that the best artworks leave lots of blanks, which the audience is left to fill…”[5] Within the context of the Kingston art world’s recent flirtation with street art, PARADISE.jpg brings something new to the table. This is not street art that comes with a message. Instead, this piece elicits some questions. Questions that are especially worth asking in this era of “branding” and “restoration”.

(Photographs Courtesy of the Artist)

2 thoughts on “When Images Come Home to Roost: Notes on Blue Curry’s PARADISE.jpg”