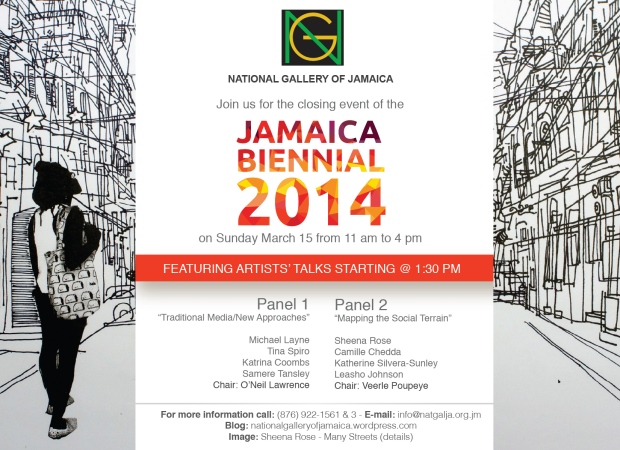 The Jamaica Biennial 2014 is scheduled to close on Sunday, March 15, and to mark the occasion the National Gallery of Jamaica will exceptionally be open from 11 am to 4 pm on that day. A special programme of Artists’ Talks will be presented on that day, starting at 1:30 pm. Admission to the National Gallery of Jamaica and the Artists’ Talks will be free but contributions to our donations box are much appreciated and help to fund exhibitions and programmes such as the Biennial and our Sunday programming.

The Jamaica Biennial 2014 has been a landmark exhibition in several respects and has received significant critical acclaim, in the media and from visitors. Rebranded from what used to be the National Biennial, the Jamaica Biennial 2014 was re-conceptualized to have a more international outlook and to engage local and international audiences more effectively. It is the first Biennial to be judged by international curators – Sara Hermann from the Dominican Republic and Diana Nawi from the Perez Art museum in Miami. It is also the first to include non-Jamaican artists, Blue Curry (Bahamas), James Cooper (Bermuda), Gilles Elie-dit-Cosaque (Martinique), Sheena Rose (Barbados), Richard Mark Rawlins (Trinidad), who were invited to participate in the Special Projects section of the exhibition, along with the Jamaican-born Renee Cox. In another first, the Biennial is shown at more than one location: in addition to the main exhibition at the National Gallery itself, this includes Devon House, which features work by Greg Bailey, James Cooper, Laura Facey, Ebony G. Patterson, Oneika Russell, and Cosmo Whyte, and National Gallery West in Montego Bay, which features work from the Sacred Geometry series by Renee Cox. One special project, PARADISE.jpg by Blue Curry, consists of an intervention on the facades of several buildings in Downtown Kingston. Sunday, March 15, represents the last opportunity to see the Jamaica Biennial 2014 in its entirety.

The Jamaica Biennial 2014 is one of the largest exhibitions in the National Gallery’s history and it is arguably its most diverse exhibition to date. This diversity is reflected in the artists who have been invited to participate in the Artists’ Talks, which are divided into two panels. Panel 1, which is presented under the theme “Traditional Media/New Approaches,” explores how artists use traditional media and styles such as representational painting, ceramics and fibre art to produce work that has significant cultural and aesthetic currency in the present moment. This panel features Michael Layne, Tina Spiro, Katrina Coombs, and Samere Tansley and will be chaired by National Gallery Senior Curator O’Neil Lawrence. Panel 2, titled “Mapping the Social Terrain,” explores how artists engage with the social environment and the social and political issues of the 21st century in new, experimental media. This second panel features Sheena Rose, who is visiting Jamaica for the occasion, as well as Camille Chedda, Katherine Silvera-Sunley and Leasho Johnson and will be chaired by Executive Director Veerle Poupeye. Each artist will make a short presentation on their work in the Biennial and its context, followed by an open discussion at the end of each panel.

We are also pleased to advise that the Sacred Geometry exhibition by Renee Cox at National Gallery West has been extended to April 30, 2015. Opening hours at the Montego Bay Cultural Centre, which houses National Gallery West, are: Tuesday to Sundays 10 am to 6 pm and admission is as follows: overseas visitors: US$ 6; local residents: $ 300; children under 12: free.