Here is the third and final of a three-part blog post series based on a lecture presented by NGJ Executive Director, Dr Veerle Poupeye, at the Jamaica Music Museum’s Grounation programme of February 16, 2014.

Everald Brown, to turn to my last and main case study, was born in Mado District, deep rural St Ann in 1917 and died in New York City in 2003, where he was visiting with one of his children. In another example of rural to urban migration, Brother Brown, who was a carpenter by trade, and his young wife Jenny moved to West Kingston in 1947. They settled at 82 ½ Spanish Town Road, at a yard which also housed a Zion Revival band and a Kumina community. The 1940s and 50s were a period of Rastafarian ferment in West Kingston and Brother Brown was attracted by the teachings of Joseph Hibbert, a pioneering exponent who emphasized the mystical, religious aspects of Rastafari. Like many religious Rastafari, Brother Brown found inspiration in the Ethiopian Orthodox Church, as the authentic Christian church from the African Zion and around 1960 Brother Brown established an informal mission of the EOC, which he named the Assembly of the Living. Brother Brown and his family were baptised in the Ethiopian Orthodox Church when this denomination was formally established in Jamaica in 1970 and he was initially an active member, who for instance constructed the EOC cathedral’s Ark of the Covenant, but his beliefs and practices were far from orthodox, and combined elements of Rastafari, Revival, Kumina, and Freemasonry – all of which are also evident in his artistic work. The question thus arises whether Brother Brown can be labelled as a Rastafarian artist. As I wrote in the 2004 Everald Brown retrospective catalogue:

I believe that to insist that Brother Brown was a Rastafarian artist, in any narrow sense, would be as short-sighted and incorrect as to suggest that he wasn’t. First of all, it is inappropriate to impose any narrow, rigid definitions on Rastafari itself, a religious and political belief system that is, except for a few groups, devoid of the dogmatism that characterizes organized religion and allows for significant personal interpretation. While many Rastafarians have been critical of traditional Afro-Jamaican religious and magical beliefs and practices, especially Obeah, there is in fact considerable cultural and religious continuity between Rastafari and Revival and Kumina. Furthermore, religious Rastafari does not necessarily exist in opposition to Christianity but often incorporates it, hence the attraction to elements of the Ethiopian Orthodox Church. Inevitably, there are tensions and contradictions in such syncretic beliefs—the Ethiopian Orthodox Church, for instance, does not recognize the divinity of Haile Selassie I and no doubt takes a dim view of Jamaican spiritualism—but these are an integral and legitimate part of cultural and ideological dynamics of these beliefs. It is therefore more productive to think of Jamaican Rastafarian culture as a broad, fluid and open-ended cultural spectrum or sphere, which overlaps and interacts with other local and transnational cultural spheres, such as those of the traditional Afro-Jamaican religions. If approached from that perspective, it becomes a lot less problematic to define Brother Brown’s work as ‘Rastafarian art.’

Brother Brown’s small, self-built church on Spanish Town Road was decorated with paintings and Brown also produced various ritual objects and musical instruments which were used by his church community, which consisted mainly of his own extended family. He was discovered as an artist in the late 1960s, by Janet Grant-Woodham, who was Folklore Research Officer at the Institute of Jamaica, and some of the radical young intellectuals at the University of the West Indies, such as Timothy Callender, Edward Kamau Brathwaite and Eleanor Wint, who brokered his first exhibition at the Creative Arts Centre in 1969. Brother Brown started exhibiting regularly since then, in the 1970s often jointly with his young son Clinton Brown, who also painted and produced musical instruments.

Everald Brown surrounded by his work at the Assembly of the Living, c1971

Brother Brown and his family were all actively involved in making music, as part of their church community’s worship and for social occasions, and this was poignantly captured in a series of photographs by the English photojournalist Penny Tweedie, which were commissioned in 1971 by the Jamaica Tourist Board. The young Margaret Reckord-Bernal was part of the team that brokered this project and her vivid description of her early visits to the Browns is worth quoting at some length:

With an air of quiet custom, the children took up their instruments. Sister Jenny, in regal tie head swept the space with silent authoritative glances […], watching to see the assembly in proper order.  Brother Brown, the producer-extraordinaire of the musical event, moved around the room, welcoming his various guests. He was always eager to share the meaning of the rituals there enacted, and with a passionate, engaging manner would explain: ‘Archangel Gabriel, there he is! The Guardian of the Gate… The stone church of Lalibella, I saw them in a dream-journey, the priests, the rituals, the musical instruments, there is where I saw my Dove Guitar… Listen! It’s the story of the Victory of St Michael… And then in a high clear voice, Brother Brown would make the Call:  ‘Here we come now The Glory–I Band Amen, Alleluia!’ And the drums would respond!

The centrality of music to the Browns’ life is also illustrated by his early work, for instance this circa 1960 painting of the Archangel Gabriel – one of four paintings at his church that each depicted one of the Archangels, who sounded the trumpet for the small, flag-carrying stick people to rush from the four corners of the earth towards the centrally positioned Assembly of the Living from the four corners of the earth – a good example of the sound-laden symbolic language used by Brown. Another painting in this series can be seen in the background of one of Penny Tweedie’s photographs. Several early works depict his own family performing on the musical instruments he produced, such as Ethiopian Apple (1970), which was used as the flyer image for Grounation, and Niabinghi Hour (1969).

Everald Brown and his church band, c1971 (Brother Brown is at the bottom left)

Concerned about the increase in crime and violence in West Kingston and disenchanted with the officialdom of the Ethiopian Orthodox Church, Brother Brown in 1974 moved his family and his church to Murray Mountain, where he lived for the rest of his life and you see on screen the sign he produced for his new church, c1975. The spectacular natural environment of deep rural St Ann provided him with a new source of mystical inspiration, as we already saw in Bush Have Ears, the painting we listened to” at the start of this lecture. Music and sound continued to pervade his work, however, as can for instance be seen in Talking Drum (1975), which speaks about the mystical power of the drum, in this case to bring nourishing rain to the water-starved community.

I will conclude with a closer look at the musical instruments that were produced by Brother Brown and his family – a tradition which continues to the present day, twelve years after his death. In addition to a variety of sizes and types of drums, Brother Brown also produced various types of string instruments – dove harps (more correctly, a type of lute or guitar), star banjo, and one string bass. The shapes and decoration of his early instruments were relatively simple but they gradually got more complex, culminating in the hybrid Instrument for Four People (1986), which combines a harp, dove harp, drum and rhumba box and of which he later created several more versions. While these beautiful, at times truly spectacular instruments were actively used by the family, they predictably also did well in the art market, where they outstripped Brown’s paintings and occasional sculptures.

As a carpenter, Brother Brown was technically well equipped to produce his instruments and he claimed that the types and numbers produced derives from mystical inspiration, obtained during his dream-journeys. While in many indeed ways unique, Brother Brown’s instruments also derive from traditional African-Jamaican types and this not only pertains to the obvious instance of the drums but also to the string instruments, which have a long history in Jamaica, as was already documented in the late 17th century by Hans Sloane. A sketch by Brother Brown from 1988 for a new type of string instrument, based on a calabash form, may at first seem exceptional but is on closer scrutiny related to African calabash harp types, such as the Kora or the Bolon from West Africa and may at least in part derive from these traditional forms. Brown’s instrument types also bear comparison to Ethiopian types, such as masenqo and the krar. These similarities require further research but I will leave that task to the musicologists.

The Brown family continues to make music today and visitors to the house are often treated to a performance – an unforgettable, physically stirring and deeply moving experience on that mystical Murray Mountain hilltop. I will leave you with two photographs of a performance I witnessed in 2004, two years after Brother Brown’s passing, when I was preparing for his retrospective. 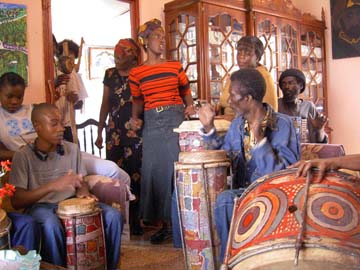 One thought on “SOUND AND VISION: MUSIC AND SOUND IN THE WORK OF KAPO, EVERALD BROWN AND WOODY JOSEPH – Part III”