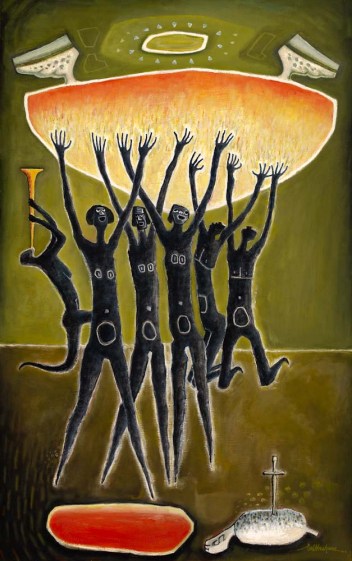 Here is the second text panel for the Explorations II: Religion and Spirituality exhibition:

Religion and spirituality play a pervasive role in virtually all aspects of Jamaican history and life and are, not surprising, a prominent theme and source of inspiration in Jamaican art. While predominantly Christian, with a large number of traditional and non-traditional denominations, Jamaica is also the birthplace of Rastafari and earlier African-derived forms – Revival and Kumina being two of the most well-known.  Other world religions are also represented in Jamaica, namely Judaism, Hinduism and the Islam, as small but at times influential minorities, and there are also traditional and new spiritual beliefs and practices that do not fit any of these labels.

Religion has at times served as an instrument of social control and oppression, especially during the colonial period, but the diverse religious and spiritual practices found in Jamaica have also served as potent tools for liberation and self-assertion. These counterhegemonic roles have greatly contributed to the richness, diversity and ideological assertiveness of the associated cultural production, as is most evident in Jamaican music but also in dance and in the visual culture. Visual expressions have been an integral part of many religious and spiritual practices on the island and this has in itself produced some of the most outstanding examples of Jamaican art. The work of artists such as Mallica ‘Kapo’ Reynolds and Everald Brown was, for instance, directly linked to their role as religious leaders, in Zion Revival and religious Rastafari, respectively, and included the production of sacred objects and images.

Much of the art in this exhibition was intended as religious art by its makers and includes some of its main exponents – such as Kapo, Osmond Watson, Carl Abrahams and Everald Brown – but most of these artists have also been drawn to the subjects of religion and spirituality from a more secular point of view, for instance as part of the search for iconic Jamaican subject matter. The exhibition also includes examples of work that uses religious iconography as a metaphor to address other non-religious issues, whether personal or social. Eugene Hyde’s Good Friday (1978), for instance, was part of his Casualties series, which provided a scathing commentary on the socio-political turmoil of the late 1970s and its devastating effects on the disempowered in society.

Given the hegemonic and counter-hegemonic roles of religions and spirituality in Jamaican history and life, it is indeed impossible to separate religious, spiritual and secular concerns and much of the art in this exhibition is deeply political, in that it questions and actively challenges racial hierarchies and power dynamics. Religion and its strictures, practices and social implications have been critiqued by certain artists and sometimes provocatively so. One such example is the work of Omari Ra, who has consistently questioned what he views as the oppressive nature of conventional, “white” religion by combining religious imagery with representations of weaponry, aggressive caricature, and inflammatory graffiti. Others have brought a less politicized satirical perspective to the subject, such as the irreverent portrayals of religious histrionics in Carl Abrahams’ Hallelujah, Hallelujah, Hallelujah (c1965), Backyard Preacher (c1975) and, to some extent, also in the Visionary World of Marcus Garvey (1976), although it should be noted that the same artist has also produced some of the most moving and deeply felt religious works in the exhibition.