The NGJ regrets the passing of the sculptor Peter Ralph Johnson. He was born on April 4, 1960 and most recently lived at 17 James Street, in downtown Kingston, where he operated his sculpture workshop.

Johnson was essentially self-taught as an artist, although he attended some leisure classes at the Edna Manley College. He also worked in the studio of artists such as Fitz Harrack and Judith Salmon. He collaborated with the Jamaica Cultural Development Commission for many years, mounting exhibitions and doing set, costume design and restoring antiques. He also worked with Mutual Gallery, Gallery Pegasus and Grosvenor, mainly assisting with the mounting of exhibitions. He was a regular participant in the National Visual Arts Competition and Exhibition and was awarded bronze medals in 1982 1993 and 1996 and he had also exhibited at the NGJ in 2012 National Biennial. Johnson exhibited at various other galleries, including the Grosvenor Gallery and Gallery Pegasus. Most recently he was collaborating with the children’s workshops organized by OAaSIS International in downtown Kingston. 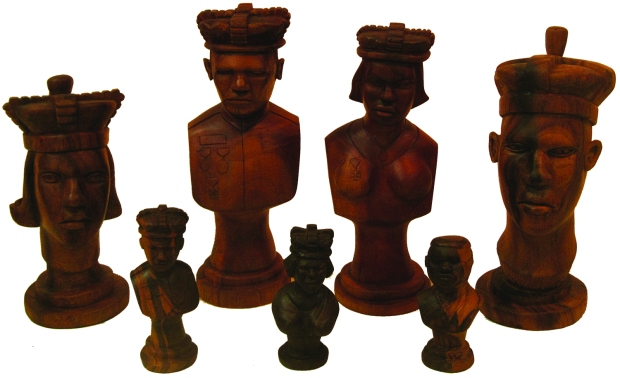 As a sculptor, Peter Johnson worked mainly in stone, especially alabaster, but occasionally also in wood. His sculpted a variety of subjects, including portrait heads and religious figures but the most outstanding examples reflected a droll, fantastic imagination, as could be seen in the gargoyle-like Want Freedom (2012) he exhibited in the 2012 National Biennial and The Royal Visit (2012), a satirical depiction of various royal figures in the form of a chess set, which was shown in the 2012 National Visual Arts Competition and Exhibition.

The NGJ extends sincere condolences to the family and friends of the late Peter Johnson.