Matthew McCarty – I Took the Liberty of Designing One (2013)

Instead of asking what are people’s roots, we ought to think about what are their routes, the different points by which they have come to be now they are, in a sense, the sum of those differences. That, I think, is a different way of speaking than talking about multiple personalities or multiple identities as if they don’t have any relation to one another or that they are purely intentional. These routes hold us in places, but what they don’t do is hold us in the same place. We need to try to make sense of the connections with where we think we were then as compared to where we are now. That is what biography or the unfolding sense of the self or the stories we tell ourselves or the autobiographies we write are meant to do, to convince ourselves that these are not a series of leaps in the dark that we took, but they did have some logic, though it’s not the logic of time or cause or sequence. But there is a logic of connected meaning.

The New Roots exhibition features 10 emerging artists: Deborah Anzinger, Varun Baker, Camille Chedda, Gisele Gardner, Matthew McCarthy, Olivia McGilchrist, Astro Saulter, Nile Saulter, Ikem Smith and The Girl and the Magpie. These artists were selected by our curatorial team, which was headed by Nicole Smythe-Johnson, O’Neil Lawrence and myself, from our initial shortlist of over 30 artists under 40 years old who were either born in Jamaica or of Jamaican parentage or who are active here. We specifically looked for artists who had started exhibiting only recently, at least in Jamaica, and who had not previously been represented in National Gallery of Jamaica exhibitions of a similar nature, such as our Young Talent series. Final selections were made based on obvious practical considerations, such as the availability of work and feasibility of project proposals, but most of all we looked for work that suggested viable new directions in local contemporary art practice. And we found a lot that interested us: a strong focus on photographic reportage; provocative autobiographic reflections and social interventions; new interrogations of gender and the body; an at times unsparing realism but also a capacity for imaginative visual poetry; experimentation with video projection, animation and interactivity; and a growing disregard for conventional notions about the “art object” and the traditional, segregated artistic disciplines.

The Girl and the Magpie – Sponge (necklace, collection Fragile Jamaica) (2013) – work in progress

Most of these developments were already evident in Young Talent V three years ago but the mood of the two exhibitions is very different: Young Talent V exuded an almost brazen confidence and energy while the work in New Roots is more muted and self-reflexive and also more engaged with social activism – a result, no doubt, of the different artistic personalities involved but also of shifts in the cultural environment. [Note: I had written this catalogue introduction before the exhibition was mounted – having seen Matthew McCarthy’s site-specific installation now, I have to second-guess myself on calling this exhibition “more muted”, but the claim does apply to the other artists] 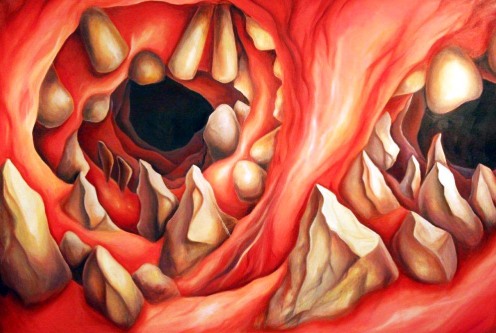 New Roots is consistent with the National Gallery’s mandate to serve as a platform for the development of Jamaican art and this involves identifying and supporting new and young artists through our exhibitions and programmes (and the programming for New Roots will include professional development workshops for young artists which will be held at the start of the new school year). The exhibition builds conceptually on the Young Talent series, which has been our main vehicle for supporting young artists over the years: the first Young Talent exhibition was held in 1985 and the most recent edition was held in 2010, when we mounted the critically acclaimed Young Talent V, which launched a new generation of contemporary artists such as Ebony G. Patterson, Marlon James, Leasho Johnson and Marvin Bartley. We opted not to present the current exhibition as part of the Young Talent series however because of several noteworthy departures from the original exhibition concept. While the Young Talent exhibitions have focused on examining the developmental trajectory of promising young artists, the artists in New Roots are each represented with a specific body of work that is either new or recently created and this allows for a stronger, more focused statement to be made than an overview of their development to date would have permitted. And while Young Talent looked at each artist in isolation, to establish their individual merit and promise, New Roots more actively considers the participants’ commonalities and contexts along with the broader cultural significance of their work.

Initially, we were not deliberately looking for common themes but they emerged quite forcefully while we were reviewing portfolios, in ways that urged us to reflect on the current cultural moment. This should not surprise, since we live in a world in crisis, globally and locally, characterized by sustained economic recession, violent conflicts and colliding world views, environmental degradation, and tremendous social, cultural and technological change. This crisis is deeply unsettling, since it has removed many certainties that were previously taken for granted, but new possibilities are emerging in the process, for instance the new global awareness, connections and public empowerment that have accompanied the advent of social media. In this new and rapidly evolving context, cultural producers can find – and have already found – a new sense of purpose, as cultural critics and activists, and this is strongly evident in New Roots. The works in the exhibition are provocative and certainly ask uncomfortable questions yet there is no overwhelming sense of dystopia and the exhibition reflects a new willingness on the part of the artists to intervene actively into their social environment, in a way that reflects genuine social responsibility, independent and incisive critical perspectives, empathy and respect for others, and a liberating, often satirical imagination. Instead of searching for new certainties, the work in New Roots also illustrates the artists’ willingness to embrace the new uncertainties and fragilities, at the personal and the collective level, and to find a new, more mutable and questioning sense of self in this context. It is for this reason that Stuart Hall’s “routes” over “roots” argument was referenced in the epigraph of this introduction, in a quote which almost perfectly captures the spirit of this exhibition. 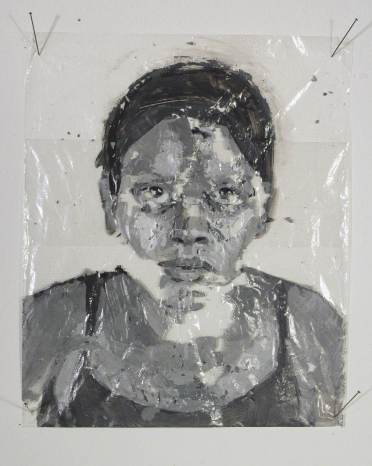 The exhibition title New Roots was in actuality inspired by a body of work by photographer Berette Macaulay which we had shortlisted for the exhibition but which was not included because of practical constraints. The series of photographs, titled Neue Rootz, consists of haunting group portraits of Macaulay’s multiracial and multinational family. We felt that the title and concept was somehow applicable to the entire exhibition so we decided to adapt the title, adding to its ironic intent because, if anything, the New Roots exhibition illustrates how far contemporary art has moved from the search for identifiable and secure “roots” and, for that matter, “Jamaican-ness” that was part of the early postcolonial cultural orthodoxies in the 1960s and 70s.  While Jamaica has a strong, globally recognized cultural profile, what can be termed as “Jamaican culture” and “Jamaican art” has become increasingly open-ended, to the point where it is almost untenable to use such labels to describe contemporary art practice in and related to Jamaica. This may create unease among those who crave clear, didactic labels but it is a reflection of contemporary cultural realities and it certainly does not present any obstacles to the artists in the exhibition, who freely and critically engage with this new fluidity and cosmopolitanism but also feel at ease with asserting their perspectives on the various “new Jamaicas” with which they may identify. 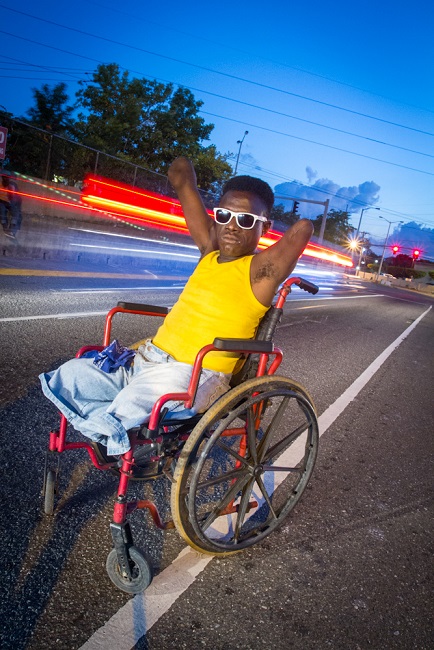 In this context, it is fortuitous that New Roots is staged at the end of the year-long Jamaica 50 observations – a moment that calls for critical reflection on how culture and nationhood have been construed and deconstructed since Independence and it is tempting to examine some of the work in the exhibition in that light. Ikem Smith’s music animation 2063, for instance, literally asks the question what life in Jamaica will be like for young black men like himself 50 years from now, and ends on a grim note. In Matthew McCarthy’s satirical interpretation of the Coat of Arms, the iconic Taino couple has been replaced by a couple of symbolic street artists – Nanny with abeng and paint brush on the left and a “ragamuffin” with paint roll on the right – who together fend off the “Johncrows” that threaten Jamaican society, including one particularly large bird of prey explicitly associated with the IMF, and poignantly represent his concept of the artist as social activist.  McCarthy’s satirical play on national symbols and mottos is also evident in his “Out of Many One Is Tru but Only a Few on Page 2” street sign that was actually mounted on Kingston’s streets as part of his New Jamaica campaign earlier this year and, in an ironic twist, actually “made it” to the Observer’s Page Two, even though McCarthy’s intervention actively questioned how social hierarchies are created and maintained by such social recognition mechanisms.

And in a more aestheticized and poetic vein, such critical reflection is also evident in jeweller The Girl and the Magpie’s Fragile Jamaica series, which speaks to Jamaica’s natural beauty and ecological vulnerability, and Olivia McGilchrist’s Native Girl video installation, which offers a contemporary interpretation of Jamaican folklore that “flips the script” on how national identity and, especially, Jamaican womanhood have been understood, seen from the perspective of a “white” Jamaican woman, of Jamaican and French parentage, who was born in the island but grew up in France and England and recently returned to live here.

As McCarthy and Smith’s work also illustrates, the streets of Kingston are prominently present in New Roots, as a subject and a site of intervention, in a way that poignantly illustrates the role of Kingston as Jamaica’s  social and cultural crucible. Two of the artists selected, Varun Baker and Nile Saulter, opted to document the lives of iconic figures on those streets: a pillow vendor who embodies the spirit of popular entrepreneurship and brings comfort to those who buy his wares and a wheelchair-bound victim of a serious accident with a hopeful story of rehabilitation and empowerment in the face of extreme adversity. In doing so, they not only recognize and assert the personhood of those in Jamaican society who may be very visible but usually remain anonymous and voiceless, thus challenging Jamaica’s entrenched social boundaries, but they also interrogate the relationship between artist and subject, which expresses a level of self-reflexivity that was not previously evident in local art practice. 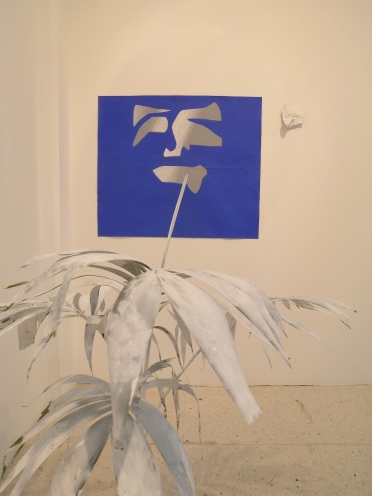 We have been very inspired by the work in New Roots and the new cultural spirit it represents and hope that our viewers will be equally inspired. To this end, we also invite you to read the artists’ and curators’ statements in this catalogue and on our blog, which shed further light on the artists’ intentions and the bodies of work selected, and to share with us your responses, whether via social media or in person, thus starting a productive critical dialogue between the artists, the Gallery and our viewers.

A Conversation with Stuart Hall. The Journal of the International Institute, Michigan University, Vol. 7, No. 1, 1999.