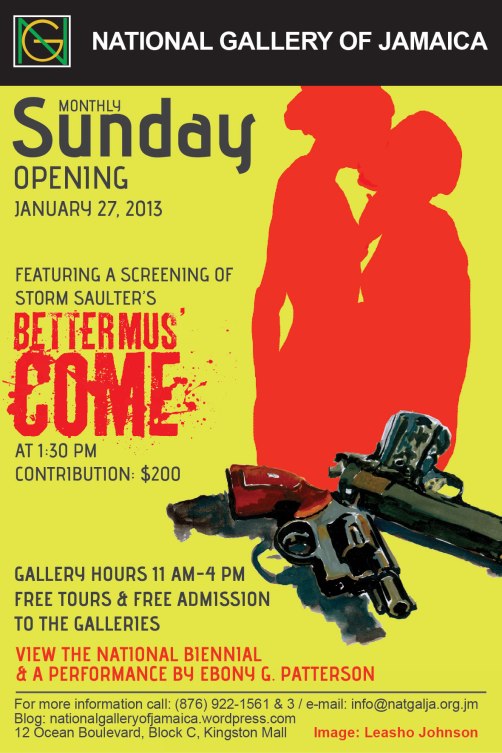 The NGJ is continuing its Last Sundays programme, whereby it is open every last Sunday of the month, in addition to its regular opening hours, and will thus be open to the public on January 24, 2013, from 11 am to 4 pm.

As a special feature, the NGJ will be screening of the Jamaican feature film Better Mus’ Come (2010), which will start at 1:30 pm. Better Mus’ Come is a dramatic love story framed by a fictionalized account of the political violence of the 1970s in Jamaica. Directed by Storm Saulter and written by Joshua Bratter, Paul Bucknor, and Storm Saulter, the film has received significant acclaim and received the Best Feature Awards at Trinidad & Tobago Film Festival and Bahamas International Film Festival, the Best Director Award at the Pan-African Film Festival, and the Best Actor Award at American Black Film Festival. The film has also screened at the Toronto International Film Festival, the Film Society of Lincoln Center and the British Film Institute. The African-American Film Festival Releasing Movement (AFFRM) recently announced the launch of its new label, ARRAY, dedicated to multi-platform distribution of black independent film and the label’s first acquisition is Better Mus’ Come, for all US distribution rights.

Visitors will also be able to view the 2012 National Biennial, a special performance piece by Ebony G. Patterson and the NGJ’s permanent exhibitions. Storm Saulter is in one of 86 artists represented in the Biennial.

As has become customary on Last Sundays, general admission and tours are free on that day. The film screening attracts a contribution of $ 200 per person and seating is limited to 80 persons in all, to be admitted on a “first come and first served’ basis. Tickets for the film can be purchased in advance from the NGJ – please call 922-1561 for more information.