Born May 1, 1919, in Castleton, St Mary, Jamaica, and died September 18, 1998, William “Woody” Joseph was one of modern Jamaica’s most original artists, although his work was firmly rooted in African-Jamaican religious and cultural traditions.

Woody was self-taught and started carving around 1965 or, as he put it, “two years after [hurricane] Flora”. He recounted:

I was farming … yam, banana, cocoa, thyme, cane, dasheen, potato … farming to get the food from the bushes … didn’t have no dependents to work the field wid me … and one day, I tek sick, the two legs cripple. Couldn’t walk, couldn’t stand up, couldn’t lay down … I go to the river-side and was praying. When mi was praying, I see a piece of wood coming down in de water … I see the piece of wood swimming in the water to mi. I tek it up….and form a bird. 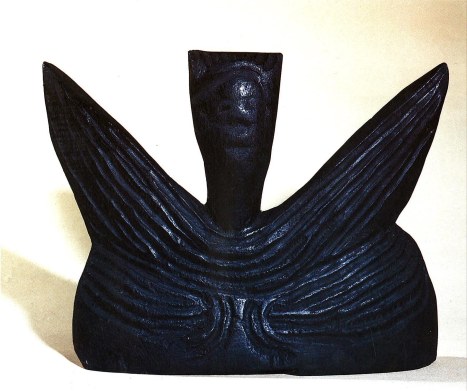 His carvings, most of which were made from cedar root, first came to the attention of the art world in 1978 when two young Jamaican artists, Stanley Barnes and Eric Cadien, came across Woody at work while on a walk along a river bank near Stony Hill. Woody remembered:

Stanley Barnes and Eric Cadien come to mi river to bathe and buy orange one morning. I was working on a piece of wood … when dem see it, dem didn’t bother wid de orange dem again…

Barnes and Cadien were impressed by the unique expressive power of Woody’s carvings and offered him an exhibition at the Paisley Gallery in Stony Hill, which they were operating at that time. This exhibition brought Woody to the attention of the Jamaican art world and the NGJ’s then Director/Curator, Dr David Boxer, included him in the landmark Intuitive Eye exhibition in 1979, which launched the concept of Intuitive art and provided national and international validation for Jamaica’s self-taught, popular artists. Boxer wrote in the catalogue:

Joseph has almost certainly never seen an African carving or a photograph of one, yet with no Jamaican carver, except Kapo in his earliest works, are we so conscious of the continuation of the creative force of Africa

Woody became a regular participant in exhibitions of Jamaican art, locally and abroad, and he was awarded the Institute of Jamaica’s Bronze Musgrave Medal in 1988. His work is represented in many private collections and is also part of the NGJ Collection.

The collector and researcher Wayne Cox offered the following insights into Woody’s sources and methods, in the catalogue that accompanied a 1999 exhibition of work from his collection at the Fondo del Sol in Washington, DC:

Woody’s figures depicted humans or animals in a strong vocabulary of form of his own invention. Occasionally, he made staffs or bowls. At exhibitions of his work, he wore a cedar hat he carved for himself. Woody ended most conversations with ‘Give thanks and praises’. As with most of Jamaica’s self-taught artist, the spiritual was present in his work; sometimes overtly, sometimes not. He sometimes created figures that were specific to Jamaican spiritual life – rivermaids, angels, spiritual birds and persons with hands clasped in prayer or arms raised in praise.

But carving non-religious subjects was equally spiritual. Carving itself was the way Woody was called to give spiritual service. Carving as a spiritual exercise has roots in Jamaica’s African and Taino forebears. Using a sparse, almost archetypal language, Woody seemed to divine a soulful presence in the figures of ordinary persons and animals he created. …

Woody’s method meant gathering cedar roots for carving, some as small as three or four inches high, some maybe two or three feet high. He dried the wood on a fire, cured it for months. He studied each piece until he “caught” it – saw the final shape in his mind. He usually followed the lines of the natural shape of the piece of wood. He cut enough away to give the form, never overworking the piece, almost never repeating himself. …  After carving, Woody further cured his figures in a barel containing water and a solution leeched form logwood. Next he stained the works either red or black or, more rarely, brown.

Woody’s work received significant critical acclaim. Ferdinand Protzman of the Washington Post for instance wrote in 1999, after seeing work by various Intuitive artists from the Cox collection at the Fondo del Sol:

The figurative cedar carvings by Woody Joseph, who may be the best-known artist in the show … look almost as if they came from West frica – but not quite; there are other aesthetic strains at work. The lines are strong, simple, assured. Some of the figures are vaguely reminiscent of sculptures by European expressionists. Joseph bases his work on real people as well as mythological figures like river maids, and all of them are imbued with a kind of effervescent spirituality that makes them appear to be on the verge of singing, shouting, or simply ascending to Heaven. Sculpture with such spiritual resonance and evocative power is rare in this world. It is produced only by great artists.

This post was compiled from archival material in the NGJ’s Education Department and the Wayne and Myrene Cox Collection, which is gratefully acknowledged.