It is believed that Ras Dizzy was born in 1932 as Birth Livingstone, the date and name stated in his passport, although he also used Birch Lincoln and Dizzy Gillespie Johnson, as well as several other variations on his name. He died in Kingston on April 17, 2008. The following is extracted from the obituary published by the NGJ at that time:

Ras Dizzy first came to public attention in the 1960s as a Rastafarian poet/philosopher, who sold his mimeographed tracts and poems on the University of the West Indies campus, although he was already painting at that time. His writings were regularly featured in the weekly Abeng, which was published in 1969 by members of the young radical intelligentsia associated with UWI. His inclusion in the National Gallery of Jamaica’s seminal The Intuitive Eye exhibition in 1979, established him as a major Intuitive, as the Gallery henceforth called those self-taught artists who had previously been labelled as “primitive” or “naïve.”

Ras Dizzy chose to live outside of the system, as one who had no fixed address and, for that matter, no fixed name. His nomadic wanderings extended outside of Jamaica, among others to Haiti and Panama. While there were moments of significant hardship and even some brushes with the Law, he ultimately lived life on his own terms, as a free spirit. David Boxer, the National Gallery’s Chief Curator, described him as “a man who seemingly lives and paints at the very edge of what we might call sane/rational existence.”

The expressive power of his work indeed derived from his eccentricity. He typically worked in extended series, on select “trademark” subjects. Many of his works are self-images, in the guise of a Wild West sheriff, an outlaw cowboy, a champion boxer or a racetrack jockey. These images are in part delusional but they are also rooted in the local popular culture and reflect a legitimate yearning for personal status and dignity. In the case of the sheriff, they also reflect a desire to restore order and justice to an often chaotic and unjust social environment. 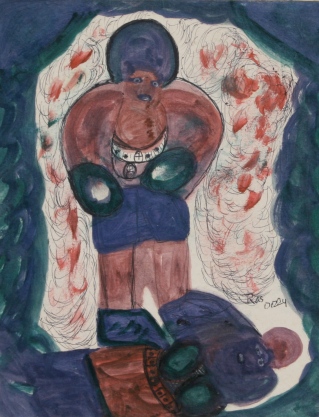 Back of “When I Fighted Scarcie Lewis”

Other works celebrate nature, such as his birds (which probably also allude to his first name), his landscapes and his close-up depictions of palm trees, flowers and fruits, and others still represent common figures in the Jamaican environment, such as his market women. In some instances, his characteristically intense colours and bold brushstrokes took over, resulting in complete abstraction, and he told the American art writer Edward Gomez that these were “pictures of his dreams.” While his writings have received less attention in recent years, painting and poetry were integrated and most of his paintings have poetic writings on the back that elaborate on their content.

Ras Dizzy has exhibited widely in Jamaica and abroad. The National Gallery of Jamaica also included him in the two major surveys of Intuitive art that followed The Intuitive Eye, namely Fifteen Intuitives (1987) and Intuitives III (2005), and several Annual National and National Biennial exhibitions. He was also a regular participant in Harmony Hall’s annual Intuitives exhibitions in Ocho Rios. His overseas exhibitions include: Jamaican Intuitives (1987) at the Commonwealth Institute in London; New World Imagery (1995), an exhibition of contemporary Jamaican art which toured in England, and Redemption Songs (1997 & 2002), an exhibition of work by Jamaican Intuitives which toured in the USA. Ras Dizzy was an extremely prolific painter whose work was very widely collected, often by persons who bought directly from him on his regular rounds through Kingston, the University of the West Indies and other parts of Jamaica. Internationally, his work has, among others, been sold through the Cavin-Morris Gallery in New York City, and the Pan American Art Projects in Miami and Dallas. 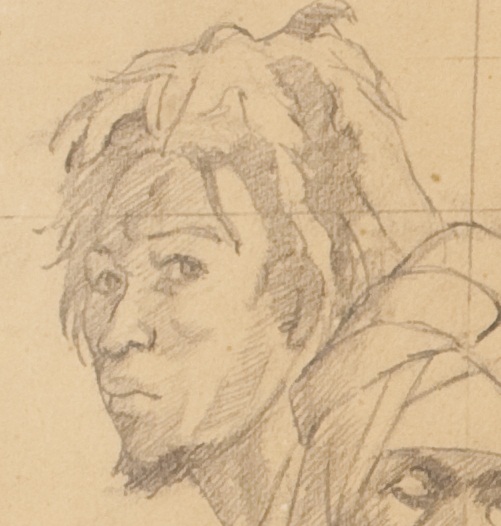 Portrait of Ras Dizzy, detail of study for Out of Many One People (1962) by Barrington Watson

With special thanks to Wayne Cox for his photograph of Ras Dizzy and works from his collection.