The National Gallery of Jamaica is pleased to present Barrington: A Retrospective, an exhibition of more than 250 paintings, drawings and original prints by Jamaican master artist Professor the Hon. Barrington Watson, OJ. The exhibition is scheduled to open on January 8, 2012 and its main part will be on view at the National Gallery until April 14, with smaller annex exhibitions at the Bank of Jamaica and the Olympia International Art Centre, both in Kingston. The guest speaker at the January 8 opening function will be Sir Shridath Ramphal, GCMG, OCC, OE, OM, former Commonwealth Secretary-General and Chancellor of the University of the West Indies. The exhibition is the first on the NGJ’s calendar of events for Jamaica 50.

Born in Hanover, Jamaica, in 1931, Barrington Watson was educated at the Royal College of Art in London and attended several other major European art academies, including the Académie de la Grande Chaumière in Paris and the Rijksacademie in Amsterdam. He returned to Jamaica in 1961 and quickly rose to prominence as one of the most influential artistic figures in post-Independence Jamaica. Along with Eugene Hyde and Karl Parboosingh, he established the Contemporary Jamaican Artists’ Association (1964-1974) and he was the Director of Studies at the Jamaica School of Art, where he introduced the full-time diploma programme. He later also served as visiting professor at Spelman College in Atlanta. Essentially an academic realist, Barrington Watson has explored a wide range of themes and genres in his work, including history painting, genre, portraits and self-portraits, nudes, erotica, the landscape and the still life. He has also executed several major commissions, including the mural The Garden Party (1975) and the installation Trust (1975, with Cecil Baugh) at the Bank of Jamaica, the mural Our Heritage (1974) at Olympia in Kingston and various official portraits, including those of past Prime Ministers of Jamaica, of Martin Luther King (1970) at Spelman College, and of former Commonwealth Secretary-General and UWI Chancellor Sir Shridath Ramphal at the University of the West Indies – Mona (1992) and Marlborough House in London (1995).

Barrington: A Retrospective will provide an in-depth overview of the main thematic and stylistic developments in the work of Barrington Watson and will feature well-known masterpieces from the National Gallery collection, such as Mother and Child, Washer Women, Athlete’s Nightmare, and Conversation, along with works borrowed from major private and corporate collections, several of which have never been exhibited before. The annex exhibition at the Bank of Jamaica will provide a context for The Garden Party, which is on permanent view there while the annex exhibition at Olympia is similarly organized around the mural Our Heritage and also features Barrington’s Pan-Africanists series. 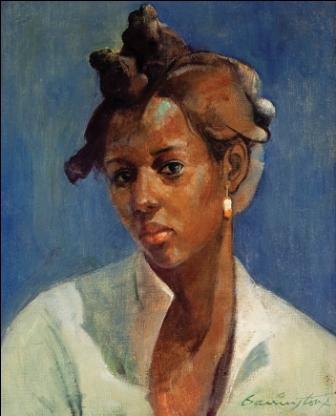 Barrington: A Retrospective is curated by the NGJ Chief Curator David Boxer and guest Curator Claudia Hucke, who is responsible for the annex exhibitions. The NGJ Executive Director Veerle Poupeye and the Education Department are curating the accompanying documentary exhibition and Senior Curator Olivia McGilchrist is producing several short video documentaries on Barrington Watson’s work that will be included in the exhibitions.

The exhibition will be accompanied by a 192-page, colour-illustrated catalogue publication that documents all the works in the retrospective as well as a few other works by Barrington that could not be included and documentary photographs. It includes scholarly essays on various aspects of Barrington’s work by David Boxer, Claudia Hucke and Veerle Poupeye, and a biographical chronology by Tamara Scott-Williams. Tours of the main and annex exhibitions and visits to the Artist’s St Thomas estate, Orange Park, will also be organized. For more information about the exhibition, catalogue publication and tour arrangements please call 922-1561 & -3 or 618-0654; email info@natgalja.org.jm