The Institute of Jamaica recognizes Gaston Tabois for outstanding merit in the field of Art.

Born in Trout Hall, Clarendon in 1924, Tabois’ early years were spent on his parents small farm in the village of Rock River, a few miles from Chapelton, where as an only child he received the full attention of a doting mother who instilled in him a sense of order, discipline and of pride in completing every set task with a maximum of constructive effort. The late Gloria Escoffery, author of a memorable account of Tabois’ journey as an artist, adds other early lessons from his mother:

Today Tabois has his mother to thank not only for the moral
standards she set for him…, but also for the example of those nimble
fingers as they brought to life the intricate designs she embroidered
on the bridal gowns of Rock River belles (…) without realizing that
he was learning, Tabois came to understand the importance of
planning, of careful craftsmanship, of giving thought to the
materials, or ground on which one worked, the tools and medium
one selects for a particular job.

At the elementary school in Rock River, Tabois’ gifts as a draughtsman surfaced and were quickly utilized by the teacher who roped him into the creation of the charts for the class. In 1940 he was sent to Kingston to Tutorial College which he attended until the age of twenty. After graduation, while holding down a variety of jobs, he embarked on a self-education programme where he tackled numerous subjects including Latin, History, Human Physiology and, of course, Art. He taught himself the rudiments of architectural drafting and after years of practicing as a professional he formalized his education in the field, gaining a diploma at the College of Arts Science and Technology in 1968. 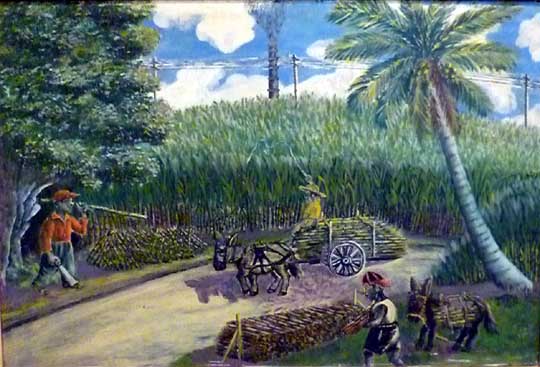 In the meantime however, Tabois the self-taught painter had come to national prominence. By 1955 when he held his first one-man exhibition at the Hill’s Galleries in Kingston, he was being hailed in some quarters as the heir to the acknowledged master of Jamaican “Primitive” painters, John Dunkley. In Jamaica the “International set” took this true “naïf” to its bosom delighted by his joyous depictions of Jamaican landscapes and village life. The label of “Primitive” and later of “Intuitive” however, did not sit well with Mr. Tabois. He wanted to be considered as being in the line of masters like, as he said “Rubens…and the man who painted the Mona Lisa.” So he set about bettering himself by more and more detailed work and more and more careful application of paint. By the time of his 1975 exhibition at the Bolivar Gallery, an announcement from the gallery would state: “Since 1973 Mr. Tabois has dropped his primitive style for professional realism.” The “new” style that emerged would be a disappointment for some, but his integrity and obvious devotion to the determined muse of “Realism” won him many new admirers. For them it is his pre-occupation with details, lovingly depicted that gives the later work its special charm.

Tabois is one of a mere handful of artists who exhibited in all three editions of the National Gallery of Jamaica’s defining series of Intuitive Eye exhibitions staged in 1979, 1987 and in 2006. He is also one of very few artists whose work has been featured on Jamaican postage stamps. In 1986, his famous Road Menders was one of four works selected for the “Intuitive Painters” set of four stamps, thus Tabois joined Dunkley, Kapo and Sidney McLaren in the pantheon of Intuitive Masters. His John Canoe at Guanaboa Vale was used on the Christmas issue of 2002.

In the nearly twenty years since the award of the bronze Musgrave medal in 1992, Tabois’ work continues to be marked by ever greater and greater refinement. Always reluctant to say a work is finished, he has often re-entered earlier work, repainting and retouching, constantly refining. As he says: “there’s always room for improvement.” The most recent of these repainted works is called Tribute to Rex and is a moving tribute to the late Rex Nettleford who collected his work and who opened one of his early exhibitions at the Institute of Jamaica. The wish expressed back in 1987 “I put out my effort. Hopefully I’ll die very old having accomplished a lot of good for mankind” is clearly being fulfilled.

For his contribution to Art the Council of the Institute of Jamaica is pleased to award Gaston Tabois the Silver Musgrave Medal for outstanding merit in the field.