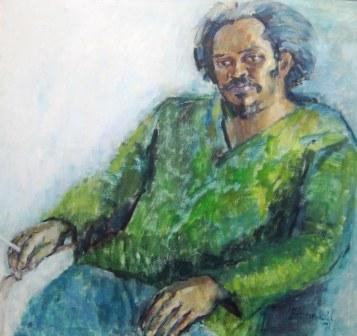 The National Gallery of Jamaica pays tribute to its past Chairman, the eminent Jamaican journalist John Maxwell, who passed away on December 10.

John Maxwell chaired the National Gallery from 1977 to 1980. Under his chairmanship, a more active temporary exhibitions programme was instituted which included the takeover and redevelopment of the Institute of Jamaica’s Annual National Exhibition in late 1977, while the educational role of the gallery was expanded with the establishment of a second curatorial position with responsibility for education. His revival of the National Gallery’s artists’ fellowship programme in 1977 was short-lived through lack of budgetary support but was awarded to Milton George, Everald Brown and Albert Huie.

John Maxwell is present in the National Gallery’s permanent collection by means of a portrait of him by Valerie Bloomfield, dated 1971.  The portrait is considered one of the finest examples of portraiture in Jamaican art.