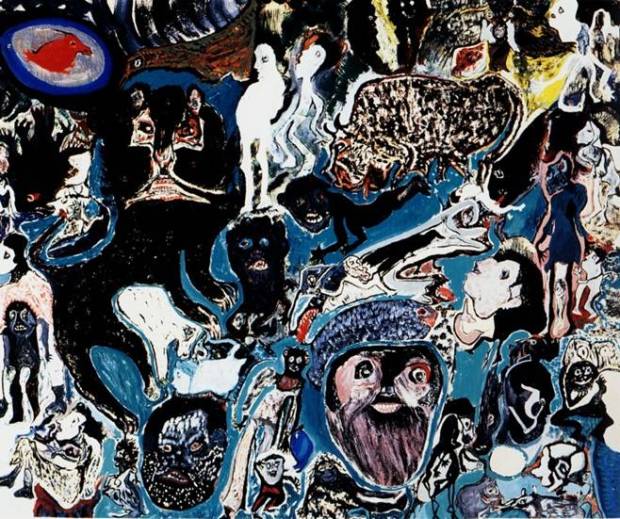 We continue building our archives on Jamaican artists with a post on the Intuitive painter Leonard Daley. This post is adapted from the Intuitives III catalogue, biographical information from our Education Department, and a tribute by Chief Curator David Boxer which was read at Daley’s funeral.

For me, the late Leonard Daley may well have produced one of the most original and impossible-to-classify bodies of work I have ever seen. Partly abstract, partly surreal, partly realist (in its depiction of birds, snakes or plants), it is always deeply spiritual. Daley’s paintings offer a rich stew of allusions to the power of natural forces, humankind’s relationship to the animal world, primeval spirits and the irrepressible fecundity of the earth. […] Perhaps in a way closely similar to that of Everald Brown’s visionary work, Daley’s semi-abstract images tap into and evoke a sense of Jamaica’s collective cultural consciousness — its collective memory or sense of its history.

The Intuitive painter Leonard Daley was born in Point Hill, St. Catherine, in 1930. He started painting some time in the 1960s but no works have been preserved from before 1979, when he first came to the attention of the local artistic community. He came to national prominence in 1987, when his work was featured in the National Gallery’s Fifteen Intuitives exhibition. While his visionary, spontaneously abstract expressionist work was well received by aficionados of outsider art and Intuitive art, it proved controversial with those in the Jamaican art world who had more mainstream, academic tastes and could not appreciate his work as “art.” Despite this mixed response, Daley’s work was widely exhibited and collected, in Jamaica and abroad and ultimately received significant critical acclaim. It was included in several other National Gallery exhibitions, such as Intuitives III (2007) and is represented in its permanent collection. Daley’s work was also included in several noteworthy overseas exhibitions, such as New World Imagery (1995), an exhibition of contemporary Jamaican art which toured in the U.K., Caribe Insular (1996), a Caribbean exhibition which toured in Spain and Germany, and Redemption Songs (1997), an exhibition of Jamaican Intuitive art which was shown in the USA. Daley lived in the Liguanea area of Kingston when his work was first discovered in 1979, and subsequently moved to the rural community of Fidler Hill in St. Catherine, where his self-built house was a work of art in  its own right with all surfaced covered with his paintings and sculptures. In the latter years of his life, he lived in the Jack’s Hill area of Kingston. He died in 2006.

Brother Leonard Daley initially came to the attention of the National Gallery during the run of the Intuitive Eye exhibition in 1979 when the then Brazilian Ambassador excitedly reported to the Gallery’s staff: “Come and See! I have found the Jamaican Hypollite,” referring of course to the great Haitian Primitive. David Boxer, then Director/Curator, immediately went with the Ambassador to view Daley’s work. He later recalled this first encounter with Brother Daley’s work:

In a darkened garage on Donhead Avenue, just up the road from Devon House, I entered a room that overwhelmed me with its intensity. My unease at the unabated angst that screamed from the walls was tempered by the extra-ordinary inventiveness of the depictions of the various animal and human forms, and the distorted tortured heads. No Hypollite, I thought, Bosch incarnate! Enigmatic surreal transformations were accompanied by dramatic shifts in scale and most unusually, ironic superimpositions: one image lying on top of another – the concept of surrealist juxtaposition in its most natural state. (I later discovered that he had been painting since the year of Flora 1962 and that he used to hang the paintings in the bushes at Cherry Gardens but they had all disappeared.) The huis clos atmosphere of the garage walls was encapsulated in the one available easel painting Dream which I promptly acquired and after pleading the case for more portable surfaces, I left Brother D, as the creator of these visions was called, to work out his nightmares and day traumas without the meddling of the trained critic.

It was too late to include him in the exhibition but by the time the second edition, Fifteen Intuitives, was staged in 1987, Daley could be exhibited to full effect and was quickly hailed as the most important new “discovery” among the Intuitives. His subsequent inclusion in exhibitions such as Home and Awayand New World Imagery, which was curated by Roger Malbert and Petrine Archer Straw for the Hayward Gallery in London, in the second Rastafari Kunst exhibition in Germany, and in the Redemption Songs exhibition which toured the U.S., placed him in the forefront of our living Intuitives. For the New World Imagery exhibition, Daley’s painting Pickpocket graced the cover of the catalogue. In 1999 Professor Barry Chevannes organized a one-man exhibition of Daley’s work at the Social Sciences faculty of the University of the West Indies. It was at the opening of that exhibition that I boldly declared Daley as “one of the truly great natural painters of the century.” In 2005 he was honored with a one-man exhibition at Cavin-Morris Gallery in New York.

Randall Morris, the proprietor of Cavin-Morris in his writings on the Jamaican Intuitives has likened Daley’s compositional mode to Dub Poetry:

I think of Daley’s work in the same frame of reference as Dub music. The basis of Dub is the removal of the melody line (the obvious narrative) to reveal the intricate interplay of percussion and bass. Effects are added by the dubbing DJ consisting often of echo, repetition, and deep reverb. In Daley’s Dub paintings by removing the obvious narrative he encourages us to see some of the deeper movements of the artworks and his fast-moving cagey mind. His personal connections between the multiple events are de-emphasized yet still serve as reference points as when he used the John Crow bird as an autobiographical indicator. Some of the characters, like this bird, do repeat painting to painting. Daley is laying out the situations, personal, spiritual, political, etc. that are real and symbolic at the same time, involving the viewer’s participation in the outcome. He […] telescopes time and details. This is a trait of Rasta reasoning as well; a free-form forum when Rasta’s discuss events, prophecies and philosophy. […] The rhythm of the painting continues; it is the perception of the viewer that changes and improvises.

Daley’s themes, as Morris points out, are “hardships, striving, gossip, man’s inhumanity to man; the battle of Good versus Evil in the common man’s daily life.” In many of his works, Brother D depicted himself as a John-crow. Many may despise the “John Crow,” Daley would explain, “but it is a useful bird. It cleans up the place.” Brother D believed that if he pointed out the ills of the society in some of his work he might actually assist in healing the society.

The society is clearly not healed but his artistry in carrying his message has had a profound effect on younger artists. His closest follower who became an important painter in his own right, Byron Johnson was murdered in 2002 but his legacy live on. Rex Dixon, David Boxer, among others have cited Brother D as an important influence on their own work. And in a recent interview the young Jamaican/Canadian artist Charles Campbell when asked to name his favourite Jamaican work of art responded:

I’m a big fan of Leonard Daley. There is remarkable honesty and insight in his work. “The Pickpocket” is one of my favourites.  If you ever have the good fortune to spend time in Leonard’s company he has a way of letting you see the divine spark at the root of everything and in all of us. He is a remarkable man.

He was indeed a remarkable man whose spirit lives on in a substantial body of remarkable paintings.