Ebony G. Patterson recently participated in the Ghetto Biennale, an alternative international art event in the Grand Rue slum of Port-au-Prince, Haiti, that was positioned as “as a counter exhibition, disrupting conventional art scene exclusions, as well as a bold conversion of global power systems, centers of art production, and cultural transmission”. She presented an installation of “flags” that brought her provocative “Gangstas for Life” iconography in dialogue with the spiritual splendor of the traditional Haitian Vodou flags or “drapos.” Ebony, who divides her time between Jamaica and Kentucky, is one of Jamaica’s most critically acclaimed and exciting emerging artists and her recent contribution to the Ghetto Biennale presents a good opportunity to share some of her work with our readers. 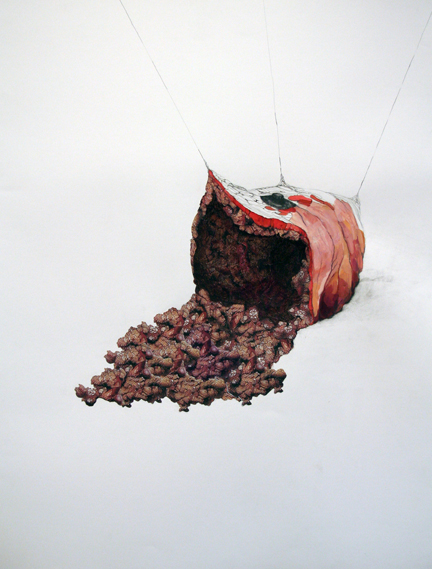 “Beauty, Gender, body and the grotesque are an ongoing discussion in my work. I am enthralled by the repulsive, the bizarre and the objectness of bodies and the contradictions that both have to art historically and culturally. The Jamaican vernacular, gendered cultural symbolisms and stereotypes serve as a platform for these discussions. I am enthused by words, conditions and experiences that objectify and abjectify.”

Ebony G. Patterson was born in 1981, in Kingston, Jamaica. She attended the Edna Manley College of the Visual and Performing Arts, from which she received an Honors Diploma in Painting, and subsequently, the Sam Fox College of Art and Design at the Washington University in St. Louis, where she obtained a Masters in Fine Arts in Printmaking and Drawing in 2006. She lives and works in Lexington, Kentucky, where she is Assistant Professor of Painting at the University of Kentucky, and in her hometown of Kingston, Jamaica. Patterson has exhibited at the National Gallery of Jamaica, in major exhibitions such as the National Biennials of  2004, 2006 and 2008, and Curators Eye II (2005) and Curator’s Eye III (2008), and has been included in several major recent survey exhibitions of Caribbean art, such as the Infinite Island (2007) at the Brooklyn Museum and, currently, Rockstone and Bootheel at Real Art Ways in Hartford, Connecticut. She has presented five solo exhibitions thus far, in the USA and Jamaica, the most recent of which was Gangstas, Disciplez + the Doiley Boyz (2009) at the CAG[e] Gallery of the Edna Manley College in Kingston. Patterson has also received several awards, including the Prime Minister’s Youth Awards for Excellence, in Art and Culture (Jamaica) in 2006.

From Venus to Gangstas

Ebony G. Patterson’s work revolves around questions of identity and the body, and takes the form of mixed media paintings, drawings and collages, most of them on paper. Photography, found objects, installation and performance have recently become increasingly important in her practice..

Patterson’s early work was primarily concerned with the female body as object. Her Venus Investigations objectified the female torso, headless and anonymous, and explored the relationship between the ample-bodied “Venus” or female goddess images of prehistoric times and contemporary female self-images and beauty ideals.  Subsequent works more provocatively focused on the vagina as an object and, by implication, examined the taboos that surround this body part and its functions within Jamaican culture. This also led to 3-dimensional constructions made from intimate female articles such as sanitary napkins and tampons and more abstracted  and surreal hybrid organic forms that appeared in her large paper collages of 2007. This early body of work has a sober and at times even majestic visual beauty which as she puts it, reference “beauty through the use of the grotesque but visceral, confrontational and deconstructed.”

More recently, Patterson’s attention has shifted to the male body and male identities. In 2008, she started exploring the phenomenon of skin bleaching among Jamaican males and its remarkable popularity among Jamaica’s “most wanted” gang members. This evolved into her current body of mixed media collages, Gangstas for Life (2008– ), which explores the shifting and contradictory notions of masculinity in Dancehall culture. The series, which is shown in installation contexts, consists of ornate portrait-like images of young Jamaican males that are glamorized with glitter, paper doilies, and elaborately patterned wallpapers, fabrics, and wall stencils, and combined with gilded toy soldiers and brightly colored toy guns that ironically refer to the trivialization of gun violence in contemporary Jamaican culture. Patterson thus probes the contradictory interplay between the hardcore masculine posturing of the “gangsta” and the feminized personal aesthetic that is now the norm among males in the dancehall culture and exemplified by such practices as skin bleaching, eyebrow shaping, and the wearing of flamboyant clothing and “bling” jewelry and accessories. 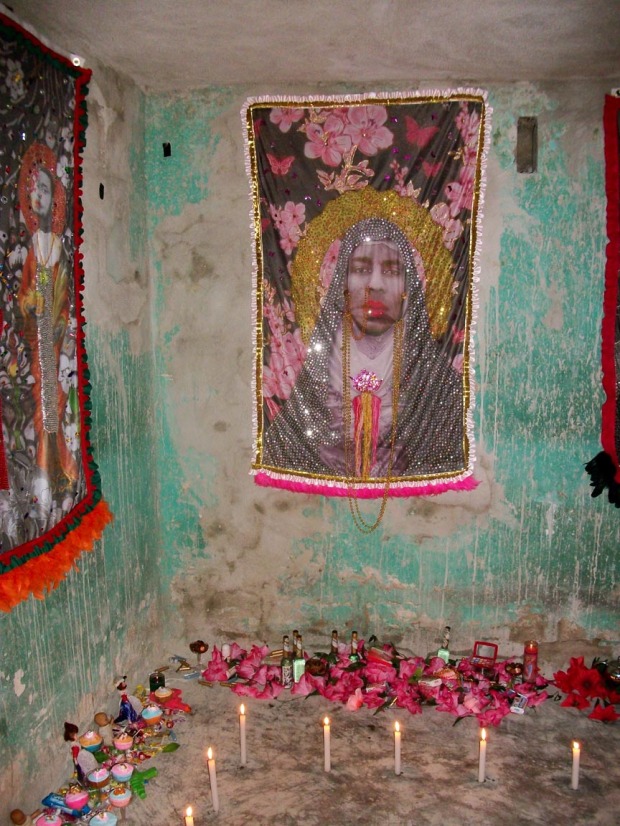 When Gangstas, Disciplez + the Doiley Boyz was shown at the CAG[e] gallery, several visitors had pointed out the aesthetic similarities between the works on view and the sequined Vodou flags or of Haiti, which represent specific “loas” or Vodou divinities. This formal relationship, the boundary-crossing gender dynamics in Haitian Vodou culture in which practitioners are frequently possessed by loas of the opposite gender, and the similarities and connections between the gang cultures of Jamaica and Haiti became the point of departure for her entry into the 2009 Ghetto Biennale in Haiti. For this project, Patterson recontextualized photographic images of young black males within the iconography of Haitian Vodou, referencing the loas Erzili Danto, Erzili Freda, Ren Kongo, Ayida Wedo and the Marasas (sacred twins) — all except for the latter female. The foundational images had been printed on fabric and she worked with a Haitian Vodou flag maker to sequin and otherwise embellish them, effectively turning them into drapos dedicated to each of these loas. The five large drapos were installed, along with traditional and  not-so-traditional offerings for the loas in question, inside the main room of one of the Grande Rue dwellings for a one-day exhibition. The installation captured the splendor of the sacred arts of Haitian Vodou and the bling aesthetic of contemporary gangsta culture and provocatively merged and interrogated the spiritual and the material, the male and female, the traditional and the contemporary, and the Haitian and the Jamaican.